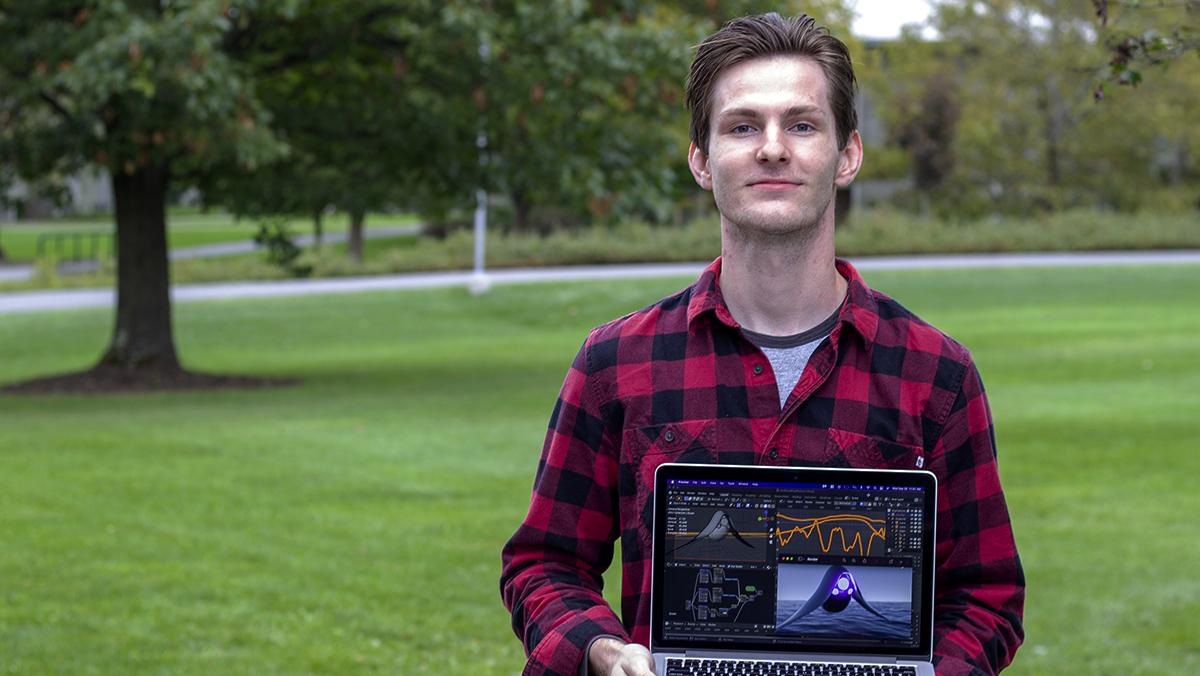 Thomas Kerrigan/The Ithacan
Senior Norman Staub said he welcomes the changes to the department. Staub said he initially wanted to pursue a minor in computer science but instead chose game development as a result of limited availability in classes that were required for the computer science minor.
By Elizabeth Kharabadze — Contributing Writer
Published: October 20, 2021

Some programs in the Ithaca College Department of Computer Science are being renovated to offer more flexibility in course selection for students.

The department is planning to merge its three minors — computer science, web development and game design — under a newly-designed computer science minor. Students under the new minor will be able to continue taking classes that were previously offered under the three minors. Additionally, students seeking more structure could follow a persona — a special concentration within the department. Game design and web development will be making appearances in the personas, along with software engineering, data and artificial intelligence and systems programming.

The changes, though not directly related, come amid the restructuring of academic programs under the Academic Program Prioritization (APP) in order to create connections across schools and disciplines. Under the second phase of the APP, committees across the five schools will oversee changes to the admissions application process, curricular revision, reorganization of programs and oversight of graduate programs.

Toby Dragon, associate professor and interim chair of the Department of Computer Science, said the new minor will be designed to give students the flexibility to create an experience that is unique to them. While admission to the web development and game design minors have been closed for Fall 2021, he said he hopes the program will be available for students by Fall 2022.

“Our field is so broad that four years is not enough,” Dragon said. “We need to provide an education that gives them kind of a core understanding … instead of pushing them into one specific track … we’re hoping they get some … choice to explore the kind of computer science that they’re interested in.”

The Bachelor of Arts in Computer Science is also undergoing changes. Dragon said he hopes to implement a new integrative project course in the major that would help to bridge the gap between computer science and other disciplines.

“We’re not necessarily changing things fundamentally, but rather adjusting the kind of paperwork of the program to recognize the reality of how our students are operating and what we should be promoting in the department,” Dragon said.

“I think it’s a great change that they’re all being merged because the minors were so similar to begin with that it didn’t seem worth it to sort of put a name to each of those minors,” Staub said.

In the future, Staub said he sees himself working in the visual effects industry. He said there were many connections between the game development minor, his major in emerging media and his work as executive producer at Park Productions, which he hopes to make in his learning.

“I chose game development … because especially now and into the future, those two industries, film and game development, are sort of crossing over in a lot more ways than they ever have,” Staub said.

Junior Laci Young said she appreciates having structure to course selection, but also likes the idea of having more choice in elective classes.

“I think this is where we are given the chance to really experiment in our field and find the direction we want to go in after school,” Young said.

Young, who said she transferred to Ithaca College from SUNY Broome Community College, in Binghamton, New York, was initially attracted to the Ithaca College Department of Computer Science because of its wide range of courses. Young said when registering for courses for Fall 2021, she noticed lots of availability in both required and elective classes for her major in computer science.

“There are many jobs available with a computer science degree, so I think Ithaca College does a good job at helping us figure out where we actually want to go with it,” Young said. “The flexibility lets us gain our knowledge in the fields that we are more interested in.”

According to the U.S Bureau of Labor Statistics, employment in computer and information technology related occupations are expected to grow 13% from 2020 to 2030, adding about 667,600 new jobs to the economy.

Sophomore Elizabeth Richards said she is looking forward to the changes in the department as a chance to show off her creative side. Through her internship with Girls Who Code from June to August 2019, Richards said she developed an interest in computer science.

“I knew that if I could implement the way that I think creatively when it comes to computer science — which was something that was completely foreign to me back then — that I might be able to succeed in creating that career, so I pushed myself into that direction,” Richards said.

Much like the diverse course selection based on her interests — ranging from courses in animation to theatre — Richards said she looks forward to more freedom in course selection within the computer science department.

“You should be at liberty to take things that you want to take because you’re interested in [them], not just because they’re required courses,” Richards said.