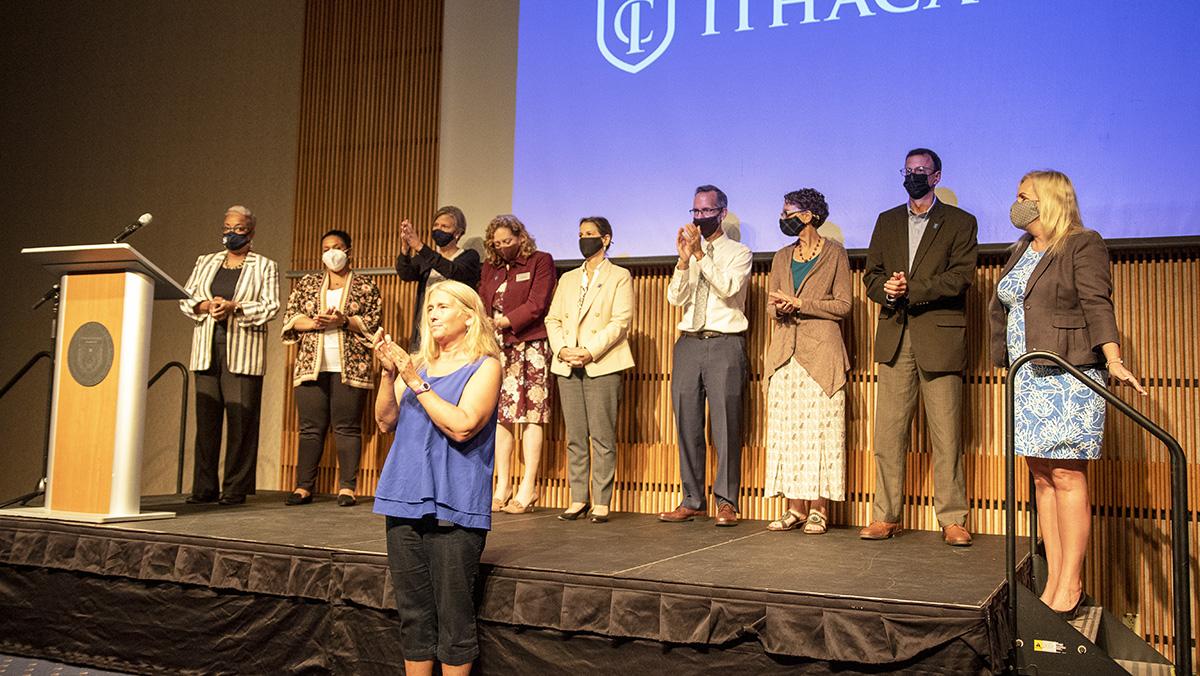 Ithaca College is beginning to move into the second phase of the Academic Program Prioritization (APP) process, which involves the restructuring of some academic programs.

The APP process began in September 2020 when Interim President La Jerne Cornish convened the Academic Program Prioritization Implementation Committee (APPIC) and the Academic Program Prioritization Advisory Committee (APPAC) and provided them with their tasks. As part of the strategic plan, Ithaca Forever, Cornish has said that the APP was supposed to take place over a period of four years, but had to be accelerated because of the COVID-19 pandemic’s impacts on the college’s finances. The college released the draft of the “The Shape of the College” document Jan. 13, 2021, which drew criticism from many members of the campus community.

The document was written by the APPIC and it detailed the entire APP process. The first phase of the APP included the elimination of 116 full-time equivalent (FTE) faculty and 26 majors, departments and programs.

Cornish said the second phase will focus on reorganization and restructuring with the idea of creating connections across schools in mind.

“I am pleased that this important work is progressing under the able leadership of Interim Provost Melanie Stein, with the assistance of multiple partners from across campus,” she said via email.

The first phase received backlash from many members of the campus community throughout the 2020–21 academic year. Multiple groups were formed, like a chapter of the American Association of University Professors (AAUP), the Open the Books (OTB) coalition and IC Alumni Against Austerity (ICAAA), in opposition of the cuts. OTB and ICAAA held multiple protests and forums throughout the last academic year, which were focused on educating the campus community members on the cuts, as well as expressing their disagreements regarding the cuts. Most recently, ICAAA created a portal to allow current and former students, faculty and staff to submit anonymous complaints against the Senior Leadership Team (SLT) and the Board of Trustees.

Stein said the second phase has begun and work is being done by specific committees.

She said changes in the admission application process, curricular revision process, the formation of a committee focused on what faculty positions need to be searched for, conducting an inventory of reassigned time for faculty across schools at the college, reorganizing programs and centralizing the oversight of graduate programs overseen by Christina Moylan, associate provost for graduate and professional studies, are all part of the second phase.

Stein also said the general timeline for the second and third phases to be completed is in the next three years.

“Having said that, these phases include a broad range of projects, each with their own timeline,” Stein said via email. “For example, the Physician Assistant program which was just launched is a perfect example of growth.”

The Physician Assistant (PA) program was launched in Spring 2021 and welcomed its first class in Fall 2021 with 30 students. The program will continue to grow until it hits its full capacity of 50 students per cohort.

At an All-Faculty and Staff meeting in May 2021, Cornish said the department moving would be a good way to explore the relationship between theater arts and music. Stein said via email that faculty and staff are involved in conversations surrounding the move and how it can strengthen student experiences.

Stein also said figuring out how to move forward with the theater arts department is a step that needs to be taken before resuming the dean searches. The college currently has four interim deans: Jack Powers in the Roy H. Park School of Communications, Alka Bramhandkar in the School of Business, Ivy Walz in the School of Music and Claire Gleitman in the School of Humanities and Sciences. Gleitman was named the interim dean because Stein took on the position of interim provost for the academic year.

The college decided not to conduct the dean searches in the 2020–21 academic year because of the COVID-19 pandemic. The interim deans will remain in place for the 2021–22 academic year.

“There are some scheduled sessions to hear from faculty and staff from both units about what this might look like,” TenEyck said via email. “So we are early in the process.”

“I am looking forward to hearing from faculty and staff about benefits, and so far, I have heard ideas around collaboration, curriculum and admissions,” she said via email.

Walz also said the search for the new dean of the School of Music is in the early stages of the conversation.

“The students who are in the music school are interacting with people from the musical theater program,” she said. “There’s so many different events and auditions that are interconnected. It would just make more sense for all the information to be distributed to all of the students in one way.”

Dhir said she missed out on opportunities like auditions because the School of Music and Department of Theatre Arts are not very connected. However, she also said she was not fully aware of what the second phase of the APP was, but she thinks a lot of the things that will happen are good ideas.

“It all sounds like positive business ventures for Ithaca College,” Dhir said. “It doesn’t seem like anything that would negatively impact students; it all seems like this is positive reorganization.”

However, Dhir did say that she felt like there was not a lot of communication about the second and third phases.

“A simple email is enough to tell us what’s going on,” she said.

Stein also said the college is reexamining the admissions process. The Shape of the College document recommended broadening the way students apply to specific schools within the college.

The Park Pathways program was included in the Shape of the College document. The program is expected to start in the 2022–23 academic year. Students can apply undecided to the Park School, take a variety of classes in different departments throughout their first year and would then declare a major their third semester.

Jeane Copenhaver-Johnson, associate provost in the Department of Academic Affairs, and Stacia Zabusky, senior associate dean for curriculum and undergraduate programs in the School of Humanities and Sciences, are the co-chairs of the Curricular Revision Liaison Committee (CRLC). Copenhaver-Johnson said the CRLC is meant to support faculty while departments begin to think about curricular revision. She said this is a way to support student achievement and success while at the college. However, she said many of the revised curricular changes will be seen starting Fall 2023.

“Students in some departments may be consulted as their faculty consider changes to programs or majors, as also happens during the regular program review process,” she said via email.

Copenhaver-Johnson said departments can begin submitting proposals for their curriculum changes this academic year. She said the CRLC will be working with the Academic Policies Committee (APC) to review curriculum proposals on a rolling basis.

Copenhaver-Johnson said the revisions vary from department to department, depending on how recently the curriculum was last revised or what faculty have been thinking of doing to their curriculum.

“We already have been hearing many innovative ideas from some departments and look forward to collaborating with our colleagues on these exciting curricular developments,” she said via email.