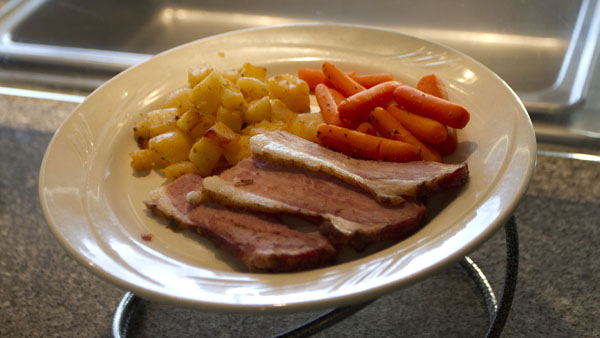 As Sodexo prepares to present the first part of an Eating on Campus Tour series, which will explore the options provided by Ithaca College Dining Services, students debate whether dining options effectively cater to the needs of students on special diet restrictions such as veganism, vegetarianism and gluten-free.

Eating on Campus Tour One will take place from 11:30 a.m. to 12:30 p.m. April 4 in the Terrace Dining Hall and will feature Simple Servings and the Food Lab, two specialty food stations created last spring. Simple Servings was established in January 2013 to provide allergen- and gluten-free food and eliminate the use of peanuts, tree nuts, shellfish, wheat, soy, milk products, eggs and gluten.

However, several students feel they are struggling to maintain their dietary restrictions while at college. Freshman Emily Horowitz, a vegan, said it has not been an easy task maintaining her diet with the limited number of options available for the high cost of a meal plan.

“It’s unfair that I am paying the same amount of money for just a salad and a piece of fruit as a student munching on five hamburgers at every meal,” she said.

While Horowitz said she commended the effort of Dining Services to try to meet her needs and those of others like her, she also said some changes could allow students like her to opt for less costly or more diet restriction–suited meal plan options.

Sophomore Adam Ball, who became a vegetarian a year ago, said he ends up eating the same food most of the time in the dining halls. Ball said it is challenging to be on a meal plan with so few options, and it seems the college does not trust students enough to cook their own food and opt out of meal plans.

Junior Blaize Hall, a pescatarian, said the college should not require meal plans.

“Honestly, just let students choose if they want to be on a meal plan or not,” she said.

Hall also said the few pescatarian options the dining halls do have, namely fish, are not appealing. Another pescatarian, freshman Melani Lopez, said she has grown used to the repetitive food choices but would like to see more varied options.

“One day, I can eat most of what is available, the next day I can only eat one thing,” she said. “They need to spread out the options and vary them.”

Molina said feedback is used to make subtle changes in the menus over the course of the semester, but for the most part the main menus remain the same.

In order to cater to special diets, all varieties of food are served together, Molina said. For example, one food line will contain both meat and vegetarian options prepared separately.

Junior Kira Hovancik said she became a vegetarian after moving off campus and now prepares her own food. She said if she were a vegetarian while she had a meal plan, it would not be easy, but she appreciates the effort of the dining halls to lessen the use of meat in the menus by providing options, particularly meatless Mondays at the Food Lab in Terrace Dining Hall.

Jeff Scott, area general manager of Ithaca College Dining Services, said the vegan station in the Campus Center Dining Hall was set up 14 years ago and has since aimed to serve the needs of students with dietary restrictions.

He said Ithaca College Dining Services has always strived to provide the best food for students with all kinds dietary restrictions by making sure their needs are met as best as possible.

The last few decades have been interesting, Scott said, because vegetarianism, veganism and gluten-free diets have been on the rise, with millennials leading the charge, as influenced by increased nutrition education.

According to a 2011 study from the Social Science and Medicine journal, the millennial generation has grown up with publicized messages relating to nutrition and social activism, which has led to a wide variety of diets such as vegetarian and vegan.

“Students now come in with all types of new dietary restrictions and food intolerances that encourage my staff and I at Ithaca College Dining Services to continuously expand and improve our services,” Scott said.

Freshman Mackenzie Gannon, who has fatal allergies to dairy products and eggs, said she is thankful that when she applied to the college, Dining Services took steps to ensure that she would have access to safe food, unlike other schools.

“I am very happy that Ithaca College is one of the very few colleges that is ready to take care of my special dietary needs, something that allows my parents to sleep peacefully at night,” she said.

Muneer is a student employee of Ithaca College Dining Services.