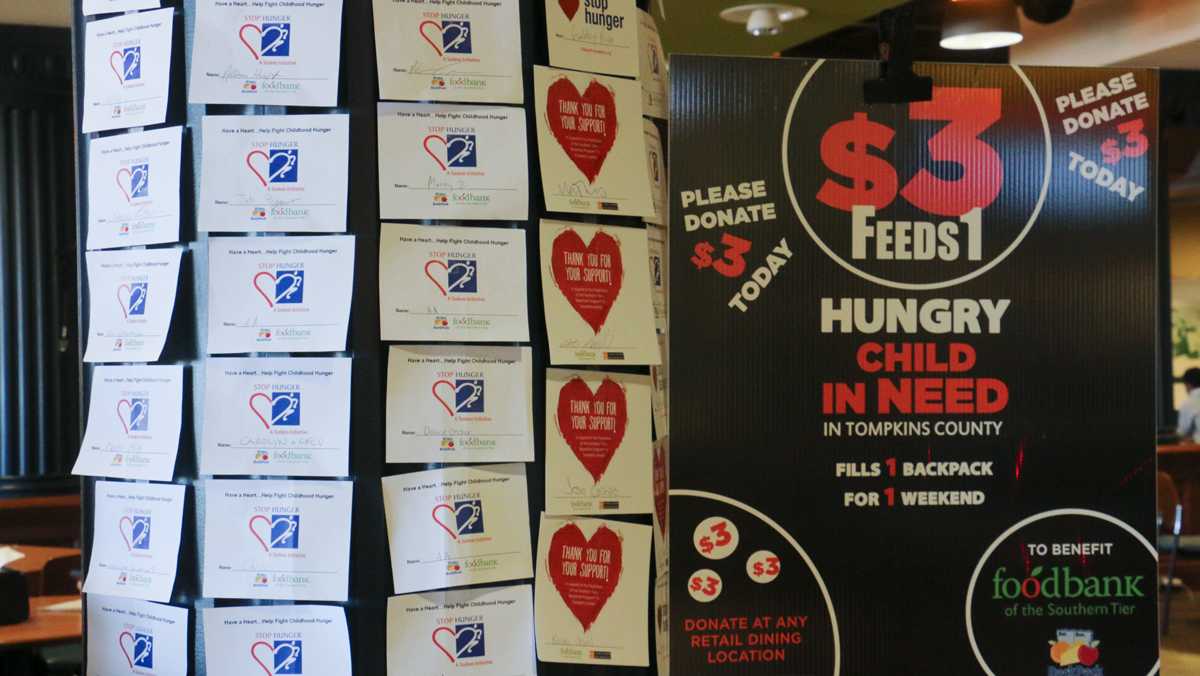 Julia Cherruault/ The Ithacan
Dining Services partnered with the BackPack Program of the Southern Tier to raise money for meals for children in need in Tompkins County.
By Simon Rosenbluth — Contributing Writer
Published: October 30, 2017

Ithaca College Dining Services has been holding a food drive to raise donations for the BackPack Program for the Food Bank of the Southern Tier, to provide meals for children in need in the Ithaca area.

The food drive, which began Oct. 4 and ends Nov. 3, collects donations at retail dining locations across the college’s campus, including the IC Square Food Court, SubConnection, Circles Market, Dillingham Cafe, Sandella’s Cafe, the Library Cafe, Gimme! at the Business School, the Cafe at the Roy H. Park School of Communications and the Center for Health Sciences Kiosk. According to the promotional flyer for the event, a goal of $5,000 has been set for the drive, which would provide 1,666 meals to children in need. Rebecca Sexton, marketing manager for Dining Services at the college, said that over $1,100 has been donated so far.

The BackPack Program of the Southern Tier was ranked the 2017 food bank of the year by Feeding America, a U.S. hunger relief organization, out of over 200 food banks across the U.S. The BackPack program provides food for 44 school districts in six counties, reaching over 100 schools. Jennifer Edger, director of Community Programs at Food Bank of the Southern Tier, said the process her organization goes through to feed children in need requires help from the community. She said the organization uses the donations to purchase food for the program. Volunteers then come to help pack and distribute the food, she said.

“Our meals are very kid-friendly and nutritious, we make sure kids are eating healthy and have a balanced diet,” Edger said.

The BackPack Program will take the proceeds from this drive and distribute food to children in need throughout Tompkins County within the next few months, she said.

“We will utilize the funds from this drive by the beginning of next year, 2018,” Edger said.

According to Data USA, an online platform that shares U.S. government data, the poverty rate in Tompkins County is 20.5 percent, 6 percent more than the national average.

This food drive is one of many that has been hosted by the college’s Dining Services. Jeff Scott, director of Dining Services at Ithaca College, said they has been working hard to give back to the community, pointing to past drives as evidence of their determination. to try to get more people within the college community involved in charity work.

Scott said that BackPack has reached out to Dining Services in the past since the program is underfunded and in need of resources to help provide for Tompkins County. Over the past decade of collaborating, Dining Services has donated food instead of monetary funds to the organization, he said.

“We’ve been doing a variety of food drives for a number of years,” Scott said. “We’ve made a conscious effort to invite the community in to donate with funds, especially at checkout and cashier stations.”

Scott said the impact these food drives have is not only significant, but also cost-effective, as just $3 feeds one hungry child.

“What’s pretty exciting about this is you take a dollar, and you turn it over to the food bank, you’re feeding three or four more people with meals instead of what one dollar could do if it was donated in canned goods,” Scott said

Sexton said she is confident that the goal of $5,000 will be met by the end of the drive. She said they usually exceed their goals, and past drives have been successful.

“We’ve been driving hard to get thousands of donations from the IC community every year, and we’ve superseded those goals,” Sexton said. “We had a goal of $5,000 one year and we collected almost $11,000.”

Joey Nastars, senior and cashier at the Cafe at the Roy H. Park School of Communications, said he has noticed many students donating to the food drive. He said that because of this, he believes the $5,000 goal will be met.

“There’s a lot of people that come to this cafe, so it’s usually top three for the most donations,” Nastars said.

This recent food drive is just one of many that Dining Services plans on participating in as they continue to address malnourishment in the area. Not only do these drives help locals in the surrounding areas, but they also benefit students at the college who struggle with a lack of access to food.

“There are even students here on campus who are in need of affordable food, and we have a food pantry coming on campus once a month,” Sexton said.

The food pantry is a mobile station that provides fresh produce and other groceries to students on campus and is open to anyone.

Similar donation-style drives will also take place in the coming seasons as the college is constantly looking for ways to raise funds, Sexton said.

Sexton said there will be another food drive around the holidays this winter called “Seasons Greetings,” as well as one in the spring.

The Ithaca College community donated 120 pounds of food last Wednesday for Cans Across America, a nationwide, one-day-long initiative to stop hunger. The college, which donated the food it collected to a local food pantry, increased its donations by 15 percent from last year. Senior Melissa Horowitz, who works as the marketing intern for Ithaca…