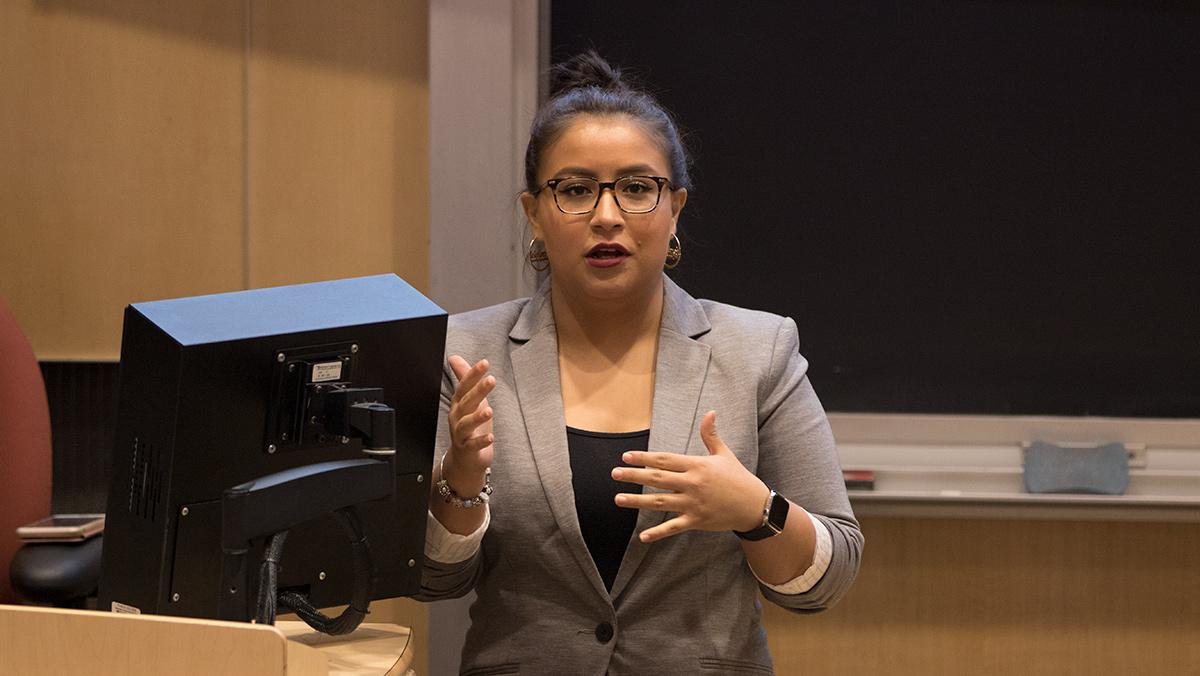 Since 2013, Dior Vargas had been involved in activism work for women’s reproductive rights and domestic violence awareness. When she turned to mental health, she found that people of color were missing from the conversation.

“That’s when I Googled mental health. I was like, ‘What are people talking about. What’s happening when it comes to that term?” Vargas said. “I saw that it was all white women. I was like, ‘That’s weird.’”

Vargas, a Latina, feminist mental–health advocate, spoke at Ithaca College on Sept. 28 at the invitation of PODER, a Latino student organization on campus. During an address centered on the lack of representation of people of color in mental–illness discussions, Vargas shared her own story: She said she had been diagnosed with depression and anxiety herself, and that she is a survivor of a suicide attempt. Vargas said she decided to become an activist to share her story with other people of color and to draw attention to the lack of intersectionality in discussions about mental health.

Vargas took this matter into her own hands and started the People of Color and Mental Illness Photo Project, which invites people of color to submit photos of themselves with a piece of paper that has their mental illness written on it. The hashtags “#NoStigma” and “#NoDiscrimination” are used to brand the project.

It was her diagnosis that motivated her to create this photo project, she said, which is aimed at suppressing stigmas about mental illness, especially within the Latin American community. She said they are often less likely to seek mental–health care due to the feeling that there is a lack of diversity among therapists they could connect to.

During the event, Vargas asked the audience for their opinions on the term mental health. Students expressed a consensus that mental health is commonly desensitized or swept under the rug in society.

Freshman Kyra Campos-Marquetti said she thinks mental health is an important topic to talk about. She said she believes the college should have spaces for people to talk about topics like the ones Vargas presented, especially since they are more uncommon among people of color.

“It’s really nice, as a person of color, having someone talk about a narrative about people of color in a predominantly white school,” she said. “I really liked that she was open and honest and wasn’t afraid to be vulnerable and really tell her story, and I like that she gave us time to tell ours if we wanted to.”

PODER is always looking to expand its horizons to people of different backgrounds, said junior Luis Torres, the group’s public relations officer, who helped organize the event. This month, the organization is focusing on self-care, which is a huge part of mental illness, Torres said. He said he thinks Vargas is a well-known advocate of self-care among the Latin American community, which is shown in her work and lectures.

“I think at Ithaca College, we’re very good at talking about mental health, but we don’t necessarily always include people of color in those conversations,” Torres said.

He said he hopes people of color can take one thing, if not more, away from the event: that having trouble talking about mental illness isn’t their fault.

“It’s an issue that’s ingrained in our system and ingrained in our cultures, and as long as we start talking about that and recognizing that and addressing it, we’re going to be in a much better place,” Torres said.

Jonathan Ablard, associate professor in the history department, said he was very intrigued with what Vargas had to say. He said he believes there should be more communication between students and the faculty about mental illness.

“One of the things that came out for me, by hearing the students, is that mental–health needs of students are not being met,” Ablard said. “I think it’s clear that faculty could help students better if there was more outreach to us, educating us about things that are going on.”