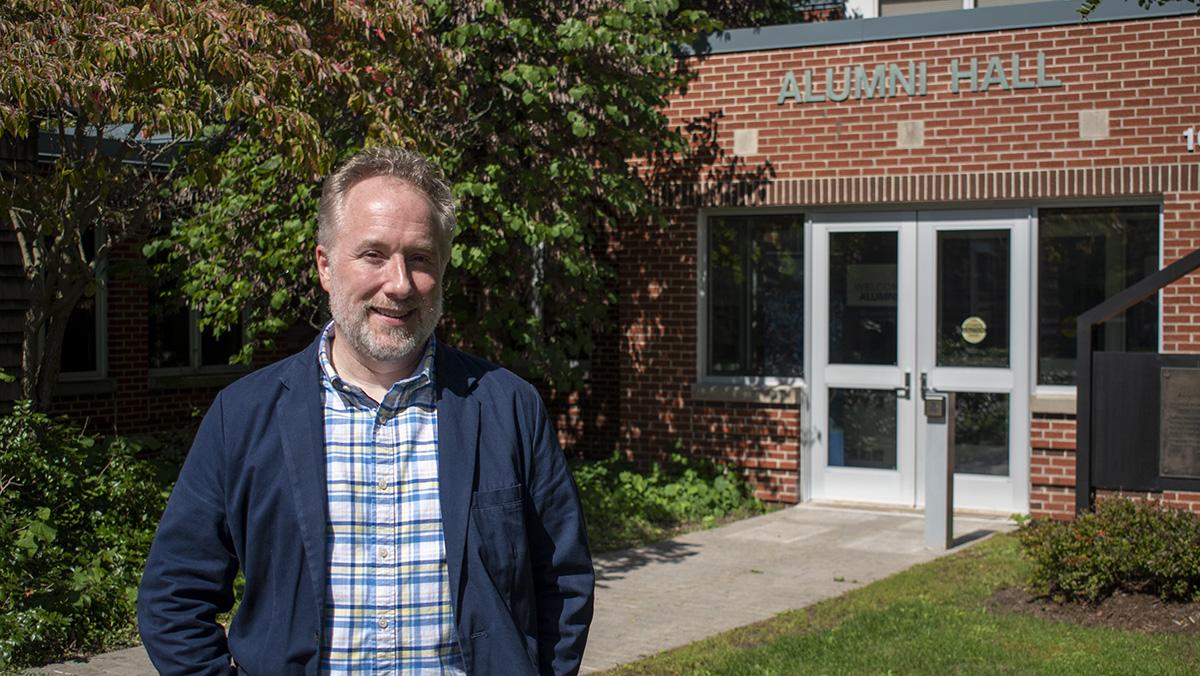 Elijah Cedeño/The Ithacan
Brett Bossard ’95 began his position as the new executive director of Ithaca College’s Office of Alumni and Family Engagement on Sept. 19. Contributing writer Funmi Omotosho sat down with Bossard to discuss his career journey, his transition to the college and his hopes for his new role.
By Funmi Omotosho — Contributing Writer
Published: September 27, 2022

Bossard grew up in Hornell, New York, and came to Ithaca College for his undergraduate studies. He graduated from the Roy H. Park School of Communications with a bachelor’s degree in television and radio and a concentration in scriptwriting.

Contributing writer Funmi Omotosho sat down with Bossard to discuss his career journey, his transition to the college and his hopes for his new role.

Funmi Omotosho: What life and career skills did you learn during your time as a student here at Ithaca?

Brett Bossard: So many, really — I think career skills, certainly. I think I made pretty good use of the talented people in the writing department. … I really think, regardless of what career path anyone takes from Ithaca College, the skills to write persuasively and to create a message that is compelling is a skill that transfers to any career set. … Being an effective communicator is something that is so important and valued, especially in today’s information-overload world. Being able to cut through the noise is something that Bombers can do well because of the people we have on campus.

FO: For the past nine years, you were the executive director of Cinemapolis, Ithaca’s only independent film house. What made you want to come back from your hometown and work in Ithaca?

BB: Well, prior to that, I was the executive director for the Community Arts Partnership of Tompkins County. So I had a fair amount of interaction with Cinemapolis as it was one of our art centers in the county. I thought [working there] was just a great opportunity for me to both apply the skills I’ve learned working in nonprofit management and arts administration for the previous 15 years or so … and my level of nostalgia for Cinemapolis. … When I was in school here, I spent a lot of time at the old Cinemapolis where the Transmedia Studio is now, … finding people like me who loved independent film and international cinema, I learned to understand how important that kind of communal experience can be for a community and for the potential of making change. The chance to come back to that environment and act as a leader and a collaborator with other members of the community, to see that place advance and thrive, was something that was too hard to pass up.

FO: Most people don’t see the correlation between working at a film house and then coming to IC to work in the Office of Alumni and Family Engagement. What made you want to come back to your alma mater and, more specifically, to work in this office?

BB: Probably, on the face of things, people might not see the connections. But I think there’s actually a fair amount of similarity there. I feel like when I was at Cinemapolis, it was a lot of audience development and sort of making sure that we had a place that was welcoming to a variety of ideas and a variety of people from all the different communities that make up Tompkins County. That idea of relationship building and audience development applies really well to the kind of relationship that I think the institution wants to have with the alumni and family that are engaging us as part of the campus community. I’m very honored to have been chosen to come back and serve the alma mater in this way. …It’s a chance for me to get back to the institution; it’s a place that I feel was a very crucial part of my development and any success that I had. … It’s a great way for me to give to the campus in a way that can make use of the connections that I already have to the community, having been really tied to Ithaca. … I’ve really focused on making sure that there are opportunities for people to work together toward a common goal to make [Ithaca] a better place to live. And, hopefully, those experiences and those relationships are something that we can put to work to help the college.

FO: You’ve hopped around a lot in your career, even when you started from the time as a student until now. So do you have any advice for students who may be transitioning between different majors or passions or career paths?

BB: I’m a Gen Xer, and I think we might be the first sort of generational cohort that were faced early on with the idea that a career path may not be linear. … It’s hard to see that when you’re just starting out in school. … I think my first piece of advice is think about who you are as a person and what skills you’ve developed while you’re here, … think about how they might be applied in a way that is fulfilling for you as a person and ways that will be productive for the greater good of the community that you decide to live in. I think that Ithaca College is great at preparing people to contribute to the community where they decide to live. …The chance to give back is something that’s really sort of baked into the programs we have here and I think that’s great.