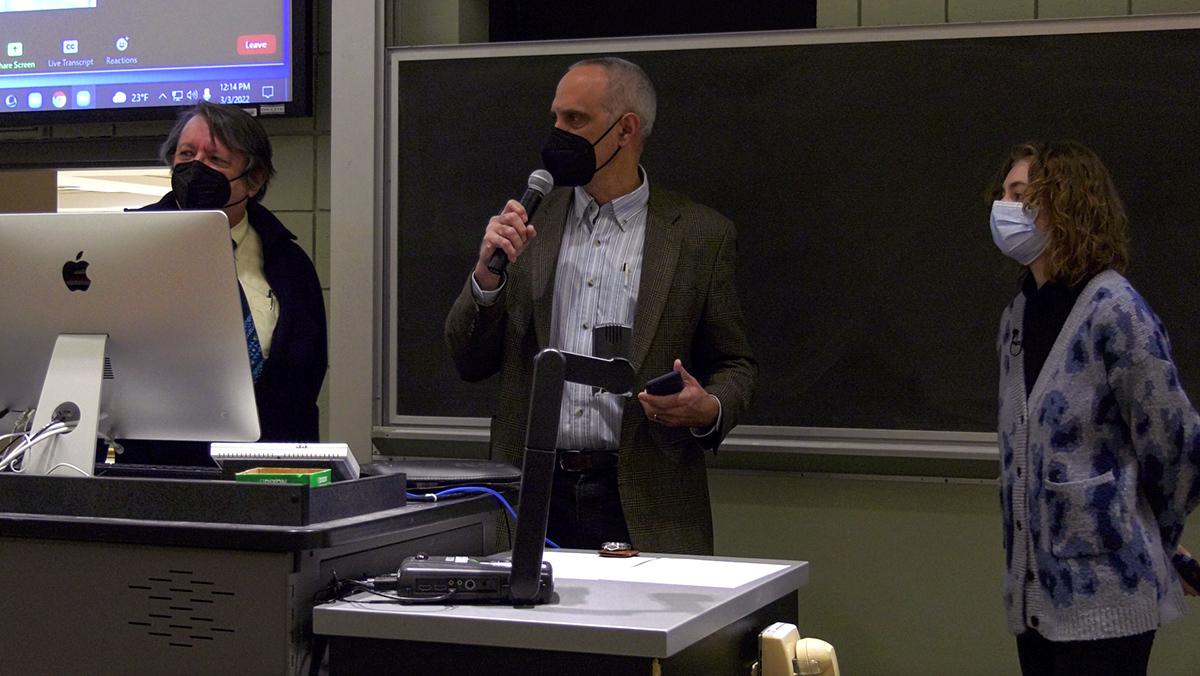 Over 550 people showed their solidarity with the people of Ukraine and their investment in the war waged by Russia when they attended a discussion panel at Ithaca College on March 3.

The event was co-hosted by the Ithaca College Department of History and the Finger Lakes Environmental Film Festival. The special session was created to provide a space for discussion and education about the war. The conversation was designed to provide historical context and tell stories of the war and the suffering it has caused, emphasizing solidarity with the people of Ukraine. Zenon Wasyliw, professor in the Department of History, and junior Daria Karpenko, an Ithaca College student from Ukraine, presented at the event, which was hosted both in-person and on Zoom.

Russian troops invaded Ukraine on Feb. 24. In the days since, Russian forces have targeted cities across the country, including the capital, Kyiv. The U.S. and other countries have responded to the war by placing sanctions against Russia and condemning Russian President Vladimir Putin. The invasion could evolve into international war if Russia advances through Ukraine and into surrounding nations that belong to the North Atlantic Treaty Organization (NATO).

Wasyliw, who is a specialist in Soviet, Ukrainian and global history, began the event by sharing some of Ukraine’s history and the interactions that have led to the war. Wasyliw said there is a long history of trauma for the people of Ukraine, especially at the hands of Russia and the former Soviet Union.

Karpenko said she was born in Ukraine and lived there for 16 years. She came to the U.S. for college, while her family remains in Ukraine. Growing up in Ukraine, Karpenko said schools, summer camps and individuals told stories of World War II, but people did not believe that another war would hit the country.

“I remember, when we left, all we could think about is how grateful we are to never have to experience anything like that,” Karpenko said. “I honestly don’t know how to talk about war, but my grandma does because it hit me yesterday, it’s her second war.”

Karpenko said social media has been a significant part of the global discussion of this war, and it is both good and bad. She said she has used her own social media to spread information and resources about the war. However, people see so much of the war on social media that in the U.S,. many turn off their phones and put the war aside, Karpenko said.

“It’s the world’s issue,” Karpenko said. “For 80 years everyone was saying ‘never again,’ but for the first few days of the war all of the Western countries seemed to be hesitant and confused, while some children in Kyiv and Kharkiv and many other cities were spending their second night underground falling asleep to the sound of explosions.”

Karpenko said social media can contribute to the spread of misinformation and cause people to not believe stories without photographic evidence. She said she has even encountered social media users denying the bombing of Ukrainian civilians.

Sophomore Alyssia Gomez said they had trouble distinguishing true stories about the war from false and came to the event to learn from trustworthy sources.

“I’ve been trying to keep up with the news and reading a bunch of sources, but sometimes it can be hard to tell what’s reliable,” Gomez said. “It can be kind of hard to feel like I have a real grasp of what’s going on.”

Students attended the event for many reasons, including to educate themselves and earn course credit.

“This situation has just made me feel very upset and worried and scared that during the 21st century something like this could occur with everything that we’ve put in place to prevent it from happening,” Niefer said. “I feel confused and angry.”

Karpenko became emotional discussing the war. She said she thinks of her family every day and she is sorry she cannot do more for them.

“I was on the phone with my Dad yesterday, just asking him generic questions, you know how are you, how are kids doing,” Karpenko said. “He told me that they miss me very much and they constantly keep asking him when are they going to see me. ‘Soon,’ I said, and my Dad added ‘Right after our victory.’”