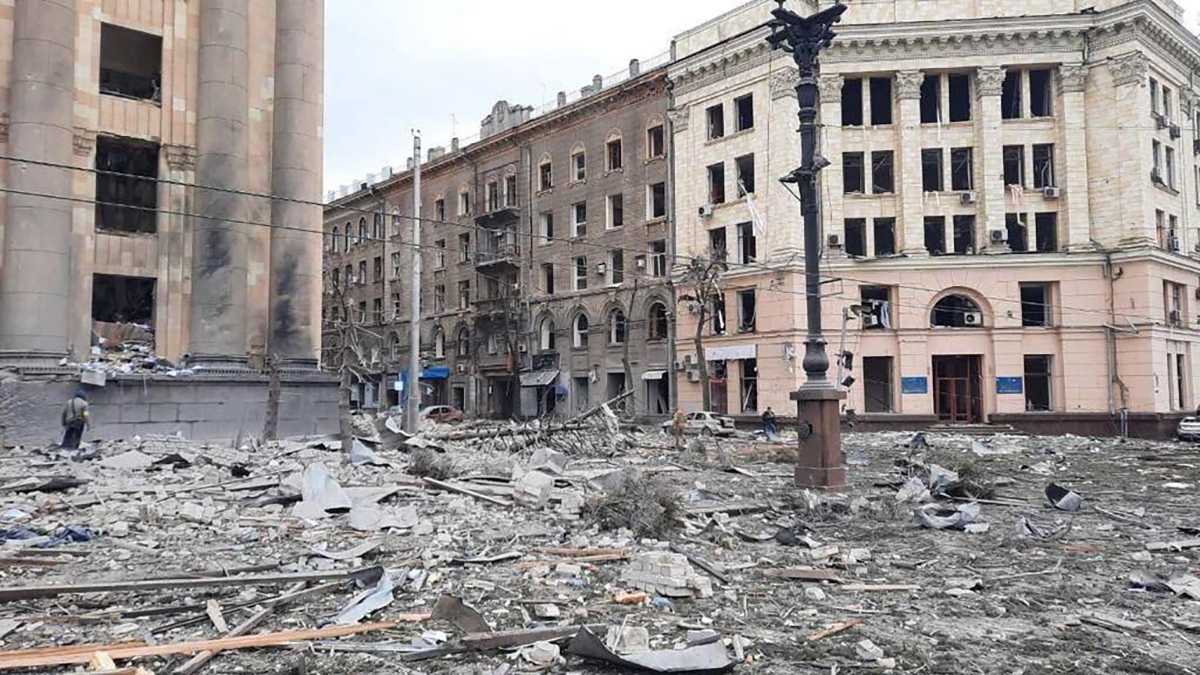 Courtesy of Vitaliy Evsukov
Kyiv, the capital city of Ukraine and the sixth-largest city in Europe, has been heavily bombed since the Russian invasion of Ukraine.
By Elijah de Castro — News Editor
Published: March 3, 2022

Over 4,500 miles away from Ithaca College, the Russian military is waging a war on Ithaca College senior Yuliia Shcherbak’s hometown of Kyiv, Ukraine. While Shcherbak is safe in New York, her family and friends are hiding in bomb shelters or defending their country as it gets attacked by land, sea and air.

On the morning of Feb. 24, Russia launched a full-scale invasion of Ukraine, beginning the first major European war in decades. Kyiv, the capital of Ukraine and Europe’s sixth largest city, has been at the center of the Russian offensive. The invasion is an enormous escalation of the Russo-Ukrainian War, which began in 2014 after Russia annexed and invaded Crimea, a Ukrainian peninsula in the Black Sea.

Shcherbak’s mother and childhood friends are currently in Kyiv. Shcherbak said that on the first night of the invasion, she called one of her friends from Ukraine who stayed in Kyiv during the invasion. Her friend lives in the building next to Shcherbak’s home.

“I remember that night I texted her,” Shcherbak said. “I said ‘Where are you? What are you doing? How are you?’ and she said, ‘They are bombing. We are in the bathroom. We don’t know what to do.’ I called her during this time … I remember in that moment they were not crying or anything. They were just very cold-minded and trying to survive.”

The Russian invasion has created a humanitarian crisis as Ukrainians are facing famine, harsh winter weather, increased COVID-19 risk and economic destruction. Shcherbak said through tears that those who stayed — especially in Kyiv — have tried their best to tend to those in need while the Russian military continues closing in.

“My friends who stayed in Kyiv are buying food for the soldiers, for the injured, for children,” Shcherbak said. “Some of them are even dying of hunger, just because there is no way to go to the shops. People are not allowed to go outside because the Russians are bombing really heavily. People left their homes and so many people who I know left Ukraine already. ”

“I know that I join many members of our Ithaca College community in being both appalled by the Russian invasion of Ukraine and deeply saddened by this unnecessary violence and destruction,” Cornish said. “I also know that I join many members of this community in keeping the Ukrainian people in my thoughts as they confront realities that most of us can only imagine. I pray for a humane resolution to this conflict.”

Since the invasion, 830,000 Ukrainians have fled into neighboring countries like Poland, Hungary, Slovakia, Romania and Moldova. The United Nations announced that as the war proceeds, an estimated 5 million Ukrainians could be displaced. In a March 1 press release, the Tompkins County Legislature denounced the invasion and offered support to Ukrainians fleeing the war.

“The Tompkins County Legislature stands with the people of Ukraine,” the press release said. “In Tompkins County we have a proud tradition of inviting, welcoming and including immigrants and refugees, and will continue to do so for Ukrainians as we stand with our Ukrainian brothers and sisters at this most difficult time.”

Shcherbak said she has been in daily contact with many of the people she knows from Ukraine, including people that she has previously had personal arguments with.

“We’re all united, we really support each other, even people who I haven’t talked to in a while,” Shcherbak said. “Now, I talk to them every day, a couple of times to just check–in on them. I can’t even imagine — to run to those [bomb] shelters while sirens are notifying [them] about airstrikes. This is crazy.”

“I’ve got to say it’s wonderful to see an aggressive war where the United States media is telling the truth,” Cohen said. “The ultimate victims of modern warfare is always the civilians. I want to be clear — I’m thrilled that the victims of this war are getting the coverage that they deserve. But this is a new thing, this is a different thing. The invasion of Iraq in 2003, that was celebrated by the American media.”

Zenon Wasyliw, professor in the Department of History, said that as a result of Ukraine’s bloody history, survival has become part of the country’s identity. In addition to 19th century conflicts under the Russian Empire, the Soviet Union committed genocide on Ukrainians in the early 1930s, killing 3.9 million ethnic Ukrainians in the Holodomor, a man-made famine. Ukraine was also one of the earliest locations of the Holocaust, where 1.5 million Jewish Ukrainians were killed. On March 1, the Russian Air Force bombed the Babyn Yar Holocaust Memorial Center in Kyiv, which remembers the mass execution of 33,771 Jewish Kyivians that occured in a two-day period in September 1941.

“We often forget about the countries between Russia and Germany — Ukraine, Belarus, Poland,” Wasyliw said. “This is where a good part of the Holocaust took place, where the Nazis implemented genocide. Many in the Soviet Red Army who were killed or were taken prisoner [by the Nazis] were of Ukrainian background. So there is a legacy of survival in Ukraine.” 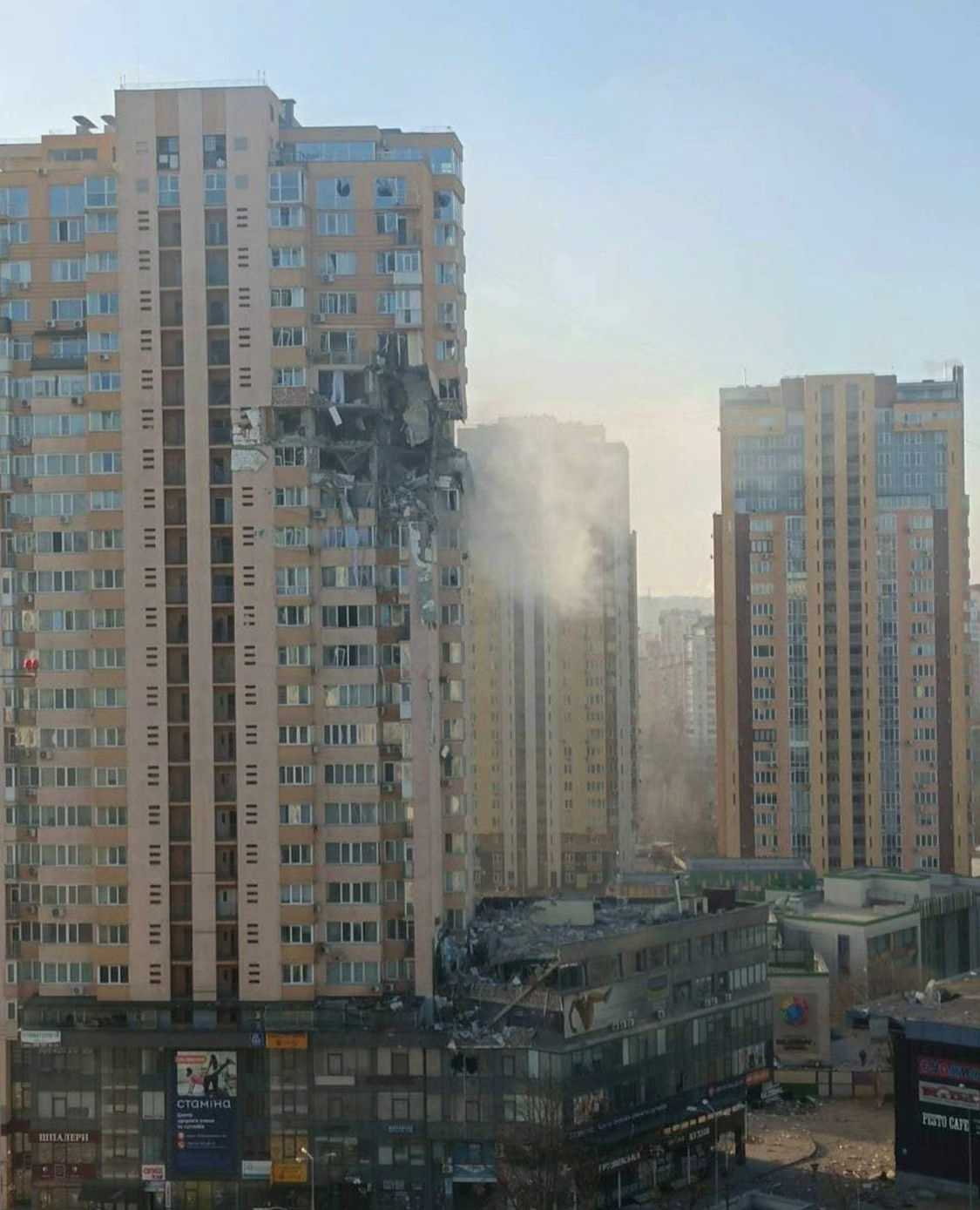 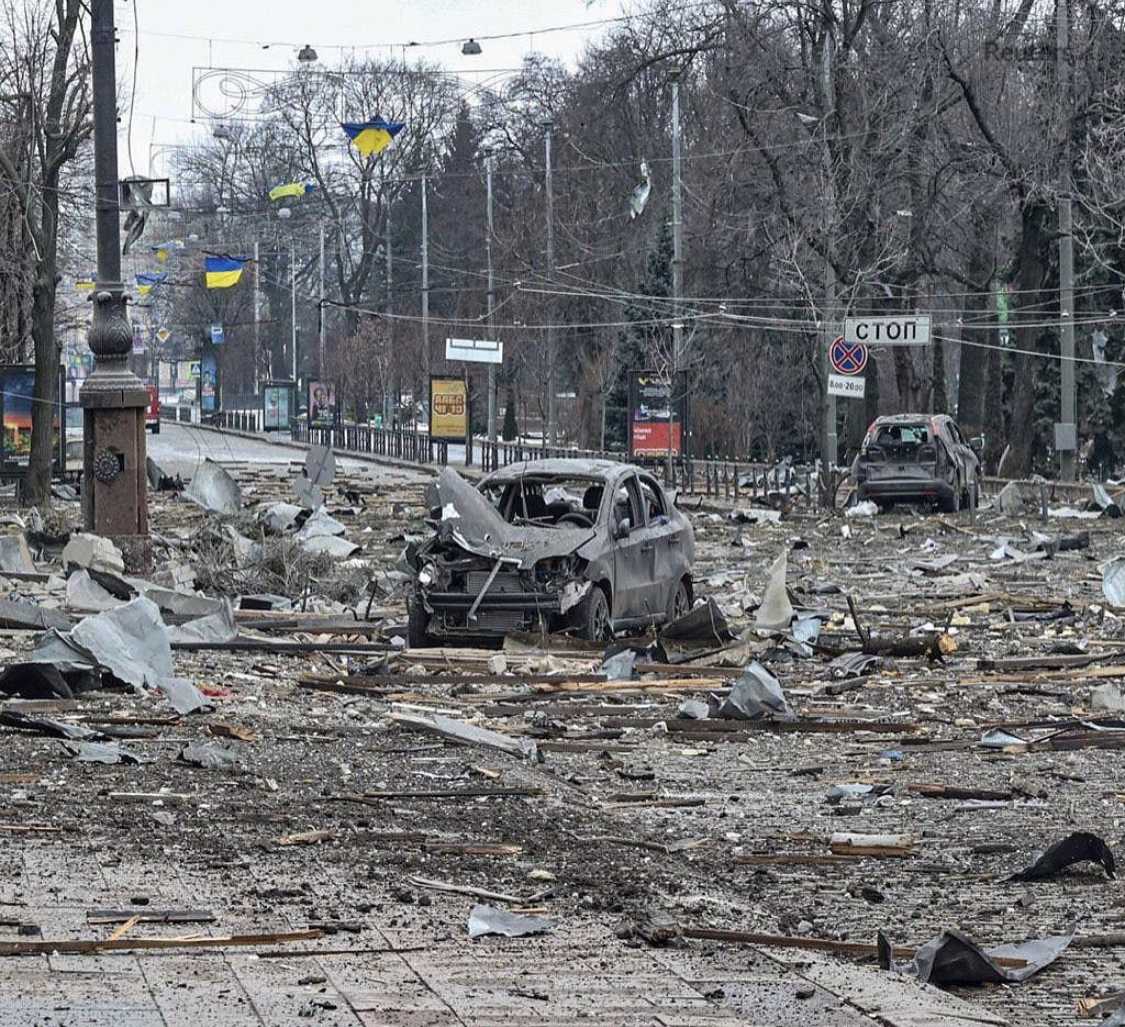 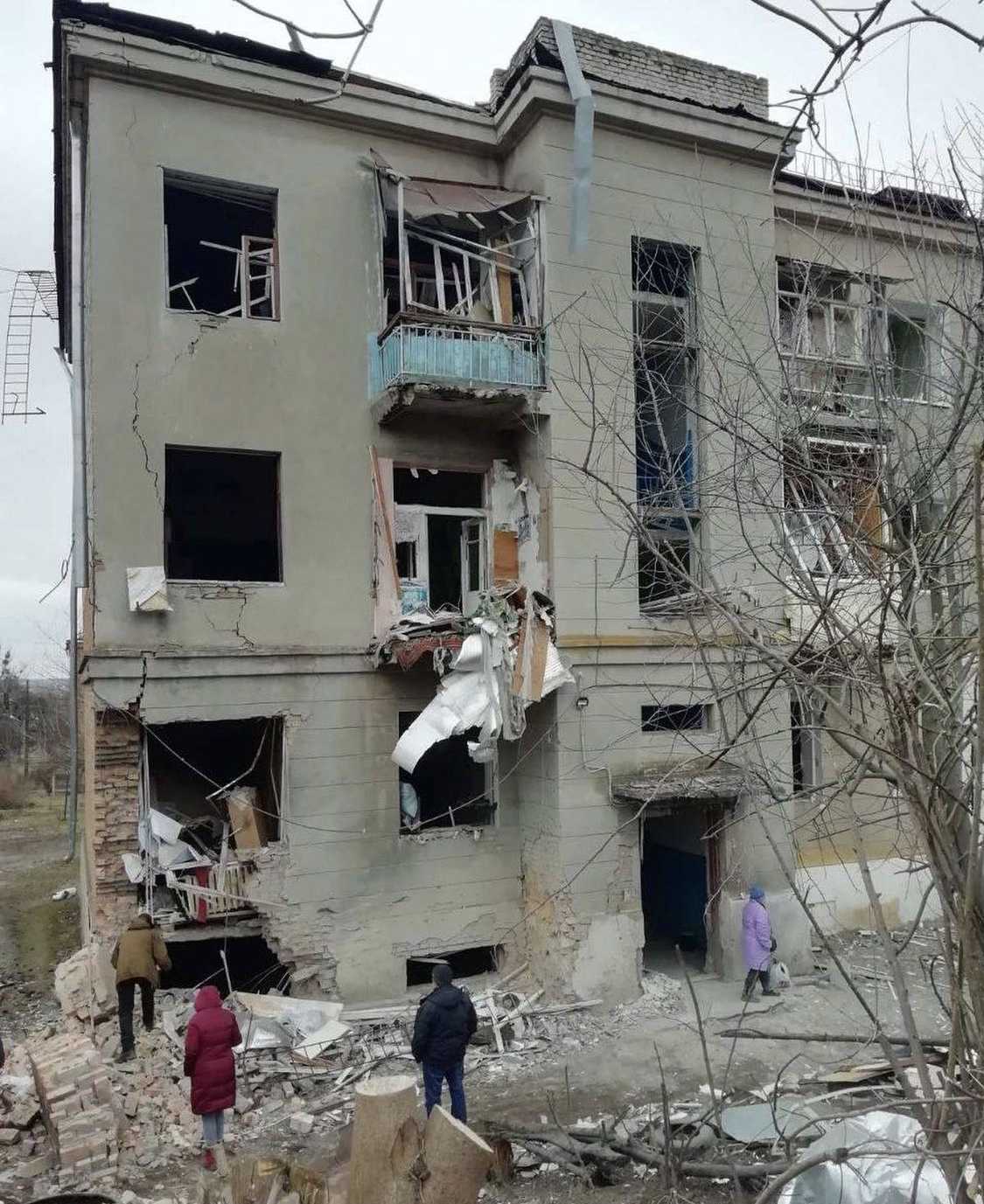 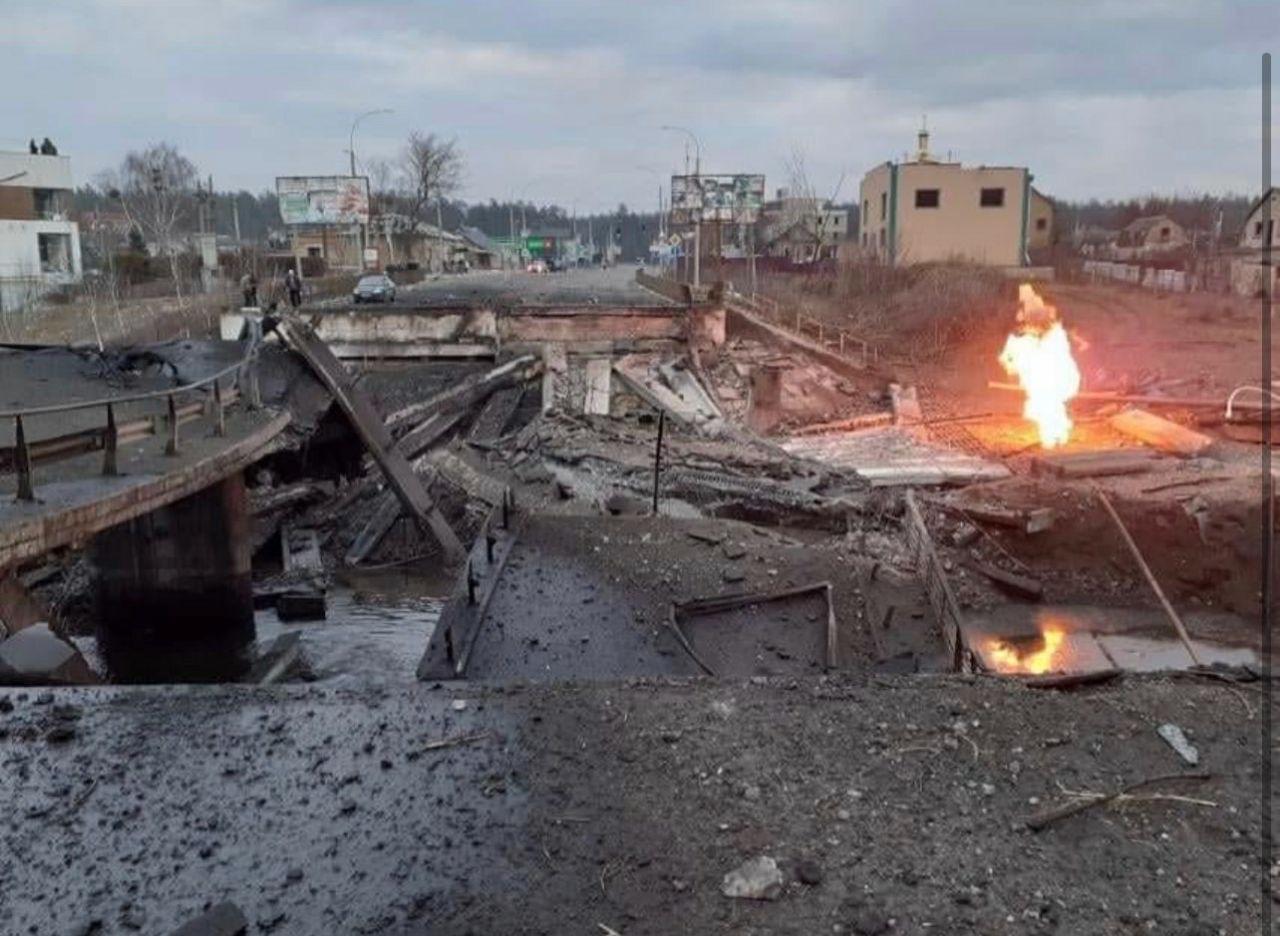 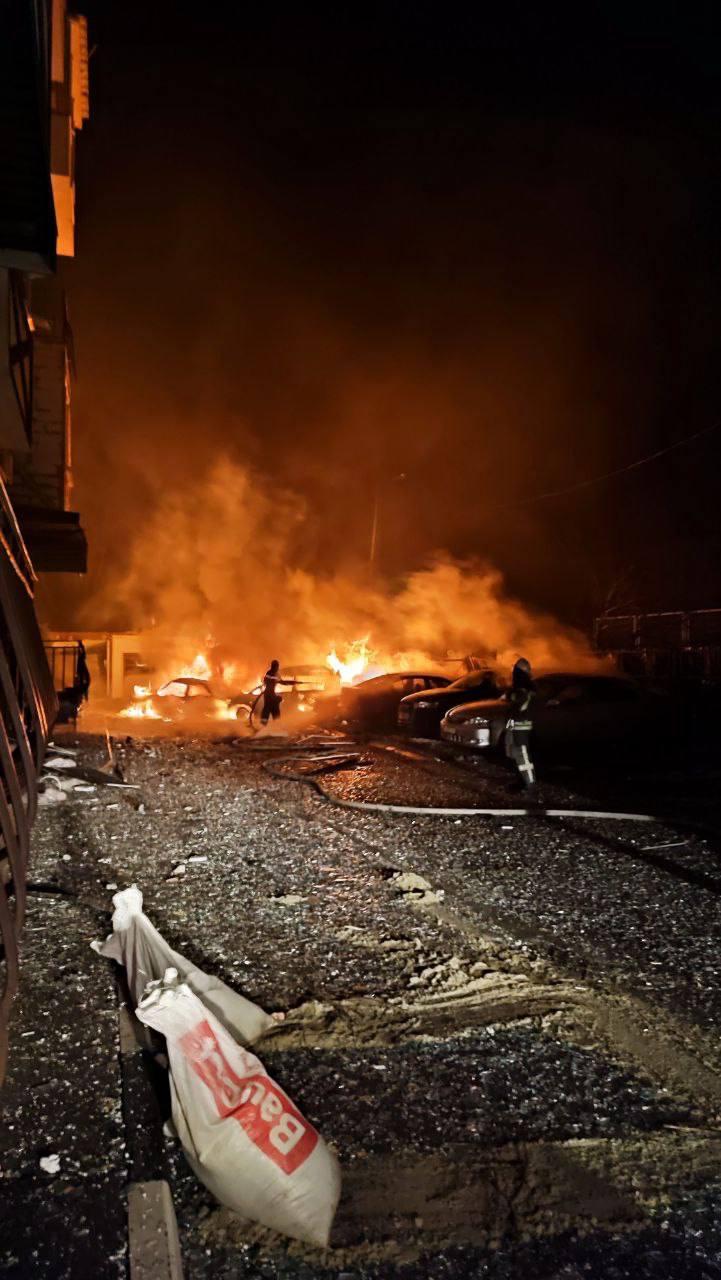 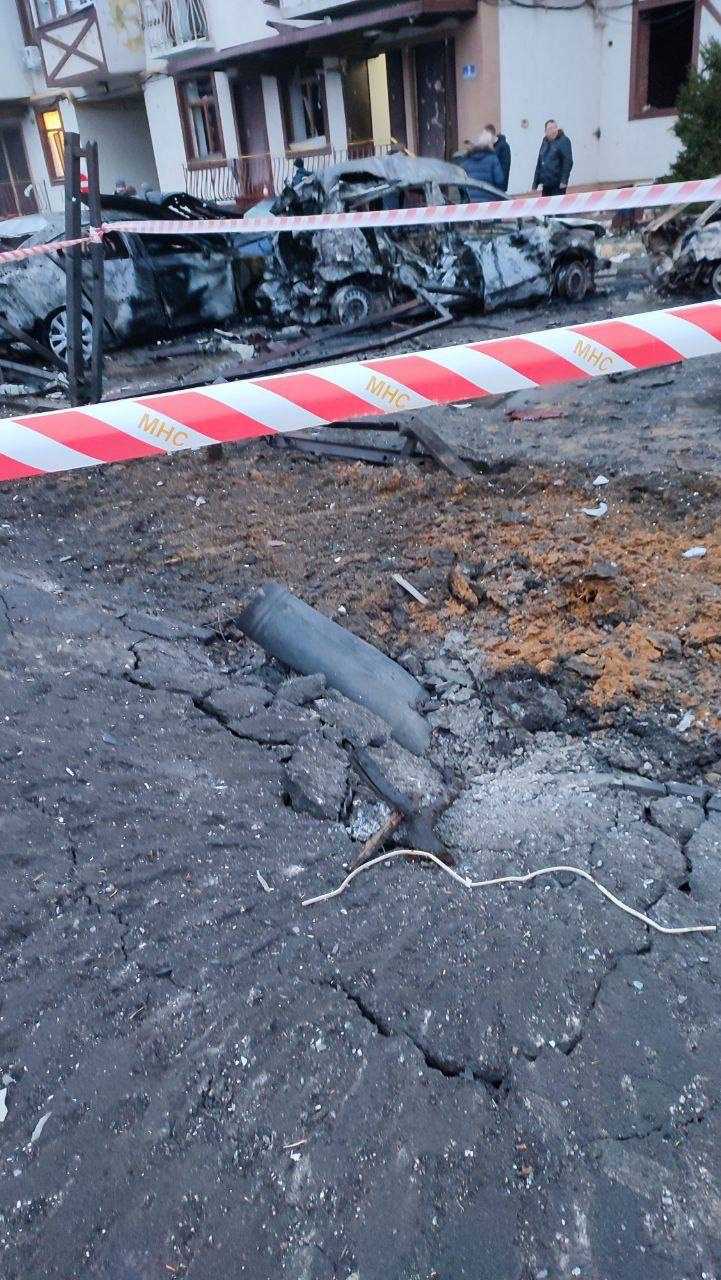 Since the beginning of the invasion, the Ukrainian army has put up a fierce resistance to the Russian military, holding ground in key cities like Kyiv and Kharkiv. Shcherbak credits Ukrainian President Volodymyr Zelenskyy’s leadership for inspiring the Ukrainian people to fight to defend the country’s democracy and 30 years of independence.

“We see that he is there with his people and he is the voice of the nation,” Shcherbak said. “At this moment he is so inspiring. … I’m very happy that he is our president. We are feeling very proud. We will not feel shame for saying we’re from Ukraine. We will say this was pride because we know that the whole world knows that this little country in Europe is fighting [Russia] for the whole world.”

As the war has proceeded, Western powers like the European Union, the United States and Canada as well as countries in Asia have implemented sanctions against Russia, in hopes of waging a nonviolent war on the Russian economy. Both the United States and the European Union have taken actions to cut Russian President Vladimir Putin and other Russian oligarchs off from the global banking system. However, the war caused a record surge in the price of oil and natural gas, one of Russia’s largest exports.

Stephan Wasylko is a Ukrainian American from Binghamton, New York, who served as the Senior Commercial Officer in the U.S. Department of Commerce from 1977–2010. During the fall of the Soviet Union, Wasylko was the Senior Commercial Officer in Ukraine from 1992–95 and held that same position in Russia from 2000–03, during Putin’s leadership. Wasylko said that during his time in Russia, he witnessed the democratic backsliding of Russia. Wasylko believes that Putin’s invasion of Ukraine is a part of larger territorial ambitions.

“I think the whole world knows this has been an unprovoked attack, an invasion of Ukraine,” Wasylko said. “Ukraine and Russia have had a storied history for 300 plus years … From 2000 to 2003 was just when Putin came to office … When I was there, whatever little democracy existed in Russia, he immediately started to undermine that.”

Wasylko said the ongoing sanctions by Western powers are effective methods of punishing Russia economically. Wasylko noted that as a result of the recent sanctions, the Russian ruble is now worth less than one cent, in comparison to the US dollar. Before the invasion, one Russian ruble was worth 1.3 cents.

“The sanctions are very, very important, because they will cripple the Russian economy,” Wasylko said. “While the sanctions are coming late and they’re not as complete as they could be, this is really the only means that we have to help Ukraine and fight Putin. The more painful they become, the more pressure he will have domestically.”

Shcherbak’s boyfriend, who grew up in Donetsk in eastern Ukraine during the Russo-Ukrainian war, helped Shcherbak organize a list of fundraisers that members of the college community can donate to. The funds support humanitarian aid like medical equipment for Ukrainian hospitals, psychological services and support for children fleeing the war.

In her statement, Cornish encouraged the campus community to attend a special session on the war in Ukraine at 12:10 p.m. March 3 in Williams Hall 323 and on Zoom. The event will be hosted by the Department of History and will feature Wasyliw, Shcherbak and junior Daria Karpenko — another Ukrainian student at the college — as guest speakers.

Shcherbak encouraged members of the college community to refrain from using euphemisms when discussing the war.

“Stop calling it ‘Ukrainian crisis,’” Shcherbak said. “It’s the Ukrainian War. I was in class and my professor said ‘Ukrainian crisis.’ This is not a crisis, that is such a gentle word for this. People need to understand that this is important to us. This really, really hurts.”

Shcherbak said it has been extremely difficult for her and her boyfriend to go about their days and attend classes while their families and friends are under attack, as she feels there is not enough she can do to help.

“If somebody wants to know more, they can reach out to us,” Shcherbak said. “This is not a joke. This is what’s happening in our lives right now. We truly believe this is worth your attention. If everybody at Ithaca College donated $3 that they would spend on buying a coffee, this would help us buy so much humanitarian aid for those soldiers and for my family who are serving. … We’re very, very, very concerned about them.”