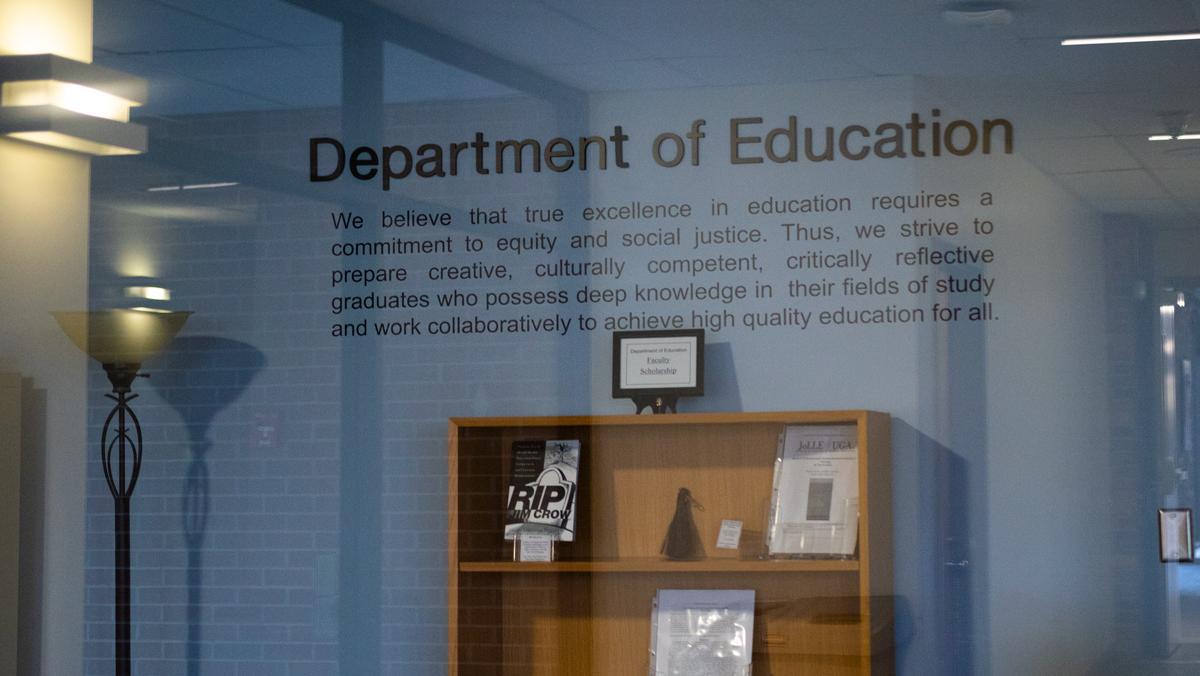 Ash Bailot/The Ithacan
Under the approved changes, students seeking a teaching career in one of the discontinued education majors will major in their respective content area at the undergraduate level and minor in education studies
By Chris Tolve — Contributing Writer
Published: March 11, 2021

Thirteen undergraduate teacher education majors at Ithaca College will be discontinued within the next three academic years, though most will be substituted with equivalent graduate programs.

The changes will take place as part of the final recommendations of the Academic Program Prioritization Implementation Committee (APPIC), which were approved Feb. 24 by President Shirley M. Collado and La Jerne Cornish, provost and senior vice president for academic affairs.

All of the undergraduate teacher education majors in the School of Humanities and Sciences (H&S) and the three majors in the School of Health Sciences and Human Performance (HSHP) will be cut. In H&S, the list includes K–12 art, 7–12 physics, 7–12 biology, 7–12 chemistry, 7–12 German, 7–12 French, 7–12 Spanish, 7–12 English, 7–12 social studies and 7–12 mathematics. The education studies minor and the undergraduate music education major will be retained.

Junior English education major Hailee Agosti, who plans to attend a graduate program at another college, said she believes that cutting the education majors will be a loss for the college.

“When I heard they were cutting most of the education majors, it was disappointing,” she said. “It is a really great program. I think they are still expecting a lot of people to do the education minor because it is a big minor on campus, but there are a lot of differences between the major and the minor, and you just don’t get the same hands-on experience if you only do the minor.

Although most undergraduate teacher education programs are being discontinued, almost all of them will be substituted with equivalent graduate programs. Sara Levy, associate professor and chair of the Department of Education, said the cuts are not as bad as they appear.

“It looks really bad, but in terms of the day-to-day functioning of our department, not a lot really changes,” she said. “We have robust graduate programs already that certify students in almost all of the same areas. … The cuts in undergraduate programs come with a recommendation and commitment to shift toward having the graduate programs really do teacher preparation.”

Under the approved changes, students seeking a teaching career in one of the discontinued areas will major in that content area at the undergraduate level and minor in education studies, then earn their teacher certification at the graduate level in a 4+1 program, which allows them to earn both a bachelor’s and a master’s degree in five years instead of the usual six, Levy said. Most students choose to follow this track because the undergraduate education majors are credit–intensive for a four-year program, Levy said, so the cuts will streamline a degree pathway that already exists. Some education majors can add up to over 100 credits.

“Right now, we often have students who come in as first-year students, look at those undergraduate teaching majors and say, ‘This is huge,’ then switch to the area content major and pursue the masters program,” she said. “So it is formalizing an informal structure and making that clear and well-marketed.”

There are two undergraduate education majors for which no equivalent graduate programs exist, however. Masters programs in K–12 art education and 7–12 German education will need to be created if future students wish to pursue teaching careers in those areas. Levy said the department is exploring that possibility.

Junior Brynn Smith said she feels that cutting education majors does not reflect the college’s values of diversity, equity and inclusion.

“Many education classes focus on social justice and equity issues in the education system, and people genuinely become more aware of the world around them and their own privilege or identity through these classes,” Smith said. “To have the college be eliminating majors and faculty, it seems like they’re sending mixed messages about what the administration cares about student learning.”

Levy said the cuts will allow students greater flexibility during their undergraduate years.

“You can get your English major, history major, math major, biology major, etcetera, and you can study abroad, take electives or play a sport, so it opens up that undergraduate experience and puts the teacher preparation piece in the fifth year in a focused cohort model that already exists and is successful,” she said.

Aaron Weinberg, professor of mathematics who teaches classes in the Department of Education, said most undergraduate classes will no longer be mixed with graduate students, making teaching easier.

“There are slightly different requirements for the graduate students,” he said. “It gets tricky trying to essentially teach two classes in one. In that way it also streamlines things pedagogically.”

Some faculty members who have been notified that their positions were recommended for termination have added their names to a list that is circulating on social media, including Christine Havens-Hafer, assistant professor in the Department of Education, and Marcy Sutherland, instructor in the Department of Education. Levy said the department is working on a solution to make sure the decrease in faculty will not place a heavier burden on the remaining professors.

Weinberg said the department could lose enrollment if the graduate programs are not sufficiently marketed to prospective students.

“If our teaching program does not get marketed, if students who are applying to Ithaca College do not know there is a teaching program and if there is not a clear pathway for students to move through the five-year program from day one, then I think we will lose some students,” he said. “That is why I think it is imperative that if the college cuts these programs, then it needs to support and advertise the masters program.”

Smith said she believes the quality of education will not be affected by the restructuring but worries that the college will be less competitive than other education programs.

“Personally, I would never choose a program that forces me into another year of school when I could go to a large variety of programs where I’ll get certified to teach in four years,” Smith said. “Also, knowing the school’s financial situation, I can’t help but feel like there’s a bit of a money grabbing aspect to the decision since it will encourage students to spend another year’s worth of tuition at Ithaca just so they can be certified to teach in the classroom.”

Levy said she thinks the master of arts in teaching (MAT) program’s reputation will ensure that student enrollment remains high after the cuts. In Spring 2021, 25 graduate students were enrolled in the MAT programs and childhood education master of science program, according to the Office of Analytics and Institutional Research.

Smith said she thinks eliminating education majors will eliminate the sense of community among education students.

“It’s been really sad and a little emotionally draining to realize that if I was a high schooler looking at colleges, I would not even apply to Ithaca based on the way they’re restructuring the program,” she said. “I would have dismissed it completely and looked at other schools. It makes me concerned about the future of the department and the faculty I love.”