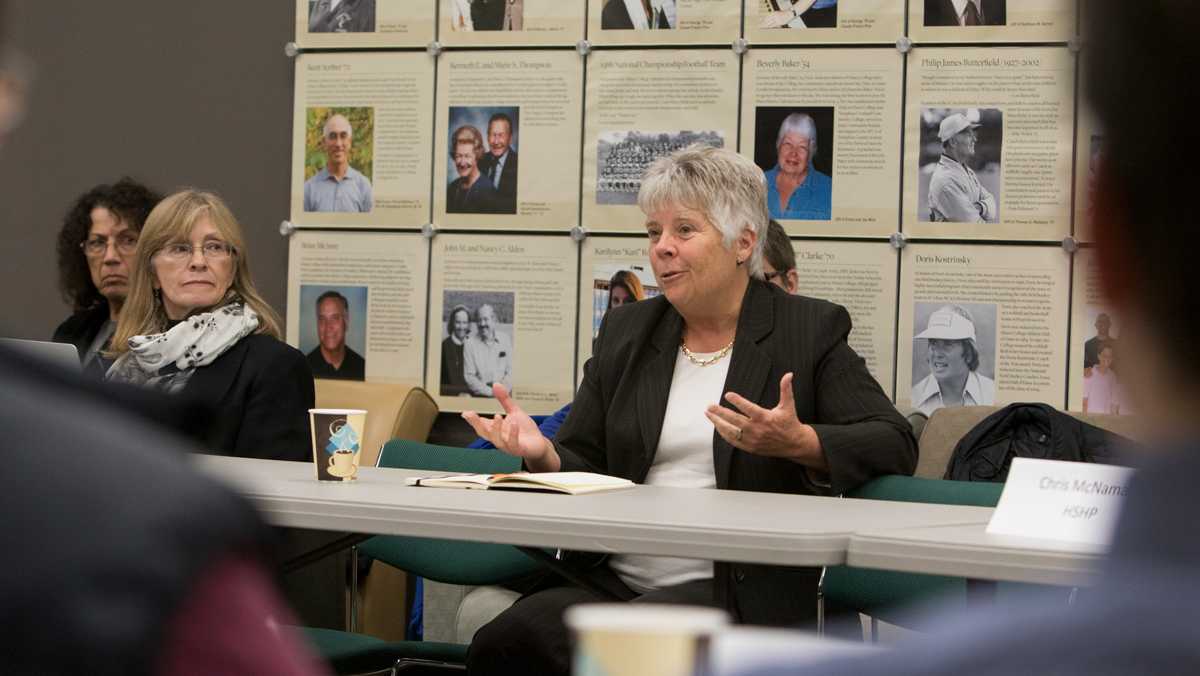 The council also discussed the debate surrounding this year’s Commencement, discussed the implications of the New York State Paid Family Leave (PFL) law and voted not to designate a specific position on the Faculty Benefits Committee for a part-time faculty member. The council also voted to extend the lifetime of the ICC Advisory Committee to the end of this academic year.

Pringle said the way the student protest occurred during gun-advocate Larry Pratt’s visit to campus Nov. 9 served as a model for the kind of respectful discourse that President Shirley M. Collado encourages. Pringle commended both junior Anna Gardener, a primary organizer of the gun control protest and teach-in, and the student groups who hosted the speaker, IC Republicans and Young Americans for Liberty.

Pringle also said the administration met with the student groups who hosted the speaker prior to Pratt visiting campus and said she believes the entire experience served as a learning opportunity for them.

“They had not done their homework necessarily on who the speaker was until we sat with them and said, ‘Are you aware of whom and what the speaker is about?’ and it was a very interesting learning moment, I think, for those students as well,” Pringle said.

Senior Caleb Slater, president of IC Republicans, said in an interview with The Ithacan that his organization had extensive discussions about bringing Pratt to campus before endorsing him as a speaker. He said the group was aware of his controversial background, but that it was still worth having him come to campus to discuss ideas they agreed and disagreed with him on.

Pringle said Tom Swensen, Faculty Council chairman and professor and chair in the Department of Exercise and Sport Sciences, is working with Collado on creating a work group consisting of different constituencies and the senior leadership team to have conversations about a free speech policy at the college.

“It is a very important point of hers,” Pringle said. “I think people that have heard her speak publicly know that she really wants our community here at Ithaca to become a model nationally about how we will have conversations when there are differences in opinion and topics that, in some cases, are very controversial and raise energy levels within certain populations.”

Pringle said the college is considering specific policies regarding how student groups use campus facilities for speakers and the time within which student groups must notify the college about speakers they want to host. She said all of these policies will be subject to discussion with the Staff Council, the Faculty Council and the Student Governance Council.

Paula Ioanide, council member and associate professor at the Center for the Study of Race, Culture and Ethnicity, said that there is a fine line between allowing speakers with politically extreme viewpoints to speak on campus and allowing white supremacist groups to create a campus environment that is isolating to students of color. She said these groups attack liberal campuses under the guise of free speech.

“There are other instances where the views are basically hate speech and have a hugely detrimental effect on our students of color, not just in the moment that it happens, but in the kind of hostility that it breeds and the kind of campus culture that is enabled by the presence of these visitors,” Ioanide said.

The council also discussed the debate surrounding the structure of the 2018 Commencement ceremony. A group of parents created a Change.org petition to alter the structure of the Commencement ceremony to allow students to walk and have their names read, as previously reported by The Ithacan. The petition has been signed by both parents and students.

David Prunty, executive director of auxiliary services and co-chair of the Commencement Committee, presented to receive faculty input on the issue. He said Collado, prior to the Change.org petition, tasked the committee to find options for Commencement that would allow students to walk and have their names read.

The council discussed multiple options including splitting up Commencement by school and department and calling students’ names without walking. Prunty said the college is currently consulting different companies that plan college commencements to figure out how to have students walk without significantly lengthening the time of the ceremony.

“It’s pretty apparent that people have strong opinions, which is natural and fine,” Prunty said.

The committee held an open discussion Nov. 15 about the 2018 Commencement ceremony and created a survey that was sent out to students, faculty, staff, alumni, parents of alumni and current students to give people a chance to further express their opinions.

Rachel Fomalhaut, chair of the Contingent Faculty Union and lecturer in the Department of Writing, also presented at the meeting, discussing the PFL law, a New York State law that will take effect Jan. 1, 2018.

The law guarantees paid family leave to most private-sector employees except educators, which the college is exempt from covering under the law, as previously reported by The Ithacan. The council plans to invite Brian Dickens, vice president of Human Resources, to speak at the next meeting about cost estimates if the college were to provide benefits covered under the Paid Family Leave law for faculty.

Swensen said that Dickens told him that the college is going to have its own alternative program for Paid Family Leave that will be applicable to all faculty and staff at the college. Swensen also said that Dickens said the college’s program will be college-funded as opposed to being employee funded, which is what the state PFL law proposes.

Dave Maley, senior associate director of media relations, said via email to The Ithacan, that the college is in the process of drafting a Paid Family Leave policy separate from the state law. Maley also said the college is currently working with tri-council leadership to finalize the program.

“The college’s offering will be thoughtful, intentional, and family-friendly in creating parity among faculty and staff paid leave provisions,” he said.

The council also extended the lifetime of the ICC Advisory Committee so that it can function until the end of the 2017–18 academic year. The expiration date for the task force was Nov. 14, until the council extended its lifetime. The committee plans to establish new committees that focus specifically ICC policy and curriculum. Jason Freitag, associate professor in the Department of History, said creating a committee about policy would allow more faculty to weigh in on the ICC.