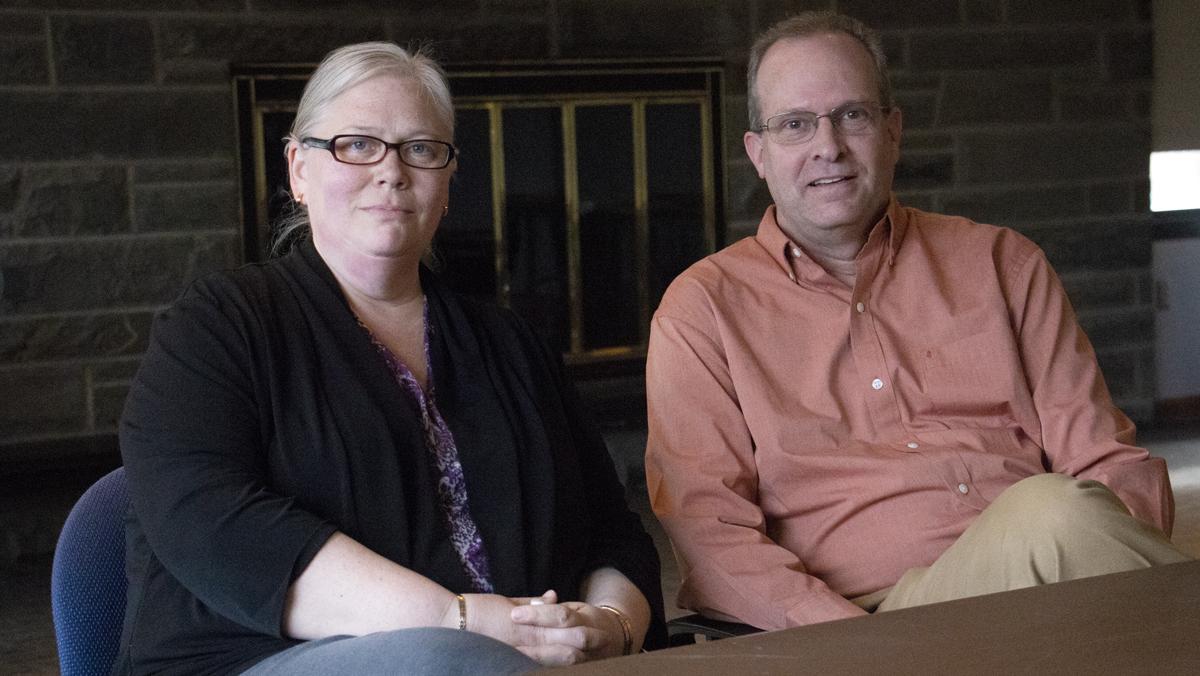 Julia Cherruault/The Ithacan
From left Amy Jessen-Marshall, vice president in the Office of Integrative Liberal Learning and the Global Commons at the Association of American Colleges, and Universities and David Hubert, associate provost for learning advancement at Salt Lake Community College. The two served as external evaluators of the ICC.
By Ryan King — Assistant News Editor
Published: February 12, 2019

Despite the student body’s frequent criticisms of the Integrative Core Curriculum, no students showed up to the two open sessions with external evaluators when they came to Ithaca College on Feb. 6–7.

The ICC Program Review Committee contracted David Hubert, associate provost for learning advancement at Salt Lake Community College (SLCC), and Amy Jessen-Marshall, vice president in the Office of Integrative Liberal Learning and the Global Commons at the Association of American Colleges and Universities, as external evaluators to get outsiders’ perspectives on the program and how it can be improved.

The evaluators met with various constituencies during their time on campus and will give feedback to the committee before it releases its next report. The committee will then take that feedback and release an updated version of the draft ICC review, which they released at the beginning of the semester, March 18. The updated report will include the evaluators’ recommendations.

Susan Witherup, professor in the Department of Biology and co-chair of the ICC Review Committee, said the evaluators were independently contracted and would not comment on how much they are being paid because the committee is not releasing information about compensation publicly.

The ICC is the college’s general education program. It currently has six themes that students can choose courses from and requires students to fulfill requirements in diversity, quantitative literacy, writing, liberal arts and more. It also involves an e-portfolio system that students are required to complete for graduation.

Hubert and Jessen-Marshall agreed that they did not want to publicly disclose specific recommendations before the ICC report is finalized. The evaluators said their broad concerns with the program involved some of the logistics behind the ICC themes, the e-portfolio and making the program easy for students to navigate.

“I think the biggest choke-point is the themes,” Hubert said. “There’s lots of different possibilities on how to handle that going forward.”

Jessen-Marshall, who has done approximately six curricular reviews similar to this review in the past three years, said she thought it was normal for students to not show up to open forums on topics like this.

“Often curricular decisions feel really distant from students,” she said. “This isn’t abnormal. It can be hard to get students to engage with reviewers like this.”

She said that the data from the ICC draft report was helpful in gauging students’ views of the program. The draft report concluded that approximately 60 percent of students polled felt the ICC requirements were too difficult for them to understand. Between 70 to 80 percent of the students polled from the past three senior classes said they struggled to complete the program requirements.

Hubert and Jessen-Marshall both agreed that they met with approximately 10 students during their time on campus during closed sessions. The students they spoke to were involved with the Student Governance Council, the President’s Host program in the Office of Admissions, and the ICC Program Review Committee. They also said they met with approximately 50 faculty and administrators during closed sessions.

“I think, based on the faculty and students we’ve talked with, everyone’s really invested in wanting to have this program review to be really helpful and to help improve what’s going on at Ithaca,” Jessen-Marshall said.

Witherup said Hubert and Jessen-Marshall were selected to be the evaluators because of their experience in the development of general education programs.

“The evaluators were chosen by searching and reading about the work of academic professionals who have been involved in general education reform and who had presented their work at academic conferences,” she said.

Both Hubert and Jessen-Marshall have previous experience in reshaping core curriculum at the college level.

Hubert helped reshape the core curriculum at SLCC after the Northwest Commission of Colleges and Universities criticized its program in 2005. Hubert said that when his college was re-accredited ten years later, its reformed program was commended by the accreditation body.

He said one of the key differences between the core curriculums at SLCC and Ithaca College is that the artifacts for the SLCC e-portfolio are required to be completed as part of the coursework for each general education course.

Unlike Ithaca College, completion of the e-portfolio is not required for graduation at SLCC. Hubert said if a student fails to complete an artifact for an individual course, they will typically lose 8 to 10 percent of their final grade for that class because the artifact is part of the course grade.

Hubert said this system allows students to get feedback on their e-portfolio and forces them to complete the portfolio as they do their classes instead of doing it at the last minute.

In cases where students transfer credits, he said that they are not required to submit an artifact to the e-portfolio at SLCC. Ithaca College requires this, even if the transferred credits came from high school.

Prior to working for AACU, Jessen-Marshall helped reshape the core curriculum at Otterbein University. She said the program has an e-portfolio system similar to the one Hubert described at SLCC. She also said they reduced the number of mandatory course requirements to give students more flexibility with their schedules.

She said Otterbein University requires approximately 16 to 18 courses for general education depending on the student’s circumstances. The ICC typically requires nine to 13 courses beyond one’s major based on individual circumstances. She also said they had one theme for the core curriculum when she left.

Hubert said he felt the ICC was ambitious because of its overall structure, but needed some tweaks.

“I think it’s on the upper end of the continuum in terms of ambition,” Hubert said. “I mean, it’s a really exciting program that Ithaca is trying to do. It’s not surprising, frankly, that there are some logistical hiccups because it is so ambitious.”

Commentary: Student input is vital to the ICC Program Review