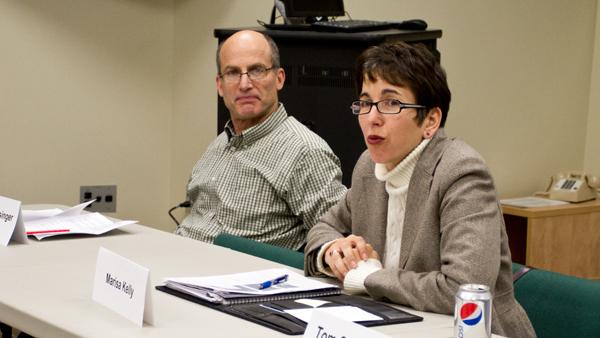 The meeting was scheduled for the Executive Committee of the Faculty Council to report on a meeting held Nov. 9 with President Tom Rochon and Marisa Kelly, provost and vice president for educational affairs, to discuss faculty involvement in administrative decisions.

Shared governance is a concept that encourages collaboration between faculty and administrators to develop ideas and solve problems.

Specifics about the executive committee meeting and the town hall meeting were not released. However, conversations continued later Tuesday night at the Faculty Council meeting.

Faculty Council engaged in a heated debate about salary increase with Kelly, who attended the first 40 minutes of the meeting. The council also expressed concern over the speed of the implementation of the Integrative Core Curriculum.

At their previous meeting, Faculty Council submitted a recommendation to the administration for the college budget committee, asking for a 3-percent increment in general merit pay. Don Lifton, professor of business and former Faculty Council budget representative, said it was historic to bring forward one recommendation instead of the list of priorities they submit to the administration every year.

Kelly said she does advocate for faculty at college budget committee meetings, but that for the budget committee as a whole, the salary pool is one priority among many, including college affordability for a broad range of students.

“Absolutely what comes forward from Faculty Council or any other faculty group is a critical part of what we take into consideration there, but it cannot be the only thing,” she said.

Also at the meeting, in response to faculty concerns about the rapid pace at which the college is implementing the ICC, Kelly said it would be ideal not to hurry the process, but the timeline is largely dictated by the need to provide assessment data for the Middle States accreditation review.

Middle States last reaffirmed the college’s accreditation in June 2008, but the college was assigned a monitoring report, due in April 2010, to address its lack of an assessment program for student learning and a general education system. The college has a periodic review report due in June 2013.

To encourage communication between faculty and administration, the council passed a motion suggesting each academic school invite Rochon to school meetings at least once a year, and preferably once each semester. Warren Schlesinger, associate professor and chair of accounting, proposed the motion.

Schlesinger said colleagues approached him after the town hall meeting earlier that day asking about faculty school meetings with the president that used to happen in previous years.

“That is an opportunity to talk to the president face-to-face in those meetings, rather than just that large meeting in the start of the year — that would be very helpful to get those concerns out there,” Schlesinger said.

In the final part of the meeting, Huron Consulting Group representatives Bob Woodruff, project director, and Lauren Halloran, project manager, gave a presentation about their progress in assessing college efficiency as phase two of their review is under way.

Peter Rothbart, professor of music and chair of Faculty Council, asked Huron representatives whether programs that are still evolving because of IC 20/20, like the student advising center, will be reviewed.

“That is not something that we’ve been asked to get involved with,” Woodruff said.

Rothbart said another town hall meeting will be scheduled this semester, as well as other meetings with Rochon and Kelly.