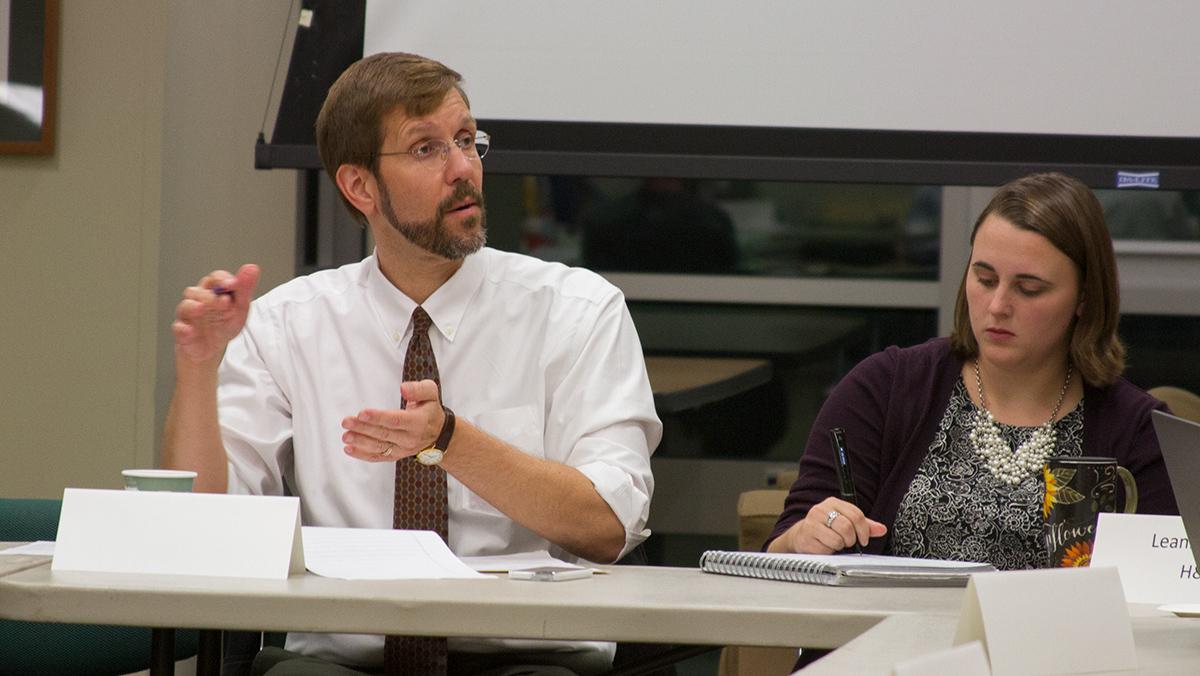 With the release of enrollment data and midterms approaching, the Ithaca College Faculty Council discussed student-centered issues of retention rates, the release of final grades and the Integrative Core Curriculum at its Oct. 4 meeting.

Bryan Roberts, associate dean of the Roy. H. Park School of Communications, addressed the council and introduced a preliminary plan to improve student retention at the college. Roberts also proposed that final grades should roll out from the Office of the Registrar sooner. The council concluded its meeting with a discussion on how best to establish a channel of faculty input on the ICC.

Roberts spoke on behalf of the Student Success Committee, created last year by the Faculty Executive Council to address issues of recruitment and retention at the college.

He said comparable institutions have retention rates of 90 percent or more, whereas the college retains about 84.5 percent of its students.

The Student Success Committee aims to bring this number up to 90 percent in the next five years. Roberts said he hopes to achieve this by expanding the college’s mental-health resources, improving communication between schools on campus and improving the academic rigor of the programs the college offers.

“These are not poor-performing students,” Roberts said. “Half our students who left last semester had over a 3.0 GPA. Half of those students had over a 3.5. We want to keep these students.”

He said this 5 percent increase could retain millions of dollars in revenue for the college.

Roberts went on to propose that students be able to view their final grades on a rolling basis beginning Dec. 15, as faculty submit them, rather than wait until Dec. 30, when the Registrar currently releases them. This is not an official proposal, and it would have no effect on current faculty protocol for releasing grades. Faculty members at the meeting expressed their support for his proposal.

The Faculty Council also moved to form an ICC Advisory Committee, which would be charged with addressing issues students and faculty have with the structure and implementation of the ICC.

Jason Freitag, associate professor in the Department of History, led the discussion on how to go about establishing a “faculty feedback loop” for the ICC.

“The purpose would be to improve the ICC — to consult, assess and better the program,” Freitag said.

Correction: The article previously stated that Bryan Roberts proposed that faculty should roll out final grades sooner. He actually proposed that the Office of the Registrar post final grades on a rolling basis, beginning Dec. 15, when faculty begin to submit them.

This month, the council received an update on the Academic Workflow Implementation Group project and discussed moving the date for submitting final grades.

The deadline for faculty to turn in final grades has been moved from Dec. 24 to Dec. 30.

Grade deadlines for faculty pushed back to the end of December