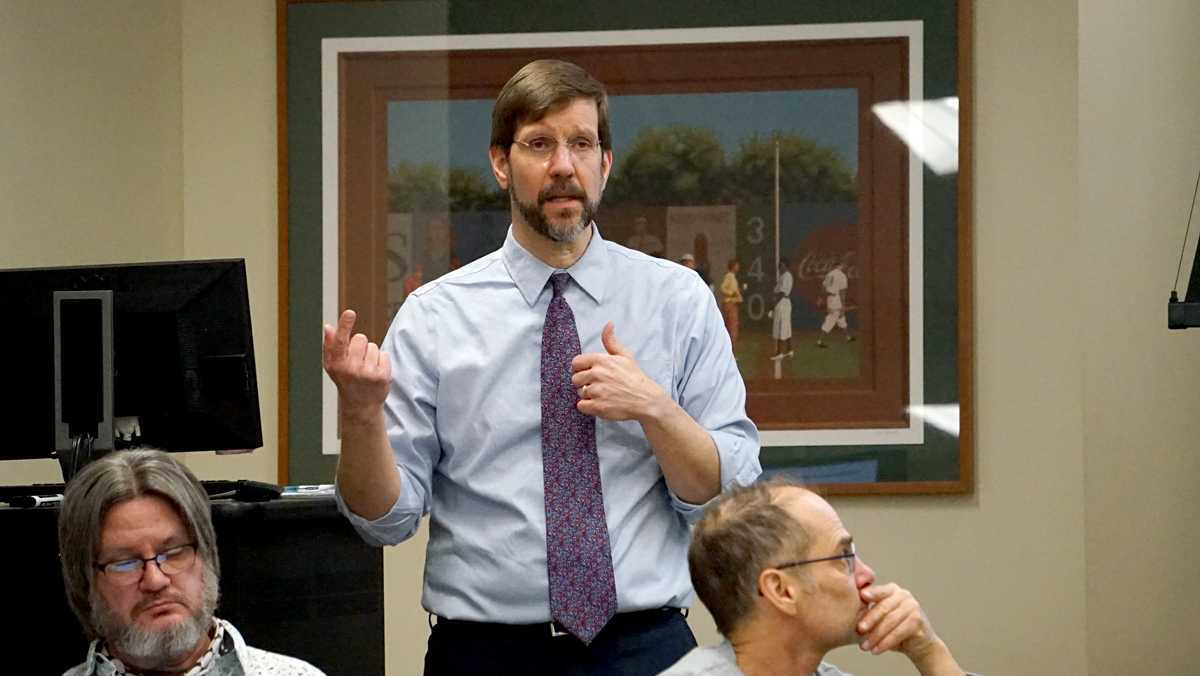 Sabrina Chang/The Ithacan
Jason Freitag, presidential fellow and professor in the Department of History, presents new language developed by the Strategic Planning Committee to shape and reinforce the college’s values to the Council.
By Ben Kaplan — Staff Writer
Published: January 23, 2019

The Strategic Planning Committee is looking for a statement that more accurately reflects the college’s goals for the future and will serve as a guide for any new policies or changes made by the administration. La Jerne Cornish, provost and senior vice president for academic affairs, and Jason Freitag, presidential fellow for the provost and academic affairs, presented new language developed by the Strategic Planning Committee to both shape and reinforce the college’s core principles. The end goals will be well-defined, separate mission and value statements, Freitag said.

Cornish said that currently, the chosen slogan for the statement is, “Educating bold thinkers to inspire and create a thriving world.” She said the slogan and many of the values presented in the committee’s discussions draw from the School of Music’s original slogan, which was, “Engage, explore and empower through theory, practice and performance.”

“The statement will speak to our work moving forward,” Cornish said. “If it doesn’t speak to our vision, then why are we doing it?”

Freitag said the mission statement is still in its development stages, and the committee is actively looking for feedback from the college community. The Strategic Planning Committee has been looking at the overarching ideas people have about what the college should be as an institution and how these ideas compare to the administration’s vision.

Based on this overall feedback, he said, many faculty and administrators are in agreement that the college’s current business model is not sustainable and that the college should be looking to improve and create new partnerships, both within and outside its own community.

“Goal number one was introspection,” Freitag said. “What do people think about when they think about the future of IC?”

The mission statement was met with mixed reactions. Though the council was in agreement that, overall, this was something that was necessary and would provide a clean slate from which the college can build off of, the actual language for the mission statement was disputed. Council members nitpicked certain words and debated their intended meanings.

“The word practice implies that we’re never done getting better at what we do,” said Chris McNamara, clinical associate professor and clinic director in the Department of Physical Therapy.

Cornish said that much of the feedback for the earlier drafts of the statement had criticized it for lacking a punch, but some found the language of the current draft to be too broad or lofty and believed that it should be more direct.

“These sound like great descriptions for an NGO, but it doesn’t really describe an educational institution,” said Patricia Rodriguez, associate professor in the Department of Politics.

Cornish also briefed the council on the ongoing development of the faculty advocate position. Cornish said the Office of the Provost will be creating three new positions: an advocate strictly for faculty, an associate provost for faculty affairs, and an associate provost for academic affairs. All positions will be filled with internal hires, and they will report directly to the provost, working three-year terms with the option to renew the term after a one-year sabbatical, Cornish said.

Tom Swensen, professor and chair of the Department of Exercise and Sport Sciences and chair of the Faculty Council, provided a brief update on the Academic Policies Committee Attendance Policy and said that he had met with Registrar Vikki Levine to discuss changes to the language and that the two believe the policy should be a tri-council issue.

At the end so that the council could go into executive session to talk about budgeting.