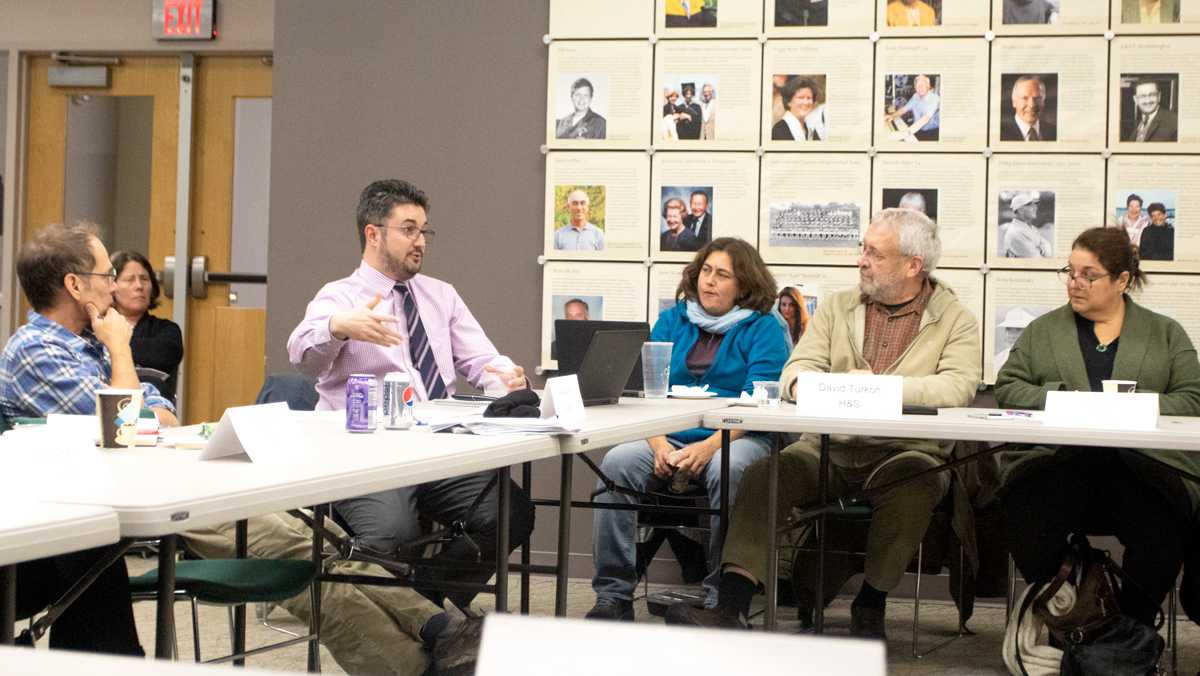 Brianna Mottey
The council also discussed the results of the 2018 Faculty Service Load Survey, which found that faculty perform much more service outside of the courses they teach than is required or expected. La Jerne Cornish, provost and senior vice president of academic affairs, was also at the meeting to further discuss the dean of faculty position she proposed at last month’s meeting. Council members also voted on the faculty justices for this academic year and debated an amendment to the college’s attendance policy.
By Ben Kaplan
Published: November 14, 2018

The Ithaca College Faculty Council discussed possible changes to freshman orientation and the course registration processes at its meeting Nov. 13.

The council also discussed the results of the 2018 Faculty Service Load Survey, which found that faculty perform much more service outside of the courses they teach than is required or expected. La Jerne Cornish, provost and senior vice president of academic affairs, was also at the meeting to further discuss the dean of faculty position she proposed at last month’s meeting. Council members also voted on the faculty justices for this academic year and debated an amendment to the college’s attendance policy.

Revisions to freshman orientation may include the addition of more preorientation resources, said Kevin Perry, associate director of New Student and Transition Programs and chair of the steering committee of the August Orientation Planning Committee. He said these may include online modules that would help new students better understand their first course registration process and provide a rolling access–based system for students to sign up for classes before they have even arrived on campus.

Perry presented the group’s progress in preparation for the Class of 2023’s summer orientation to the council alongside Dean of Students Bonnie Prunty, and Faculty Representative Catherine Weidner, professor and chair of the Department of Theatre Arts.

Weidner said orientation can be one of the most impactful moments in the early stages of a student’s college life because it is the first time students interact with their college community and start to make their own choices.

“We want to preserve that excitement and connection that faculty and students make from that first lunch to that moment when they leave with their schedules in hand and a gleam in their eye, walking out and feeling like they’re ready to get started,” Weidner said.

Prunty said one of the goals is for students to arrive on campus for orientation with a class schedule already prepared. To do this, the college would offer phone-based and online advising services and open registration to students over the summer, Prunty said.

“Whatever advising time during orientation will really be dedicated to making adjustments,” Prunty said.

Perry said the finalized date for orientation as decided by the steering committee will be Aug. 21, 2019 and will consist of a six-day program that will conclude on Aug. 26 with Convocation and classes beginning on the Aug. 28.

He said the committee has found a lot of support for condensing orientation into one event. Perry said having a singular orientation will put less stress on students because they will not have to adjust only to leave and come back again to move in. He also said the preorientation registration work will take a large amount of pressure off of faculty those first few weeks when classes begin. Previously, students would sign up and come to the college over the summer for a few days during scheduled orientation sessions.

“There are not a lot of opportunities to be able to bring 1,633 students together,” Perry said. “We really liked the idea of Convocation being a wrap-up for orientation. You’re finishing this program, and this is your transition right into your first day of classes.”

Council members were largely receptive to the changes being made. Peyi Soyinka-Airewele, professor and chair in the Department of Politics, said she supported the idea because it would make orientation more of a shared experience for the class.

Mat Fournier, assistant professor in the Department of Modern Languages and Literatures, said he supported preregistration as a better alternative to the current system because it would allow for professors to better plan course loads.

“In smaller programs, we need to know the number of students that are going to sign up for our classes,” Fournier said. “It is already difficult when two days before the semester, 200 students try to sign up for one class, and we have to cancel it because we do not have enough professors.”

As part of the ongoing planning process, the Orientation Committee will be hosting a number of forums for feedback and questions from both faculty and students starting Nov 30.

The council also reviewed the findings of the 2018 Faculty Service Load Survey. The survey, which was presented by David Gondek, council member and associate professor in the Department of Biology, had a 25 percent response, which Gondek said was average for the college. Gondek said the survey found no major discrepancies in service load based on faculty gender or race, although only 22 percent of those surveyed identified as a nonwhite ethnicity.

The largest finding from the survey, Gondek said, was that faculty were found to be working over twice as many hours as they were expected to. According to the survey, faculty spent an average of 54 hours a semester or 2.3 hours a day in meetings with students.

“Faculty at Ithaca College have a 24-credit workload and are therefore expected to complete about 1.5 to 3 credit hours of service per contract year depending on the teaching load of the respective schools,” Gondek said.

Cornish gave a brief update to the council on the process of establishing a dean of faculty position. She said she is giving the council permission to create their own job description for the position, which they will present to her in December.

The council also approved 22 faculty justices for the 2018–19 academic year.

The council chose to table a movement proposed by the Academic Policy Committee to change language regarding attendance policy. The proposed changes in language would reflect a failure on the part of the Student Affairs and Campus Life vice president offices. These offices are required to provide notifications of absence to faculty or dean’s offices, but according to APC’s proposal, do not usually do so except in circumstances of major illness or injury. The council chose to table the changes because they did not significantly address the ambiguity of the current policy in regard to what can be defined as a verifiable medical or mental emergency.

“Is [defining] a verifiable health emergency something that is faculty dependent?” said Tom Swensen, professor and chair of the Department of Exercise and Sports Sciences and chair of the Faculty Council.

The Ithacan was asked to leave the meeting toward the end so that the council could go into executive session to talk about honorary degrees.