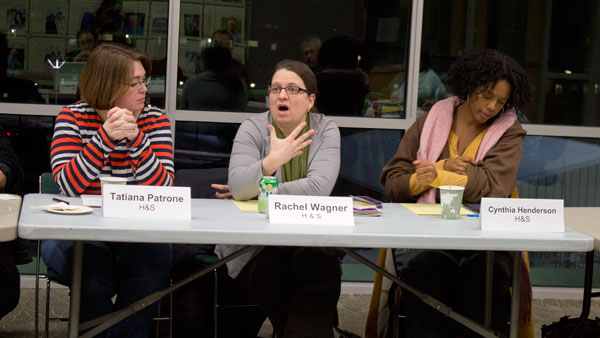 The Faculty Council discussed updates for the Faculty Handbook concerning faculty tenure at its meeting Jan. 21.

The main focus of the meeting was to discuss changes regarding tenure to send back to the Faculty Handbook Amendment Committee. Rachel Wagner, associate professor of philosophy and religion, said there is no college-wide policy for evaluating tenure and that there should be one. John Rosenthal, professor of mathematics, said he is uncomfortable with leaving tenure up to the different departments and that there should be more detail in the Faculty Handbook.

“There are certain things left to the discretion to the planning units and schools … and that troubles me,” Rosenthal said.

Diane Birr, professor of music performance, said she wants more specifications added to the Faculty Handbook because she doesn’t think the ambiguity will help down the road. Rosenthal said he wants to fix any misinterpretations to the wording. The Faculty Council accepted a motion to keep the document as it is for the time being.

The council also discussed including community service as an item required when considering tenure. Steven Skopik, chair of the Faculty Handbook Amendment Committee and professor of media arts, sciences and studies, said the Faculty Handbook is written in a way that doesn’t limit the college’s diverse faculty in pursuing a wide range of service opportunities.

“We recognize the wide range of faculty professional activity that ranges from the very traditionally academic to the professional preferences,” Skopik said.

Peter Rothbart, chairman of the Faculty Council and professor of music theory, history and composition, said each profession requires a different type of involvement, which could count toward a faculty member’s tenure.

“There is a clause that specifically mentions that faculty are encouraged as a part of their professional work, they may often find the context in which one goes out into the community and serves the community,” Skopik said.

Cynthia Henderson, associate professor of theater arts, said she isn’t comfortable devaluing community service. Though it doesn’t need to be mandatory, she said she feels that community service is an important aspect of relating to the community in which we live.

“There is a sense of devaluing it, and we are extremely dependent upon the community in which we live in and in which we are a part of,” Henderson said. “To say, ‘Oh well, you don’t really have to engage in that community if you don’t want to,’ it’s bothersome.”

Rothbart began the meeting by announcing a study looking into gender equality in salary will kick off in late March. Results are expected to be available by May 6, the last Faculty Council meeting of the academic year.

He also said Traevena Byrd, associate counsel and director of equal opportunity compliance, will reconvene the council to look into intellectual property.

Following up on a topic from the December 2013 Faculty Council meeting, Rothbart announced a decision that members of the alumni board who graduated from each school will be the ones carrying the banner at the beginning of each school’s section at Commencement.

MaryAnn Taylor, assistant to the provost, and Karen Emnett, manager of administrative operations in the Office of the Provost, attended the meeting to ask members of the Faculty Council to volunteer to determine awards for the Whalen Symposium, a celebration of student and faculty research in the fields of music, theater, film and art. Volunteers would be asked to read about four to eight abstracts submitted by students wishing to be entered for an award.

Rosenthal raised new business that he is concerned at the lack of cars in the student parking lots on the Martin Luther King Day of Service. He said the day is supposed to be an educational opportunity for students, and it seems clear to him that most students are using the opportunity to take an extra day to get back to campus before the spring semester.

Rosenthal suggested a study to see how effective days off like MLK Day are and to see if something should change with the structure of breaks and days off in the future.