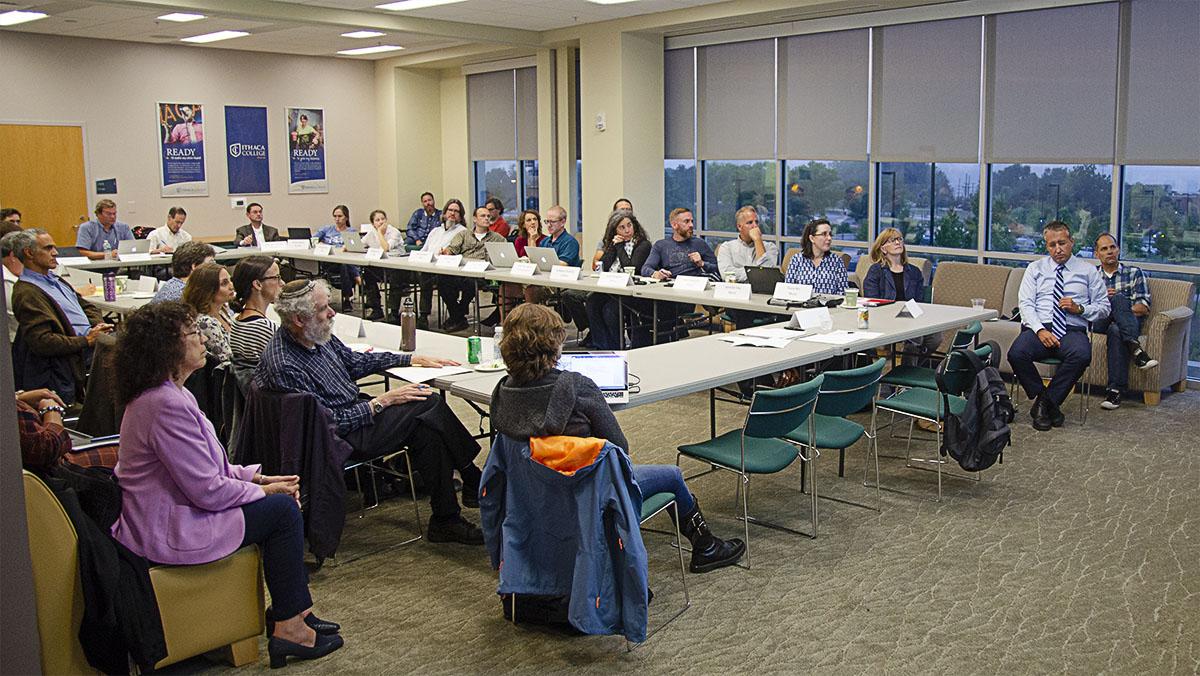 The Ithaca College Faculty Council discussed a four-credit schedule grid and shared governance at the college at its final meeting of the fall semester Dec. 7.

During the Open Session portion of the meeting, Laura Gras, professor and chair of the Department of Physical Therapy, opened the conversation by talking about concerns faculty members in the School of Health Sciences and Human Performance have about the potential move toward a 4-credit schedule grid, where more courses would be four credits.

Gras said faculty members are concerned about how including more 4-credit courses would impact the students who are in pre-professional programs — like the Pre-Health Professions Program. She said faculty are worried about how the schedule change would impact students’ abilities to take other courses outside of their major and electives.

Other members of the Faculty Council in other schools at the college, including the School of Music and the Department of Theatre Arts, expressed concern about the four-credit course schedule grid.

David Gondek, associate professor in the Department of Biology, recommended that the Faculty Council table the conversation and invite the Curricular Revision Liaison Committee (CRLC) to attend a future meeting.

In her report, interim provost Melanie Stein said she thinks the concerns faculty members have regarding the four-credit schedule are valid, but reminded members of Faculty Council that it will not be mandatory for departments to fully switch to a four-credit schedule.

“​​The current task is that folks are thinking about whether they want to change the balance in their departments, and what kind of accommodations we might want to make in a grid to accommodate a change in the balance,” Stein said.

Stein encouraged members of the Faculty Council to remain positive at the end of the semester, because of finals season for both students and faculty, as well as a rise in COVID-19 cases at the college and greater Tompkins County community.

The Faculty Council also discussed the representation of faculty on the Ithaca College Board of Trustees. Currently, there is one student, one faculty member and one staff member on the board.

Thomas Pfaff, professor and chair of the Department of Mathematics, said he is concerned about the small amount of shared governance at the college. Pfaff said he thinks faculty at the college have no say in decisions the board of trustees makes.

“I’m fairly certain that the board had charged Shirley Collado with decreasing the campus size and [Thomas] Rochon was charged to cut costs,” Pfaff said. “We have no say in any of those things at all. One token faculty representative doesn’t really change that at all. We’re not usually even aware necessarily what the charge to the president is. And so I would say, if we’re interested in greater collaboration and shared governance, that we have to have more influence on the board.”

According to the board of trustees, “the board’s Governance & Compensation/Assessment Committee is responsible for developing and recommending a slate of candidates for election or reelection.”

For the student, faculty and staff trustees on the board, the trustees are recommended to the Governance & Compensation/Assessment Committee by other governance bodies at the college, like the Ithaca College Alumni Association Board of Directors, Faculty Council, Student Governance Council (SGC) and Staff Council. The Governance & Compensation/Assessment Committee then nominates a trustee to the full board.

Steven Gordon, associate professor and television and radio program director in the Department of Media Arts, Sciences and Studies, said he thinks the best idea would be to have more representation of faculty on the board of trustees. He asked about what other colleges and universities do, in terms of having faculty, staff and students on a board. Syracuse University has two undergraduate representatives on its Board of Trustees, which is composed of 45 voting trustees. The Board of Trustees for the State University of New York (SUNY) system is comprised of 18 members and has one student representative who is the president of the SUNY Student Assembly.

Ellen Staurowsky ’78, professor in the Department of Media Arts, Sciences and Studies and a former alumni trustee on the board of trustees, said she thinks it is unusual for a college to have voting representatives from faculty, staff and the student body. She said a broader question that she has been grappling with is how the campus community holds its own board of trustees accountable.

Pfaff said he thinks there is zero accountability on the board of trustees, which he finds problematic, given the college’s fiscal status and how morale is low on campus.

Pfaff said that while he liked the idea, he is concerned that the Faculty Council does not know what types of decisions the board of trustees are even making.

Charis Dimaras, professor in the Department of Music Performance, said he thinks there is a lack of information between the board of trustees and the Faculty Council, which leads to both parties coming at issues from different points of view — with Faculty Council having a more academic perspective and the board of trustees having a business perspective.

“The lack of information is potentially creating all this tension, of which many aspects could potentially be alleviated by simply talking to each other,” Dimaras said. “So again, I agree 100% with [Young] of what she’s saying. [We’ve] got to get to the board. Faculty has to. No conduits, no in-betweens, no people that are filtering, nothing. Just us and them.”

Faculty Council holds most of meeting in executive session