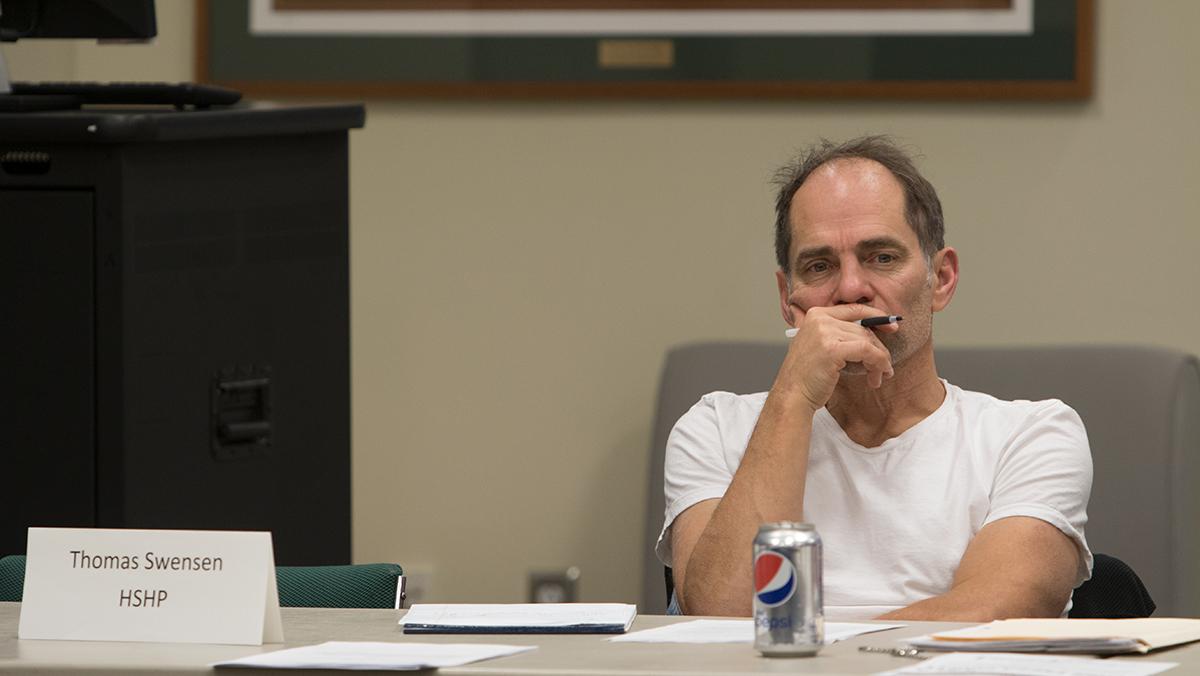 The Faculty Council’s executive committee is discussing and planning on having additional meetings closed to the public and press so that they are able to discuss issues with other faculty in a more confidential manner.

The proposed meetings, called “working sessions” are held separately from the council’s monthly public meetings, were originally proposed to the executive committee by Ithaca College President Shirley M. Collado, Tom Swensen, professor and chair of the Department of Exercise and Sport Sciences and Faculty Council chair, said. These meetings would serve as a time for discussing and vetting potential policies as well as other sensitive college business, he said.

“Sometimes during Faculty Council meetings we’ll go into executive sessions to discuss certain issues,” Swensen said. “The executive committee and the president thought there might be a better way to do this, so they came up with the idea to have a few extra sessions a year — if they’re warranted — to chit-chat with the president.”

Swensen said these sessions technically would not be official Faculty Council meetings, but would be brainstorm sessions to pick apart issues in an informal and non-binding environment. These meetings would also not be the first non-public meetings held on campus. Swensen said the All-College Faculty Tenure and Promotion Committee and Academic Policies Committee meetings are regularly private.

“We’re not going to be making decisions,” Swensen said. “We’re going to be discussing options.”

Patricia Rodriguez, associate professor in the Department of Politics, said that the fact that this proposition has not been shared with the greater faculty community concerns her.

“This is the first I have heard about it,” Rodriguez said. “So, not knowing anything about why it is being suggested, nor having heard of any initiative to inform or put it up for vote by the entire faculty, it seems strange and not very transparent.”

Laura Fomalhaut, lecturer in the department of writing said that as a member of the council and as the part-time faculty representative, she also was not aware of the decision to move forward with these closed meetings. She said that regardless of the status of the meetings, it is important to pay attention to how open governing bodies are with their constituents.

“I will say, in regards to the general question of private versus public, I think now is a time for more transparency with regards to governance at Ithaca, not less,” Fomalhaut said.

Swensen said via email that the executive committee did not feel that the addition of these meetings would be a significant enough change to inform the rest of the Faculty Council and larger faculty community about.

“The group didn’t feel like a broader discussion was warranted,” Swensen said. “It felt like normal business.”

Swensen said that former President Tom Rochon could have saved himself from a large amount of controversy during his time at the college by discussing ideas extensively before making them public. The former president was often met with backlash when implementing policies, such as the student media policy, for not hearing feedback from the larger college community.

Swensen said he thinks these meetings would actually lead to more effective and transparent policies by opening up the decision-making process to Faculty Council, which he said has not had much power in past administrations. Swensen said he thinks this is an opportunity for Faculty Council to be involved in policy formation as opposed to reacting to policies that had already been formed.

“I think it’s a good idea,” Swensen said. “The only thing that is unusual is that Faculty Council is involved and that is only unusual because we had not been invited to these discussions. … If Faculty Council is going to evolve into having more of a leadership role on campus, there are some things you have to talk about before you put them into effect.”

Michael Trotti, professor in the history department, said he also believes that the initiative would be a step in the right direction. Trotti had formerly been a member of the Faculty Council for four years from 2008–10 and from 2015 to Spring ‘17. He said that those meetings are some of the only times when faculty from across the campus can interact with one another and discuss issues that are facing the campus.

“Having those discussions in public all the time makes for stilted conversation,” Trotti said. “For a long time, I felt like it would be more productive for faculty to have a venue where they can talk things over candidly, so, for me, it has nothing to do with keeping the press out, but more to do with what will make for the best vehicle for governance.”