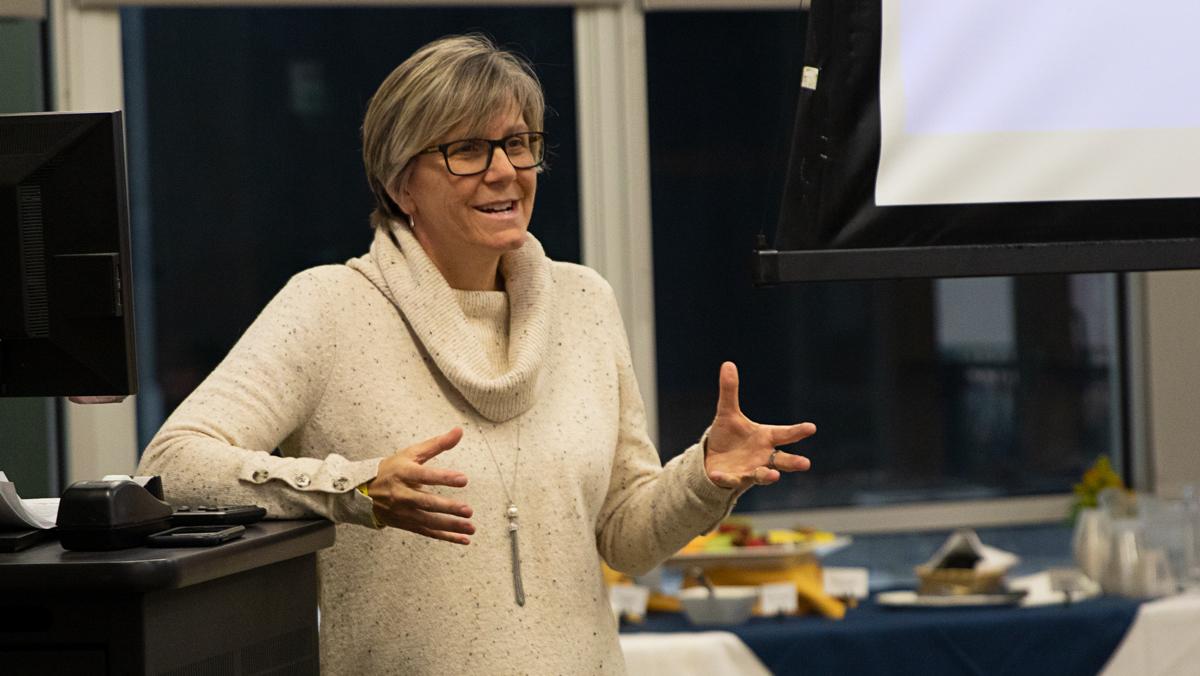 Laurie Koehler, vice president of marketing and enrollment strategy, spoke to the Ithaca College Faculty Council about improving retention rates at the college at its meeting Dec. 3.

Koehler spoke about different ways the college is attempting to analyze its undergraduate student retention rates and how it can be improved through marketing strategies and improving the student experience. She said the third-semester retention rate increased from 82.7% in 2017–18 to 87% in 2019–20. The retention rate for fifth-semester students is lower with only 77.1% of students remaining enrolled at the college in 2018 after their fifth semester.

“The best tools for yield are their peers, who they see coming to IC, who they meet when they come here,” Koehler said. “So the better their experience here is, the better a chance of yielding our students.”

Koehler said the college is more concerned about improving retention rates and the student experience than obtaining a higher ranking. The college currently ranks eighth in Regional Universities North on U.S. News.

Koehler said the college can use this ranking to get more people to apply to the school. The college admitted 10,326 students and enrolled 1,506 freshman students for the 2019–20 academic year.

Koehler said the college is also looking at the National Survey for Student Engagement to analyze the student experience.

Koehler said she recommends changing the language used with forms and notifications sent to prospective students from the Office of Student Financial Services and the Office of the Registrar.

“How can we be more friendly in the language we use?” Koehler said. “We have advanced degrees, and it is confusing. So imagine the first-generation student who’s going through this process and then gets an award letter and has no idea because we use lingo.”

She said the college hopes to address the gap between expected family contribution (EPC) and cost of attendance for every student based on the EPC estimate from the Free Application for Federal Student Aid. Koehler said the college cannot always cover the entire gap in scholarships and institutional aid. She said this is a potential reason for the retention rate among third– and fifth–semester students.

“So on top of the $20,000 that we told you was your family contribution, we are now asking you to come up with an extra $10,000, and students are taking out private loans to do that,” Koehler said. “So that could be a reason for third and fifth–semester drop–off.”

David Lissy ’87, chair of the Ithaca College Board of Trustees, and President Shirley M. Collado announced Dec. 4 that the board approved a 2.95% tuition increase for the 2020–21 academic year. The tuition for the next academic year is now set at $46,611.

Phil Blackman, assistant professor in the Department of Accounting and Business Law, asked Koehler about the trend of decreasing enrollment in colleges across the country.

“The population of high school graduates is going to be going down, particularly in the Northeast and Midwest,” Koehler said. “That puts schools like us, regional colleges, at risk in terms of enrollment. And that means we need to think about, number one, what should our enrollment be? And, number two, how are we building a plan for our students?”

Faculty Council also voted on proposed syllabus amendments from the Academic Policies Committee. The changes include requiring more detailed course descriptions and assignment schedules as well as a mandatory rule to include more information about Title IX and Student Accessibility Services.

It voted in favor of the proposed amendments with 13 members in favor of the changes, six members against and two members who abstained from voting. The proposed changes will now move to La Jerne Cornish, provost and senior vice president for academic affairs, to approve.

The council went into an executive session to discuss new policies, including policies regarding intimate relationships between employees and students, drones and the formulation and issuance of college policy, with Guilherme Costa, vice president of legal affairs, and Hayley Harris, vice president of the Office of Human and Organizational Development and Planning.