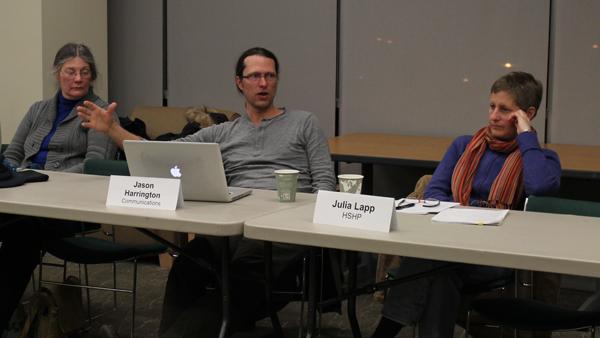 Peter Rothbart, professor of music theory, history, and composition, and chair of the Faculty Council, also said the Committee for College-Wide Requirements has open positions. He said this is an important committee for the Integrative Core Curriculum and IC 20/20 over the next year, specifically because all changes and modifications will go through the group.

“If people want to affect change in the ICC program, CCR is the path to affect that change,” Rothbart said. “So that position on CCR is very very important.”

He also relayed a message from Provost Marisa Kelly, who was unable to attend the meeting. Rothbart said Kelly said the Faculty Handbook Amendment Committee will begin to look at tenure and promotion because of requests from junior faculty members.

After an executive session, Steven Skopik, professor and chair in the department of media arts, sciences and studies, and representative of the Faculty Handbook Committee, came to discuss the problems with sabbatical applications, issues with tenure and promotion and other areas of concern.

Jason Harrington, assistant professor of cinema, photography and media arts, said he agrees with the process of adding amendments to the handbook that should be there but are not already.

“I don’t see any reason why we shouldn’t try to take this up and make things better for faculty,” Harrington said. “It seems like this is going to be a faculty process. At any point we can say ‘that would be bad.’”

The issue of shared governance was a large topic of conversation Tuesday. Christine McNamara, clinical assistant professor and clinic director, said the faculty should tell the administration what they think shared governance is and how they can help.

“I’m happy to see that we’re beginning these discussions, and I would encourage people to talk to their schools about if you value shared governance at this institution, what will that look like for you?” McNamara said.

“We are advisory,” Rothbart said. “There may be a question of fundamentally changing the nature of Faculty Council.”

Harrington said faculty members who participate in councils should receive compensation for the extra time they put into meetings and voicing their opinions, because that is time they are taking out of their busy schedules to become involved with these committees. He also said he sees the membership of current committees being the same people because others aren’t willing to step up.

“I am concerned though that instead of diversifying our voices, we’re going to get the same voices, just more,” Harrington said. “I actually think we are moving away from diversity and more towards homogenizing the same voices are heard even louder.”