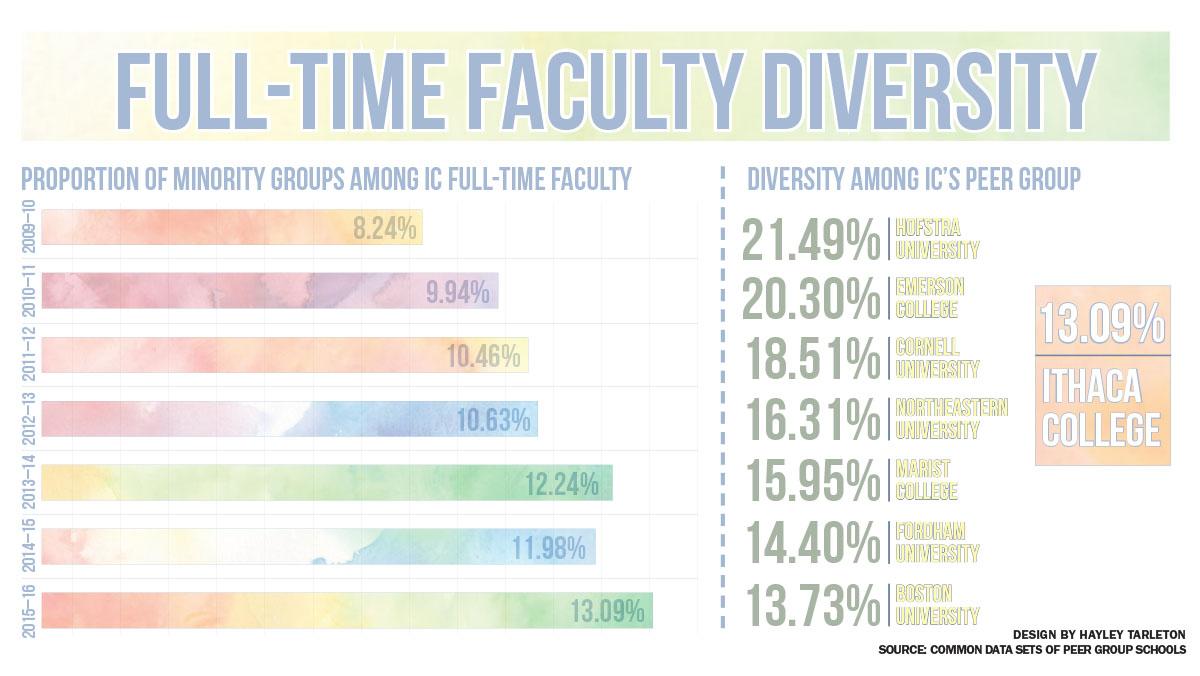 While Ithaca College has met faculty diversity goals and improved its faculty diversity by almost 5 percent over the past five years, many students and faculty members still believe that the college’s faculty is not racially diverse enough.

In Ithaca College’s Diversity Strategic Plan, adopted as part of IC 20/20 in 2010, the college set out to improve its percentage of full-time African, Latino, Asian and Native American faculty members from 8.2 percent in Fall 2009 to 13 percent by Fall 2015. The college achieved its goal, as 13.09 percent of full-time faculty members were members of minority groups in Fall 2015. ALANA students make up 20.3 percent of the total student population at the college.

In 2009, ALANA faculty made up 19.2 percent of all full-time faculty at degree–granting institutions nationally, according to the National Center for Education Statistics. In 2013, the most recently available data, 21.5 percent of full-time faculty members were ALANA. While the college increased its faculty diversity by 4 percent from 2009 to 2013, nationally, faculty diversity increased by 2.3 percent.

At the college, each department leads its own hiring efforts for faculty.

In September 2015, the college released new guidelines for faculty hiring, which included training for search committee chairs on eliminating bias in search procedures, diversifying search committees by including a faculty member from outside the unit that is conducting the search, and ensuring qualified candidates from underrepresented backgrounds are included in finalist pools.

Danette Johnson, vice provost for educational affairs, said the preference for Ivy League candidates is a potential source of bias during search processes.

“There are often structural barriers that prevent people particularly from groups that have been traditionally underrepresented in the academy having access to Ivy League institutions,” she said.

Johnson said each department also must identify five individuals who can reach a more diverse pool of candidates to contact about the posting. Those contacts are often from historically black colleges and universities or are individuals connected with Latino caucuses at national professional organizations.

She mentioned the recent expansion of the Diversity Scholars Program from just the School of Humanities and Sciences to the Roy H. Park School of Communications and the School of Health Sciences and Human Performance as a way the college has succeeded in expanding diversity efforts. This year, the program has two scholars in H&S and two in HSHP, and next year, the program will have two scholars in the Park School and two in H&S. Of the past 16 diversity scholars, the college has retained six in tenure-track positions.

“It’s been a good source for us for very talented faculty from traditionally underrepresented groups,” Johnson said.

Nguyen said if it wanted to become a leader in faculty diversity and not just give “lip service” to the idea, the college could include that work as part of what it considers for tenure.

“It must start rewarding instead of penalizing faculty of color for doing all the unpaid, unappreciated, unrecognized work of mentoring, advising and serving as role models for so many students — of being unofficial hired hands in student retention,” Nguyen said.

Adams said this type of “life-advising” hinders his ability to do more academic research and write academic papers. He said that due to the small number of faculty members of color on campus, students from minority groups have fewer professors with whom they may feel comfortable discussing their experiences at the college. Even though Adams said he values mentoring students more than research, in tenure processes, published academic work is essential.

Tyler Reighn, a junior film, photography and visual arts major, said diverse faculty members are necessary for students of color to know that they belong at the college.

“We’re already investing into perspectives that aren’t our own because, again, academia is not a world that was focused around our perspectives,” he said. “POC faculty don’t help give an excess to students of color. They give them the bare minimum. Them being here says, ‘Hey, it’s OK for you to be here at college. Your being here is worth it.’”

Nguyen said faculty members of color are often relegated to solely being professors in diversity fields.

“Let’s be honest: The dominant ideology and trend within academia with regards to diversity is to recruit for diversity when the area of expertise is that specific area of diversity,” Nguyen said. “In other words, unless the job calls for expertise in issues of race, for example, the hire will likely be white.”

In an article in The Chronicle of Higher Education, Rafael Walker, English professor at the University of Pennsylvania, examined faculties at the nation’s top 20 English and history departments in the subfields of medieval, early-modern Europe and 19th-century British English or history. Of the 21 English departments he examined, only one department had a black faculty member in the subfields that Walker called “well-established.” Of the 22 history departments he examined, only three had a black faculty member.

In the 2010 strategic plan, the college did not include any goals regarding recruiting diverse faculty in nondiversity fields.

Raza Rumi, a scholar in residence in the School of Humanities and Sciences, said he thinks the college should attempt to only hire people of color in all vacant faculty and staff positions.

“As a starter, IC should encourage all vacant positions and those that will fall vacant in the next five years should be reserved for recruitment of faculty members from the minority groups in the U.S. or abroad,” Rumi said.

There are also challenges in recruiting diverse faculty members, and faculty members in general, due to Ithaca’s relative homogeneity and location that is more than four hours away from any urbanized area, Johnson said.

But Nguyen said the college’s lack of diversity hurts its retention of professors of color more than its original ability to recruit.

“Given the dismal job market for professors, the racial composition of IC’s faculty won’t necessarily dissuade people of color from taking a job if offered,” he said. “But retention can be a big problem if that professor of color, for instance, prefers not to spend every single day being the token person of color when they interact with peers.”

“That’s a challenge because we have rising tuition costs and constraints with the budget and everything else, but attracting a more diverse candidate pool I think would be helped by offering more money for starting salaries for professors who could potentially be hired here,” Adams said.