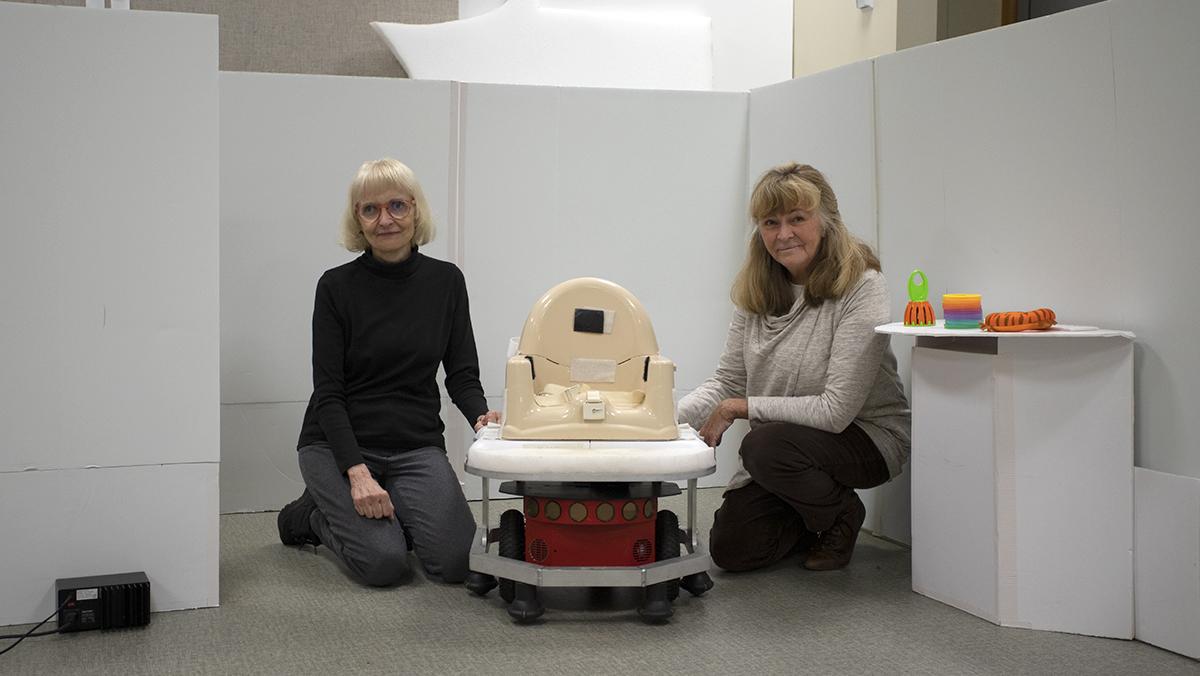 Rory Cassidy/The Ithacan
Carole Dennis, a co-founder of Assistance in Motion and professor emerita in the Department of Occupational Therapy, and Sharon Stansfield, the other co-founder and professor in the Department of Computer Science, began research at the college in 2001 to fill the gap they noticed in mobility aids for infants and toddlers with motor impairment.
By Noa Ran-Ressler — Staff Writer
Published: September 26, 2022

Current and former Ithaca College faculty members founded a company called Assistance in Motion to research, build and distribute technology in the hopes of bringing mobility to young children with motor disabilities.

Carole Dennis, a co-founder of Assistance in Motion and professor emerita in the Department of Occupational Therapy (OT), and Sharon Stansfield, the other co-founder and professor in the Department of Computer Science, began research at the college in 2001, with grant funding from the National Science Foundation (NSF), to fill the gap they noticed in mobility aids for infants and toddlers with motor disabilities. Dennis said the research team also has included more than 60 students over the years.

Dennis said the technology that already exists to assist infants and toddlers were joystick-operated and she wanted to make something more accessible. She said infants and toddlers often do not have the capability to operate joysticks, especially children with motor disabilities, making current robotic solutions ineffective.

“Kids learn so much from … exploration,” Dennis said. “[The inaccessibility] just frustrated me as an OT. … It would make sense, we believe, for children [with disabilities] to have mobility from as early a time as typically developing babies.”

Dennis said their solution is the WeeBot, a hands-free robot that infants and toddlers can sit on and control with small shifts on the seat. She said that because the robot does not require a switch or a joystick, children can reach for objects and interact with people when using it. Infants as young as five months old can control the WeeBot, and once the children learn to use it, Dennis said movement increases significantly.

“Our motivation is to help these children,” Dennis said. “They can control the world they live in through their mobility. [Otherwise] kids with disabilities … pretty much sit in one place, and the world comes to them.”

According to the Centers for Disease Control and Prevention, the most common form of motor disability is cerebral palsy, which affects up to 0.4% — or about one in 345 — of children. According to the University of Melbourne, other motor disabilities that can impact children include spinal cord injuries, muscular dystrophy and spina bifida.

Dennis said that other faculty members at the college have been involved with research from early stages, including Julie Dorsey, professor and chair of the Department of Occupational Therapy. Dorsey said her eldest child, who was nine months old in the fall of 2009, was the first child to test out the WeeBot.

“[Dennis] knew I had a little one and asked if I’d be willing to bring her in to do some testing,” Dorsey said. “As a parent bringing a kid in … [I remember] being really impressed with the way that students were involved with the research, even early on.”

Dorsey said she learned from the researchers about how infants explore their environment and how to make learning accessible.

“It was really impressive to see the students and their level of commitment to the research,” Dorsey said. “Everyone has to be flexible and creative.”

Madeline Smith ’10 began working on research with Stansfield in summer 2009 through an NSF–funded internship while she was finishing her undergraduate degree as a computer science major.

“Getting involved with research at Ithaca [College] totally changed the direction of my life,” Smith said. “Seeing that I could use my technical computer science skills on projects that could help people … was really exciting to me.”

Smith said she was on a research team with two other students, where they did background research, literature reviews and brainstormed and tested solutions for the Weebot.

“It was very much a collaborative project … understanding the problem and the technology,” Smith said. “As a group, we came up with the concept to test out different control methods.”

Smith said the WeeBot’s drive system was inspired by the Wii Balance Board, a platform that can detect shifts in weight when connected to Wii games.

“One of the students said ‘I think the Wii Board could do all of [the movements]’ … so that’s basically how we got started with a research prototype,” Dennis said. “We couldn’t have completed our research without the support of students.”

In 2019, Dennis and Stansfield asked Chuck Schwerin, managing director of business services for Tompkins County Area Development, to be their business mentor. The two professors formed the company, Assistance in Motion, in January 2020 and Dennis said she retired from the college at the end of 2020.

Dennis said there were issues with the initial prototype, like affordability and accessibility. The robot worked, but it cost $13,000 to assemble one robot, and Dennis said their goal was to make the robot financially accessible for families. The robot would also get stuck in corners and was hard to transport because of its size.

Dennis said they need a second prototype, which requires additional funding. Between 2001 and 2020, Dennis and Stansfield have received over $700,000 in grant funding from NSF, Cornell I-Corps and the New York Physical Therapy Association. Their most recent grant was from NSF for $256,000, which will be used to fund the new WeeBot prototype.

“[The college] has been very supportive of the research, particularly in the times between grant funding when the project could have ground to a halt,” Stansfield said.

Dennis said the next steps for Assistance in Motion involve meeting with engineers and other skilled professionals to complement Dennis and Stansfield’s skills. Stansfield said that once they have a better prototype, they will either sell the robots themselves or find another organization to sell them.

“We’re in it until it looks like it’s getting to the children that need it,” Stansfield said. “That’s been the whole purpose all along.”