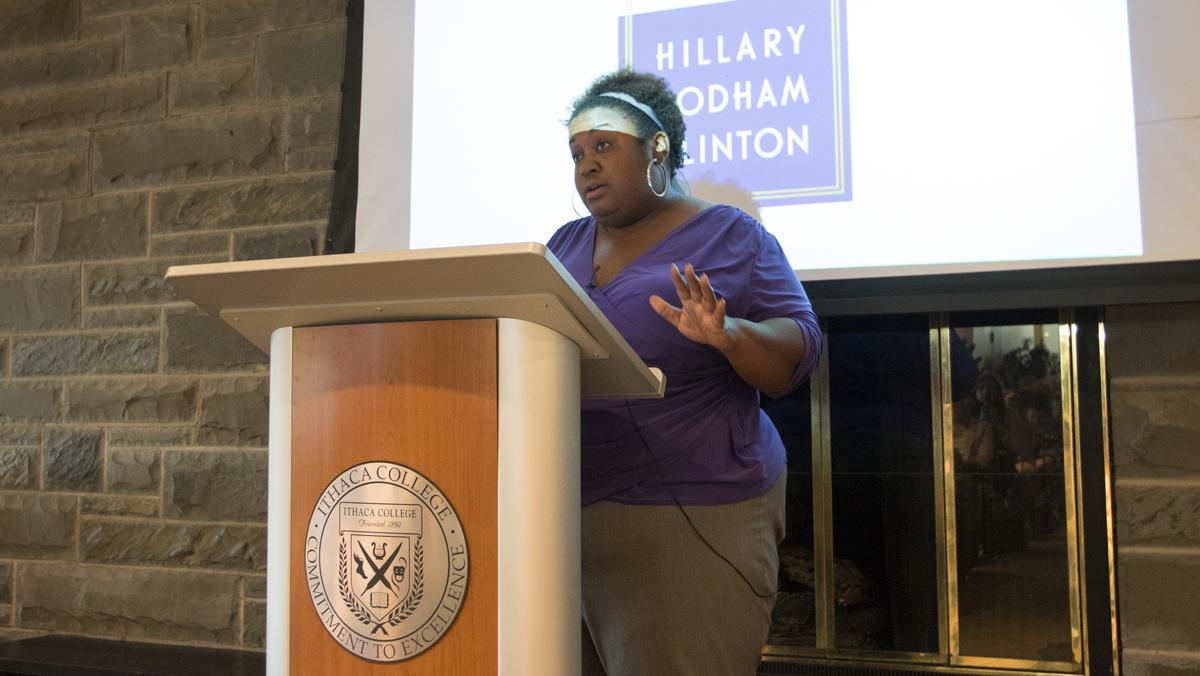 Brittney Cooper, associate professor of women’s and gender studies and Africana studies at Rutgers University New Brunswick, spoke to the Ithaca College community Sept. 26 about the continued relevance of patriarchy in society today.

Cooper kicked off her talk “Patriarchy Still a Problem? An Intersectional Interrogation” in a humorous fashion. She then delved into the 2016 election and how patriarchal aspects of society influenced it. Cooper also touched on the importance of intersectional feminism and recent movements such as the Women’s March and Black Lives Matter. This discussion was held in an overflowing Clark Lounge and was the first talk of the semester in the Center for the Study of Culture, Race and Ethnicity discussion series.

“White people did this,” Cooper said, eliciting laughs from the crowd. “And you can’t argue that it’s working–class voters. He won college-educated voters. He won voters that made over $100,000 a year.”

The significance of this, she said, is that white women are complicit in the oppression faced by women of color, even though both groups are negatively affected by patriarchal systems in society. Cooper questioned the appearance of the many white women at the Women’s March, who were protesting in defiance of the Trump administration. She said this demonstration was delegitimized by how many white women actually voted for Trump.

“It’s hard to believe that of the millions of women who gathered in the streets, that some of these ladies didn’t vote for Trump,” Cooper said. “I don’t believe it.”

Cooper said many black women struggle to join feminist movements. She said this happens because white women tend to only focus on their experiences, not the experiences of women of color. Cooper defined this as a type of denial, that white women identify more as white than as women.

“Black people don’t have to perform that type of denial,” said Cooper. “We are black, unapologetically.”

Following the discussion, Cooper answered many questions on how to be a white ally and use the privilege that one may have to help those who were born without certain privileges. For example, a student asked about a friend who is often mistaken for being white even though they are a light-skinned person of color. Cooper answered that ambiguous-looking people of color can use this privilege of being lighter skinned to help others.

“The other thing is recognizing that even if you’re a white person, presenting as a person of color, what you still have is white-skin privilege,” said Cooper.  “If you go through the world and most days people don’t know you’re a person of color, then that reflects how they relate to you. It reflects the kind of access you have… and it is important to name that and understand that.”

Graduate student Zihui Adams said she loved the presentation and thought it was an opportunity to look at intersections of politics and emotions. She said she appreciated how Cooper brought up different experiences of oppression different women of color face.

“We have different kinds of oppressions,” Adams said. “I don’t like to be like, ‘Mine’s worse,’ … I think it’s about community building, and that was a really big point of her’s, as well.”

Senior Will Stange said he thought it was important Cooper labeled her work as emotional work, as it is often labeled as political or social work.

“[Patriarchy] is what we have to deal with,” Stange said. “How do we move forward and acknowledge the value of the human soul versus whatever form it’s taking?”