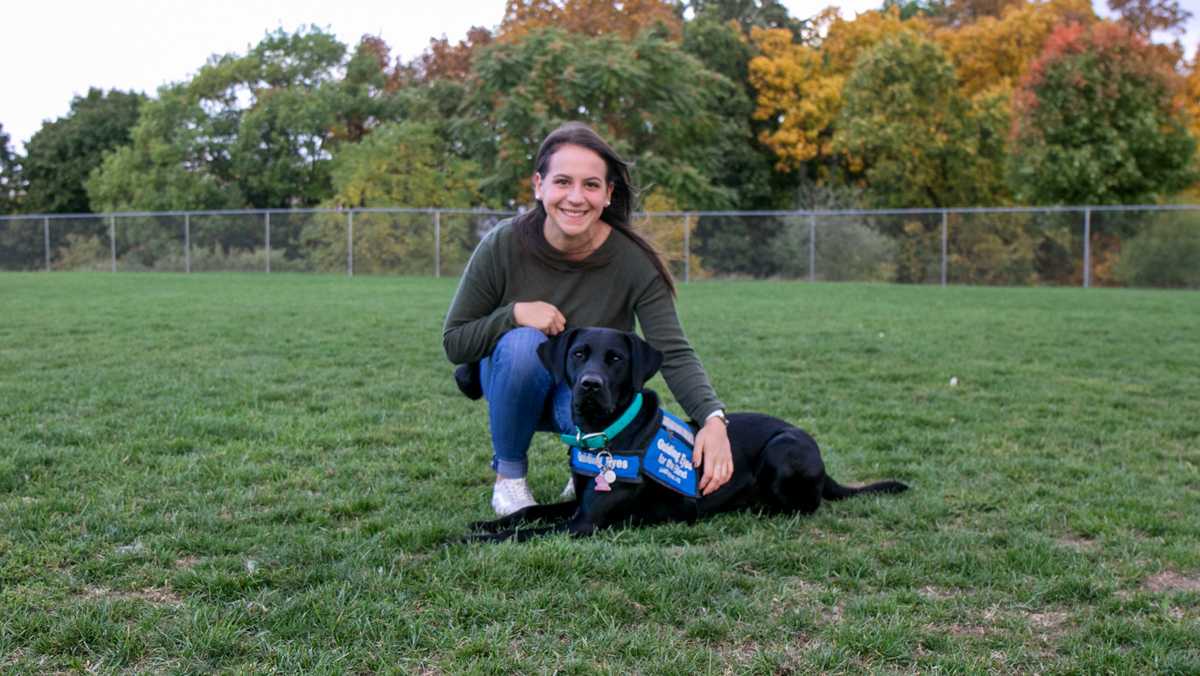 Ash Bailot/The Ithacan
Marissa Holske, a first year physical therapy graduate student, is raising her puppy, Wave, in Ithaca. Wave was expected to return to GEB for formal training in Spring 2021, but due the pandemic, Wave may stay with Holske for an extra eight months.
By Ryan Bieber — Staff Writer
Published: October 6, 2020

Guiding Eyes for the Blind at Ithaca College has had its paws full raising dogs amid the COVID-19 pandemic, which has delayed formal guide dog training. As a result, students involved in the organization will be raising the dogs for longer than usual.

Guiding Eyes for the Blind (GEB) is a nonprofit organization that provides individuals who are blind or visually impaired with trained guide dogs. GEB has been at the college for 28 years and allows students to raise the puppies in which they teach the dogs patience and socialization prior to formal guide dog training. Students typically raise dogs from when they are approximately eight weeks old until they are 16 to 18 months old, according to GEB. However, training has been delayed as a result of the pandemic, which means some students will foster dogs until they are 25 months old, Ben Cawley, director of training for GEB, said.

Currently, 12 dogs are being trained by 13 students, said senior Maddie Guerrier, co-president of GEB at the college. Seven of these students are living off campus in Ithaca, while the remainder are housing dogs outside the Ithaca area.

Despite the separation, Guerrier said that there are virtual Zoom trainings and informal, socially distanced training groups in Ithaca.

“As a club, we’ve tried to keep communication up among certified members and people who have dogs,” Guerrier said. “It’s a lot more just talking about experiences and ways to work through problems.”

Cawley said that it has been easier to get people to volunteer to raise and foster dogs but that there have been fewer people applying to receive guide dogs.

“We found that all we had to do is ask and put the word out and the volunteers were there when we needed them, so we’re definitely experiencing an increased demand on that side,” Cawley said. “On the applicant side of people applying for guide dogs, we have not seen that partially because a guide dog is a mobility aid that people used to travel, and I think a lot of our applicants aren’t traveling as much.”

Dog adoption and sales have spiked during the pandemic as more people choose to stay indoors and not travel. With more time spent at home, many believe now is the perfect opportunity to raise a new pet.

Training guide dogs in a pandemic comes with a special set of difficulties. Many Guiding Eyes dogs are supposed to be trained in environments with crowds so they can get used to ignoring distractions while guiding their handler. The program at the college takes advantage of the busy campus environment to train dogs around crowds, but because most students are not permitted on campus this semester, this poses a challenge.

Junior Kelli Friedman, co-president of GEB at the college, said not having access to the campus as a training ground for the dogs has complicated their learning process.

“One of the best places for the pups to learn is definitely on college campuses and classrooms because, with all of these younger people buzzing around all the time, it’s a good atmosphere for them to understand their purpose and responsibilities,” she said. “It’s hard for them not to have the exposure to all these things that they’re going to have to deal with and encounter as guide dogs.”

First–year graduate student Marissa Holske is currently raising her puppy, Wave, in Ithaca and said she has noticed similar issues.

“I’ve mostly been home with her a lot, which is good for both of us, but when things start getting back to normal, it’s going to be a big change for her because she’s not used to seeing a lot of people and doing a lot of things,” Holske said. “I think a lot of these dogs, because of COVID, are maybe thinking that they’re pets and not working dogs because they’re at home all the time.”

Still, Holske said that she is able to take Wave to the fields behind Emerson Hall almost every day, where she is sometimes joined by other raisers.

“We’re trying to do as much as we can to work with them,” Holske said. “I enjoy it very much, especially now that I have so much free time, so it works out so well.”

Holske said she is unsure how she will balance her coursework and the puppy now that she is raising her for longer. Holske said she was expecting GEB to take her puppy for formal training around February or March, but now Wave might not go back to the main GEB organization until November 2021.

“Things are changing, so I’m trying to work around her,” Holske said.

To keep membership up, Guerrier and Friedman have been hosting Zoom meetings for those who want to join the club. Friedman said they had 40 new members sign up for the club. These members will not be able to raise dogs until at least Fall 2021 but can still participate in events and learn about the process of raising guide dogs.

Cawley said that, as a whole, GEB has been able to adapt to the online world and that some virtual initiatives may even remain in place after the pandemic. He said that instead of doing in-person house calls, video calls can allow trainers to help raisers more immediately.

“It’s been a very innovative time period,” he said. “I think the industry will be changed forever with some of these technological advances, and the new protocols and procedures that we’ve come up with ultimately have been super efficient.”

Furry friends with a future: Meet Guiding Eyes for the Blind

Guiding Eyes for the Blind handlers form bonds with dogs