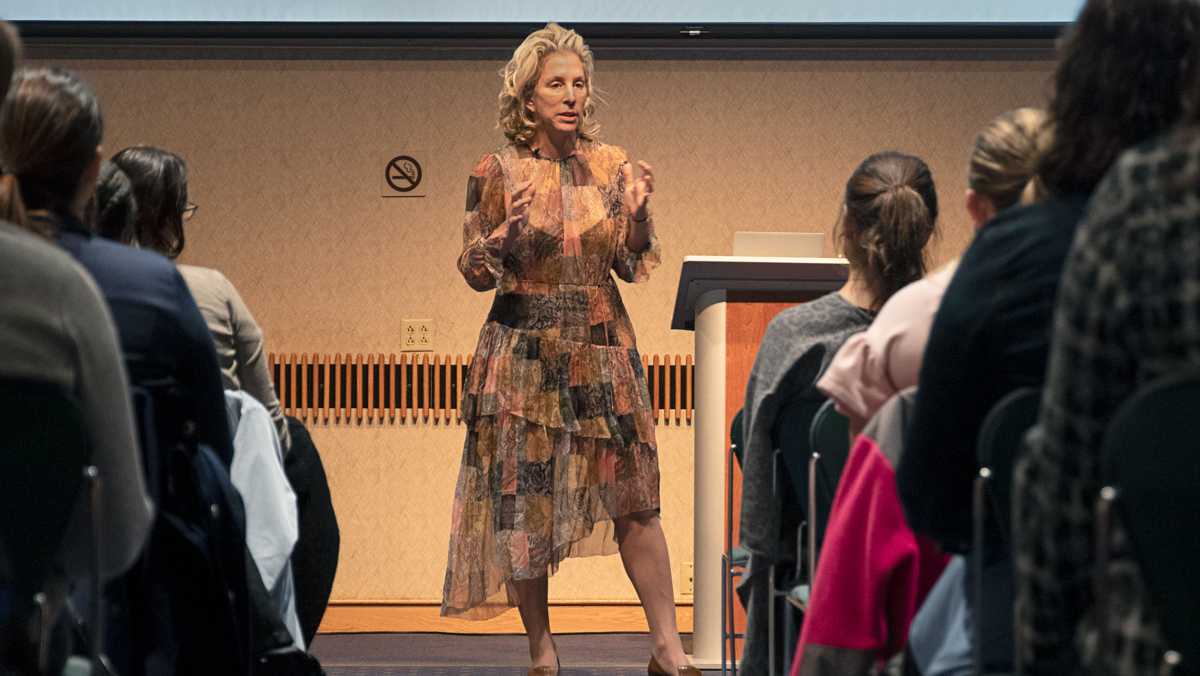 Shehanee Fernando/The Ithacan
Jan Singer '86 spoke at “Workplace 2020: The Elements you need to Ignite NOW,” an event hosted by the Ithaca College Women’s Mentoring Network on Oct. 24. She shared the story of her career and gave advice to approximately 100 female-identifying students, faculty and staff.
By Alyshia Korba — Staff Writer
Published: October 29, 2019

As Jan Singer ’86, former CEO of Victoria’s Secret, told her “secretary–to–CEO” story, junior BOLD Scholar Gabi Urbaez-Mendez watched from the crowd of women and saw what could be her future. Urbaez-Mendez and Singer went to the same high school, chose the same college and both care about empowering women.

Singer spoke at “Workplace 2020: The Elements you need to Ignite NOW,” an event hosted by the Ithaca College Women’s Mentoring Network on Oct. 24. She shared the story of her career and gave advice to approximately 100 female-identifying students, faculty and staff.

Singer said she started her career in the fashion industry as a secretary at Chanel and worked her way up with leadership positions at companies such as Calvin Klein, Prada and Nike. She then became the CEO of Spanx in 2014 and later Victoria’s Secret in 2016.

“I want to talk about this because the journey of this was a very traditional way of climbing the corporate ladder,” Singer said. “I realized that when you’re working that offense, intentionally or unintentionally, a ladder takes a few people to hold and one person to climb. Not sufficient today at all.”

Singer visited the college for a Board of Trustees meeting from Oct. 23 to Oct. 25 and was invited by the Women’s Mentoring Network to speak at this event. Singer is a member of the Academic and Student Affairs and Institutional Advancement committees on the Board of Trustees.

The Women’s Mentoring Network was developed in Fall 2018 by Julie Dorsey, associate professor in the Department of Occupational Therapy and faculty trustee, to connect female-identifying faculty and staff at the college. Dorsey said she wanted to have Singer host a discussion after she met Singer on the Board of Trustees.

“As soon as I heard Jan speak in the boardroom … I knew that we all needed to hear more from her,” Dorsey said. “She has this amazing ability that I keep witnessing to cut through any complicated issues and dynamics and see the possibility for change.”

“She went to my high school, so it’s amazing coming from where we come from and to see her position,” Urbaez-Mendez said. “I’m just really inspired now.”

Singer discussed the value women bring to the workplace and said the idea of a corporate ladder has shifted to a corporate collective as a result of women in business.

“How we are working and how we are leading is going through the change from ‘I just have to get promoted and I have to get to the next job’ to the collective, ‘How can we come together and help each other through?’” Singer said. “I would argue that that shift has largely to do with the amount of women in the workforce. I don’t think that’s new thinking for women. I just think there’s more of us out there.”

Singer said the importance of women having a supportive network is one of the reasons she wanted to speak at this event.

“We want to build bridges to break women up into leadership roles,” Madden said. “To see her come back to campus after graduating from here, it just shows me that ‘Wow, I could do that.’”