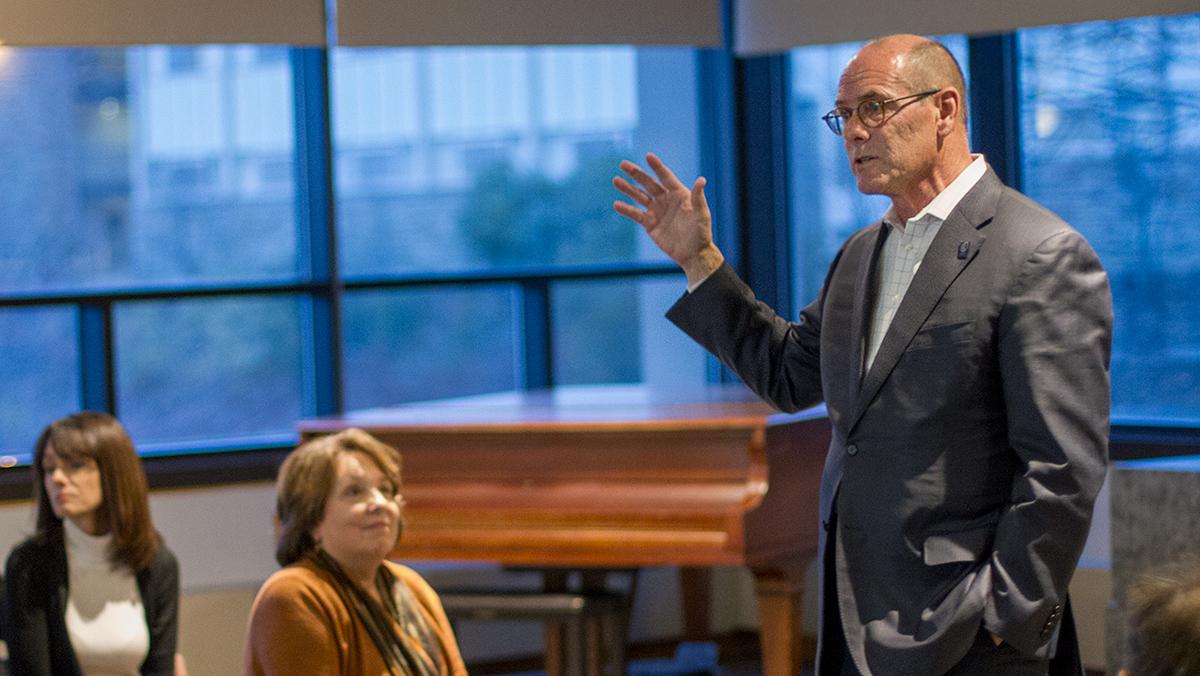 After the Ithaca College Presidential Search Committee announced it would no longer be bringing final candidates to campus for public meetings, it held a series of forums with campus community members Dec. 6 to discuss their thoughts and concerns about the decision.

In an email to the campus community late Dec. 2, James Nolan ’77, chair of the committee, stated the decision to make the process confidential was based on feedback from the candidates and the search firm. The original plan, as announced by the committee in August, was to bring finalists to campus in the fall, but now the search committee is expected to announce the president at the end of the Spring 2017 semester. The search committee met with members of the faculty, staff, student body and Administrative Assembly to discuss why the decision was made.

Nolan said in a public forum held in Clark Lounge that from the beginning of the search, Spencer Stuart, an international executive search firm hired to help with the search process, had advised the committee that an open search would limit its applicant pool. Many candidates fear that publicly participating in a search at another college could negatively affect their current careers or other presidential searches they might also be participating in, Nolan said.

“We, right now, really believe that this is in our best interest and efforts to move this forward,” Nolan said. “We really do need to change the strategy and embrace a strategy that keeps the confidential nature of our candidates at a premium.”

Carla Golden, a professor in the Department of Psychology, said she was concerned with the decision to make the search confidential because she felt the reason of having an open search was to attract candidates dedicated to transparency. Golden said that due to the student protests that occurred last fall, among other events, which criticized the administration’s stance on diversity and leadership capabilities, she thinks there is a discrepancy between promising a president who is transparent and collaborative and hiring a president who would not be willing to publicly be a finalist for the position.

Diane Gayeski, dean of the Roy H. Park School of Communications and a member of the search committee, told Golden that at the beginning of the search, she felt the same way.

“I went in with the thought that their openness to an open search would be correlated to their openness and transparency as a person,” Gayeski said. “But I was proven wrong.”

Gayeski said many of the candidates the search committee was considering were concerned about being involved in an open search for the reasons Nolan expressed.

While the committee does not have a set timeline to move forward with the search, Nolan said he is hoping that by the end of the spring semester, the college will know who the new president will be. After having had the discussions held Dec. 6, he said the committee will most likely bring other constituent groups into the decision-making process about the finalists while still keeping the candidates’ identities confidential.

Though the Student Government Association, now the Student Governance Council, published an open letter May 24 urging the search committee to employ an open search after many groups on campus expressed their dissatisfaction with the administration’s leadership, Marieme Foote, president of the SGC, said she agrees with the decisions to close the search.

“The committee trying to keep an open search was definitely a good step in attempting to see if this could actually work, but now that we’re seeing it’s not working in the results of the quality of candidates we’re interviewing, I think it’s really important we get someone who has a long commitment here,” Foote said.

Donathan Brown, associate professor in the Department of Communication Studies, said the conversations held were monumental in establishing an understanding of how the search will operate moving forward.

“I cannot walk out of here and say everyone agreed, but they understood, and this is a lot better than situations that we’ve found ourselves in the past,” he said.

Spencer Stuart, the executive search firm tasked with finding applicants for the ninth president of Ithaca College, met with members of the campus community April 19, however some of the sessions had a low student turnout.