The familiar “Tom Rochon: No Confidence” chant took a new form at POC at IC’s “Demands Walk-out” Dec. 11. POC at IC summoned Ithaca College President Tom Rochon to the stage at Free Speech Rock outside of Campus Center during a walk-out to hear a formal list of demands, with the crowd chanting: “Tom Rochon: Resign.”

At the “Demands Walk-out,” by 1:10 p.m. approximately 300 members of the campus community including students, faculty, staff and administrators gathered around Free Speech Rock to hear POC at IC “present demands and observe Tom Rochon’s display of incompetence to lead as President of our institution,” according to the Facebook event.

POC at IC emerged following a number of racial incidents at the college, including protests by residence assistants about insensitive comments made by Public Safety officers during a training, the planning of a racially themed party by off-campus fraternity AEPi and racial remarks made by alumni of the college at the Blue Sky Reimagining Kick-Off event Oct. 8. POC at IC held its first walk-out Nov. 11, with over 1,000 students walking out of class to attend a rally calling for Rochon’s resignation.

Senior Zach Mota, a member of POC at IC, said a criticism of the group was that they weren’t putting forth their demands clearly enough. Hence why the group announced its clearly outlined demands today.

From Free Speech Rock, POC at IC repeatedly asked Rochon, who was initially standing on the steps of Campus Center, to come to the stage to listen to demands, however, he did not immediately join them. Rochon used a megaphone to respond “I can see and hear you from here.” He then asked the group, “Are you prepared to engage in dialogue?”

The group called for the crowd to create a “peaceful pathway” for Rochon to walk through and join POC at IC on stage. The crowd linked arms as Rochon walked through from the entrance of Campus Center to Free Speech Rock.

Once Rochon was onstage, the group continued to outline Rochon’s “incompetence” as sophomore Violet Perry, a POC at IC member, read a document on Rochon’s lack of leadership at the college. Sophomore Tyler Reighn then took the stage, reading a factsheet on Rochon’s involvement as the chair of Tompkins Financial Corporation, stating that this involvement was compromising his ability to effectively lead and devote time to the college.

Freshman Alyse Harris joined the stage to discuss POC at IC’s view that the college may be labeled as “diverse,” however, the college has not created the infrastructure to support students of color. 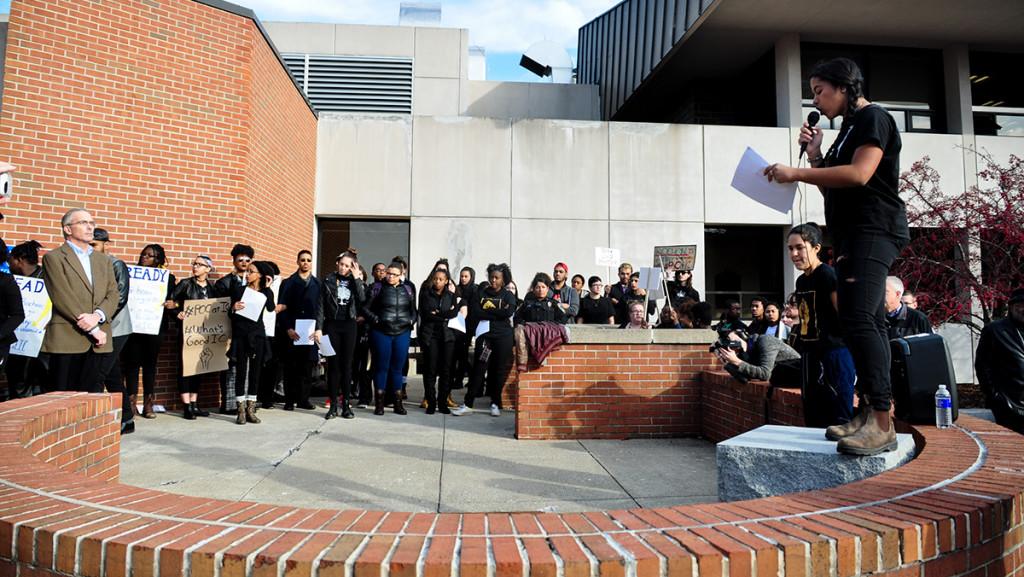 Rochon was then given two minutes to respond to the demands. He repeated his commitment to creating an inclusive environment and the efforts being undertaken at the college, and he also said POC at IC’s claims about the amount of time he was spending in his position as the chair of Tompkins Financial Corporation were untrue.

“Everything good on a college campus happens because of community,” Rochon said. “We get things done together only by working together.”

Rochon continued to address event attendees, and as he spoke, members of POC at IC counted down the time until his two minutes ended and cut off the microphone after his time was up.

Members of POC at IC then criticized Rochon for how he seems to not directly address them. POC at IC members then presented their list of demands to their audience.

Senior Rita Bunatal introduced their first, “uncompromisable” demand – the resignation of Rochon. This demand was repeated after each subsequent demand.

Their next demand is an amendment to policy that all future presidents will be selected through a democratic process by students, faculty and staff.

The group then mentioned how it wanted to create fair environment for “marginalized” groups and communities of all kinds, including the lesbian, gay, bisexual and transgender community; female students of color; and more.

Demonstrators also advocated for the immediate tenure of professors who were described as supportive of the movement, and demanded that faculty, students and staff who participated in the movement go unpunished for their participation.

They also discussed increasing transparency about Ithaca College Board of Trustees membership and asked to make more student trustees.

The walk-out then ended with freshman Marissa Booker asking attendees to continue the occupation of Peggy Ryan Williams Center throughout the weekend. According to the Facebook event, the occupation was originally scheduled to end at noon Dec. 11. The occupation ended Dec. 13, according to a post on the group’s Facebook page.

One last time, the crowd joined in on the chant “Tom Rochon: Resign,” as most of the crowd dispersed. Approximately 20 students, including some members of POC at IC, stayed to speak with Rochon.

“I am not considering resigning because I believe that I can lead us in working together,” Rochon said after the walk-out. “I can’t make it happen, but I can lead us to inclusivity.”

Mota said he doesn’t understand why Rochon won’t step down given the campus climate and student concerns. Mota said he translates Rochon’s refusal to respond to the demands as another example of inaction.

“The point is that if Tom Rochon and his administration were the kind of people that actually wanted to do the best for our community, they wouldn’t just do things under their terms. They would work with us under our terms,” Mota said. “The first step of that would be getting rid of Tom Rochon for all the reasons we said, and clearly, they’re not wanting to do that.”

Senior Ian Wiese said in order to come to a conclusion, a dialogue between both sides is necessary.

“My point of view is that we need the dialogue,” Wiese said. “We are in a situation where instead of just demanding a person’s resignation, we need to hear both sides and figure out a solution together.”

Carla Golden, women’s and gender studies coordinator and professor in the Department of Psychology, said the protest was not easy to watch because of Rochon’s humiliation as the protestors addressed him.

“It’s painful to see the situation Tom Rochon has put himself in,” Golden said. She also appreciated that students welcomed him up on stage to speak, but didn’t understand Rochon’s “awkward” refusal at first to go up onto the stage.

Golden said although she thought the student statements given at the protest were “quite good,” the demands might be unrealistic, showing “that students don’t understand either the tenure process, or how college presidents are selected, and that as a result they won’t be taken seriously.”

David Quiggle, assistant professor in the Department of Music Performance, said he is both saddened by the events taking place on campus but encouraged by the protests. Quiggle said it’s not his place to support the resignation of Rochon, but he understands why students want him to step down.

“I’m trying to open my heart to the pain people are feeling,” Quiggle said. “My place here is to listen, I think we have a lot to learn.”

As far as learning goes, Gerald Hector, vice president for Finance and Administration, said students and faculty cannot shift the blame solely on Rochon. Hector remained after the walk-out to talk and debate with students.

“What I think what is happening is we’re trying to deal with an issue of race, diversity, and inclusion, and were projecting it all on one person because he’s a leader,” Hector said. “I’m a vice president of color, and I can tell you it’s not just Tom … you have to have dialogue, even if you have hurt feelings. You’re not gonna get there by simply just protest, protest, protest.”

Hector said the students demands will not produce results that will completely change the campus climate.

“I stand here quietly and respectfully, but at the end of the day, I have to really ask myself the question: What are we trying to achieve? So the president leaves, are we going to remove the people with the racist tendencies and beliefs? Absolutely not. Absolutely not,” Hector said.

Carla Golden’s quotes have been changed from the original version of this article to better reflect accuracy and clarity of what she said to reporters at The Ithacan.

This story has been updated to include information about the conclusion of the occupation of the Peggy Ryan Williams Center.

Parita Desai can be reached at pdesai@ithaca.edu or via Twitter: @paritadesai_