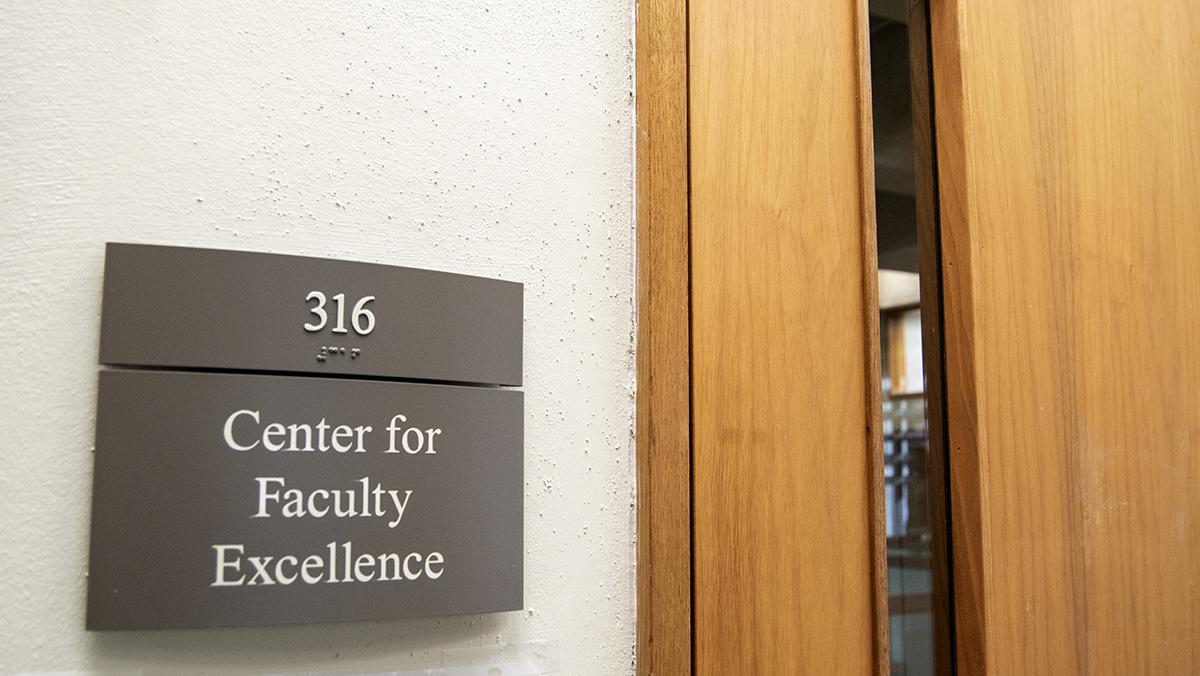 Maddy Tanzman/The Ithacan
Dana Teaching Fellows — named after the Charles A. Dana Foundation for its financial contributions — are tenured or tenure-eligible professors at the college who are selected by the Center for Faculty Excellence.
By Farid Ahmad — Contributing Writer
Published: October 19, 2022

Four Dana Teaching Fellows were selected for Fall 2022 to further Ithaca College’s goals of being an exemplary institution for faculty, staff and student development. This year, the fellows will focus on anti-racism learning, teaching and practices.

Dana Teaching Fellows — named after the Charles A. Dana Foundation for its financial contributions — are tenured or tenure-eligible professors at the college who are selected by the Center for Faculty Excellence (CFE). Fellows lead many types of sessions and events for other faculty members to aid them in providing students with positive learning experiences and paths to thrive academically. Their collaboration can help faculty members think of improved ways to teach, create new courses or alter current ones. Fellows provide faculty members with a space to share their experiences, as other members can relate to the obstacles they may face teaching at a college. Fellows are also responsible for holding meetings with one another throughout the year.

The prime responsibility for the 2022–23 fellows is to work with CFE’s Antiracism Institute, which was developed in 2020. The program runs every academic year and is for college faculty and teaching staff to have dialogues on race and racism and to help each other implement effective anti-racist education across campus.

Recently, the college has faced backlash from social media and right-leaning publications for the way the Antiracism Institute is organized. The backlash began after the Daily Mail published an article Oct. 16 claiming the Antiracism Institute plans to segregate white staff members. The college said in an Intercom post Oct. 18 that the media criticism is a distortion of the institute’s goals.

Cynthia Henderson, professor and chair in the Department of Theatre and Dance Performance and one of the main stage directors for the Center for Theater and Dance production season, is one of the new fellows. She said the roles of the fellows are geared toward helping the college become an enterprising anti-racist institute of higher learning.

“Currently, the new Antiracism Institute Dana Fellows are participating in Equity Literacy training,” Henderson said. “I will then be co-facilitating an affinity group. We will be working with faculty and teaching staff to navigate the challenges they are currently facing, as well as assisting them in finding working solutions related to issues of racism in classrooms, studios, curriculum, interpersonal interactions, etc. The plan is to later bring the affinity groups together to go deeper in the anti-racism work.”

Henderson’s anti-racism work did not start with CFE; she said she has been doing such work for decades. Henderson said that if one of the specializations of a professor in the college is directing, they direct a production in the Center for Theater and Dance main stage season, which runs throughout the academic year. She said she requested “The Colored Museum” by George C. Wolfe as her directing assignment when she first arrived in 2000, which kickstarted her anti-racism efforts at the college.

“‘The Colored Museum’ was the first play produced by the Department of Theater Arts that was by an African American writer, about the African American experience,” Henderson said. “In addition to the plays I directed, I taught from plays and texts by BIPOC writers, not as a special section but as part of the full course.”

Henderson said she is excited to be a fellow and is looking forward to the work she and the other fellows will be doing throughout the academic year.

“I am deeply appreciative for the creation of the Antiracism Institute and am enjoying what I am learning and will be doing as a Dana Fellow,” Henderson said. “As much as I came in knowing about the work we are doing, there is always so much more to discover. I love working with my Dana Fellow colleagues. We learn from one another, and to share what we are learning with our colleagues across the various disciplines at Ithaca College has the potential to be an incredible experience.”

Fellows differentiate from Dana Professors because fellows are selected for one academic year and their fellowship can be renewed for up to three years, whereas a Dana Professorship is a five-year award given to full professors. According to Matthew Clauhs, one of the co-directors of the CFE, Dana Fellows and Professors both work under the office of the provost, but fellows work primarily with CFE.

Another fellow, Kasia Bartoszynska, professor in the Department of Literatures in English, partook in the Antiracism Institute previously and wanted to become more involved. She said the institute strives to challenge and eradicate white supremacy and racism at the college. She said that reading “Why are all the Black Kids Sitting Together in the Cafeteria?” by Beverly Tatum was a pivotal moment for her interest in anti-racism work.

“She talks about how structural racism is like a moving walkway,” Bartoszynska said. “If you don’t want to get to where it’s taking you, it’s not enough to stop moving, you actually have to walk in the other direction and then eventually you have to turn it off and take apart the walkway and build a path to somewhere else.”

Greg Evans, assistant professor in the Department of Music Performance, is another new fellow and was part of the first cohort of faculty members to participate in the Antiracism Institute in Spring 2020. Evans said he wants to share his experiences and point of view to support the college in becoming a leading anti-racist institute.

“I am a Black man in America, I have experienced racism, and it’s painful,” Evans said. “I don’t know if I’ll live to see the end of that, but if there’s anything that I can do to help that arc lean toward justice a little bit earlier than if I didn’t participate, I would like to do that.”

Evans said he hopes to use what he already knows and will learn about anti-racism work by being a fellow to tackle injustices not only on campus, but beyond it as well.

“One of my future goals is to get even more comfortable with considering and applying actions about addressing inequities every day in my life, of course at this institution, in my work, but also just in my being,” Evans said. “I want to continue to develop tools and practices to efficiently address inequity and also efficiency in identifying inequities as I walk through this life. Part of that is in my work as a faculty member here at Ithaca College, but also as just an individual on this planet.”

The fourth Dana Fellow is Chris House, associate professor in the Department of Philosophy and Religion, but he was unable to be reached for comment.

Editor’s note: The majority of this reporting was done prior to the Daily Mail article and other criticism in the media of the Antiracism Institute.

Board of Trustees grants Dana and emerita status