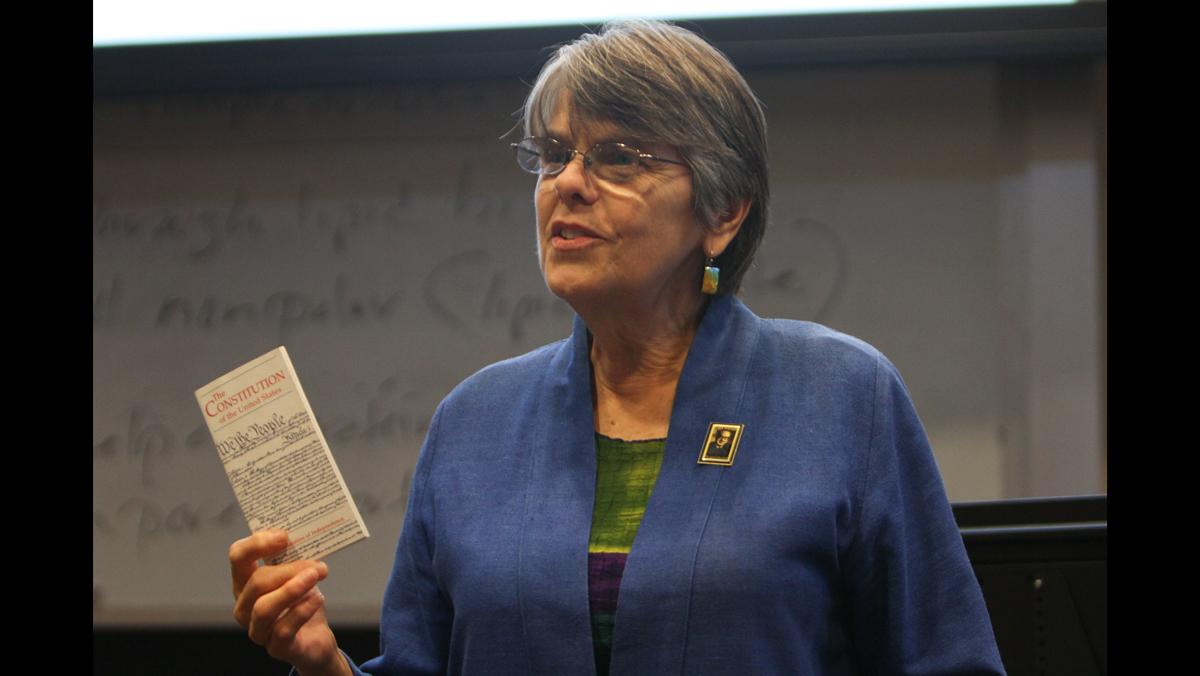 Activist and speaker Mary Beth Tinker was met with a round of roaring applause as she stood before a room full of Ithaca College students and community members Sept. 19. She tightly clutched a pocket-sized Constitution to her chest.

“The Constitution — small, but powerful,” she said, drawing silence. “Like young people.”

The presentation was co-sponsored by Ithaca College’s Department of Education. It was held in Textor 102 and drew an audience of approximately 60 people. Tinker’s talk focused on the vital role the First Amendment plays in protecting free speech for youth. This event was part of a “Constitution Week,” which is weeklong talking series during which Tinker will also speak at other local schools.

During the presentation, Tinker reflected on her past experiences regarding the freedom of speech. When she was 13 years old, Tinker and five of her fellow classmates in Des Moines, Iowa, were suspended for their decision to wear black armbands to school in protest of the Vietnam War, after the school outlawed the bands for “disturbing learning.”

Tinker and her fellow students sued the school district for infringing on their freedom of speech. The case eventually appeared before the Supreme Court, where it was ruled 7 to 2 that the school’s decision to ban the armbands infringed on the student’s freedom of speech and their suspension was deemed unconstitutional.

“The American Civil Liberties Union heard about [the issue] and offered to help,” Tinker said. “They said, ‘Well, you first have to start by trying to change the school board’s mind.’ Which we did, and we lost. So then we started a court case.”

“This is a way of life,” Tinker said. “Stand up and speak out when something’s not fair and something’s not right. Try to put democracy and all those ideas — equality, justice and faith — into action.”

Jeane Copenhaver-Johnson, associate professor and chair of the Department of Education, said she hopes that students gained a lot from the event.

“I also find it really educative that [Tinker] brought so much personal history with her here and was willing to share,” Copenhaver-Johnson said. “We are hoping it will inspire young people and older people to use their voices in the service of justice.”

Cindy Kramer, a history teacher at Ithaca’s Boynton Middle School, said she agreed with Copenhaver-Johnson, and that she also hopes Tinker inspired students within the community.

“I really appreciated that [Tinker] was able to integrate the personal and political,” said Kramer. “And that she’s encouraging people of all ages to really know and be informed about their rights and to use them in the interest of furthering democracy.”

Freshman Bianca Summerville said she was excited to meet a historical figure she had learned about in high school, especially since she is personally interested in the criminal justice system.

“Being in the audience was a super enlightening experience,” Summerville said. “I personally have always had a huge interest in the criminal justice system, so going through high school, I always paid special attention to all of the court cases that were discussed. Tinker’s was one that always came up.”

Pioneering political blogger and author John Nichols will visit Ithaca College today to educate students on the significance of the U.S. Constitution, particularly the First Amendment, in his speech, “First Amendment Remedies: The Constitution as a Call to Action,” in celebration of Constitution Day.

Vivian Gornick, a renowned author and critic, will speak as part of the Humanities and Sciences’ Distinguished Visiting Writers Series at 7:30 p.m. tomorrow in Beeler Hall of the James J. Whalen Center for Music. Gornick will offer a public reading from her work and will host a discussion afterwards. Gornick is the author of…

Acclaimed essayist to speak on campus