Future of clubs unknown amid faculty and program cuts 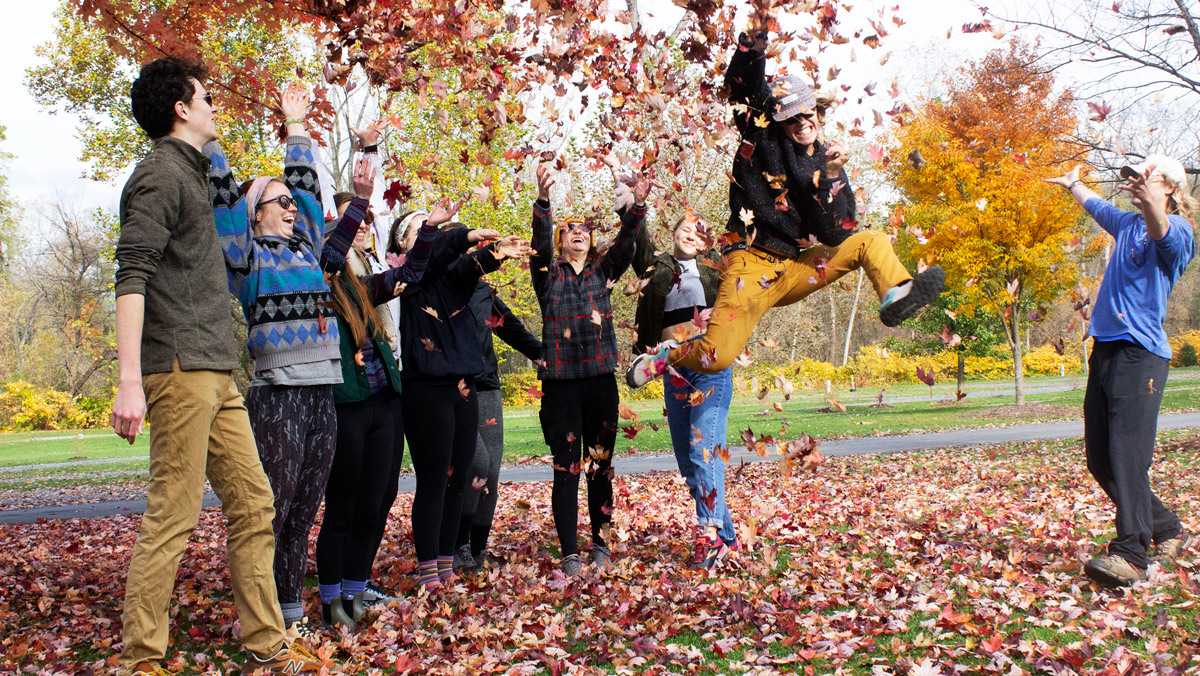 Cora Payne/The Ithacan
The Outing Club celebrates a hard days work of community clean up in 2019 by tossing leaves in joy. The Department of Recreation and Leisure Studies, which houses the club, is recommended to be cut.
By Elizabeth Kharabadze — Contributing Writer
Published: February 25, 2021

Some Ithaca College students and faculty members are concerned about the future of clubs that are losing advisers due to the impending faculty cuts.

The college will be cutting 116 full-time equivalent faculty positions per the recommendations of the Academic Program Prioritization Implementation Committee (APPIC). The Academic Program Prioritization (APP) cuts include several faculty members who serve as advisers to student organizations on campus. In order to be recognized as a club, student organizations need to have a full-time faculty member agree to be the adviser.

Michele Lenhart, director of the Office of Student Engagement, said that every year, there is some adviser turnover as a result of people leaving the college.

“The Office of Student Engagement can help with this process by posting requests to solicit a new adviser for a specific club or sharing the list of people who are interested in becoming advisers to see if there might be a match on that list,” Lenhart said via email.

Scott Thomson, assistant professor in the Department of Communication Studies, serves as the adviser for the college’s speech and debate team. His position is one of many being cut. Thomson said one of his main concerns for the team is securing funding for the budget for the upcoming year and finding someone to take over as adviser.

The speech and debate team currently operates as an official co-curricular activity under the forensics program within the Department of Communication Studies. As a cocurricular, the team receives most of its funding through the department. If the department can no longer sustain the speech and debate team, Thomson said the team would operate solely as a student organization, in which the budget would mainly come from the Office of Student Engagement — completely eliminating financial support from the department and making expenses for tournaments more difficult to obtain.

Thomson said that in the event of his dismissal from the college, he would still be willing to help the team in any way he could.

“Debate is my passion, and if I’m here in town and there are kids here that want to do debate, they’ll call me and I’ll help them without a doubt,” Thomson said.

Senior Callie Nguyen is the speech and debate team’s president. Nguyen said the speech team offers a safe and inclusive environment for students from all parts of the political spectrum to engage with each other.

“It’s sad because I feel like they’re taking away the chance for other students who are interested in speech and debate,” Nguyen said.

He said it might be difficult to find someone else to advise the club because they would need to have experience leading people in outdoor activities in a safe way. Vosler said he has a wilderness first responder certification, meaning he is able to provide first aid relating to injuries that might occur outdoors.

“With that going away, I really fear that a lot of students are going to miss out on those opportunities that add to the type of experience that one would want to have at a place like Ithaca College,” he said.

Juan Arroyo, assistant professor in the Department of Politics and adviser to the Model United Nations, is among the many faculty members being cut by the APP.

Arroyo said he believes the cuts would have an impact on student enrollment if Model UN were to be cut.

“Lots of high school students are totally passionate about [Model UN] and they want to continue in college,” Arroyo said. “Many people say, ‘I came to Ithaca College because of the Model UN team,’ and people stay at Ithaca College for the same reason.”

Junior Autumn Michels is a member of Model UN and said her time being part of Model UN has provided her with a community. Michels said she is worried about the future of the club.

“I think that Juan [Arroyo] makes the team what it is,” she said. “The kind of community that’s felt within the club is because Juan goes out of his way to make a community in his own house and in his daily life to involve the club as much as possible.”

Jennifer Herzog, lecturer in the Department of Theatre Arts, serves as the adviser for the Student Alliance for Israel (SAFI). Her position is also in jeopardy due to the APP.

Herzog voiced concern for the APP and the speed at which it was announced. She said she believed there was not much room for feedback from the community to be considered.

“It’s one thing to hear somebody’s issues, and it’s another thing to actually act on them,” Herzog said. “I don’t necessarily feel like these issues were processed in that manner.”

Herzog said that despite the cuts, she has faith in the future of SAFI. She said she hopes the club will continue with a new adviser. Herzog also said she would continue to support the club in any way that she could.

Sophomore Julia Young, president of SAFI, voiced concern regarding the future of the club.

“The campus is just losing such a valuable resource, someone who has so much knowledge to share and also so much comfort and support,” Young said. “She’s our professor, but she’s also our adviser, our mentor, our friend.”