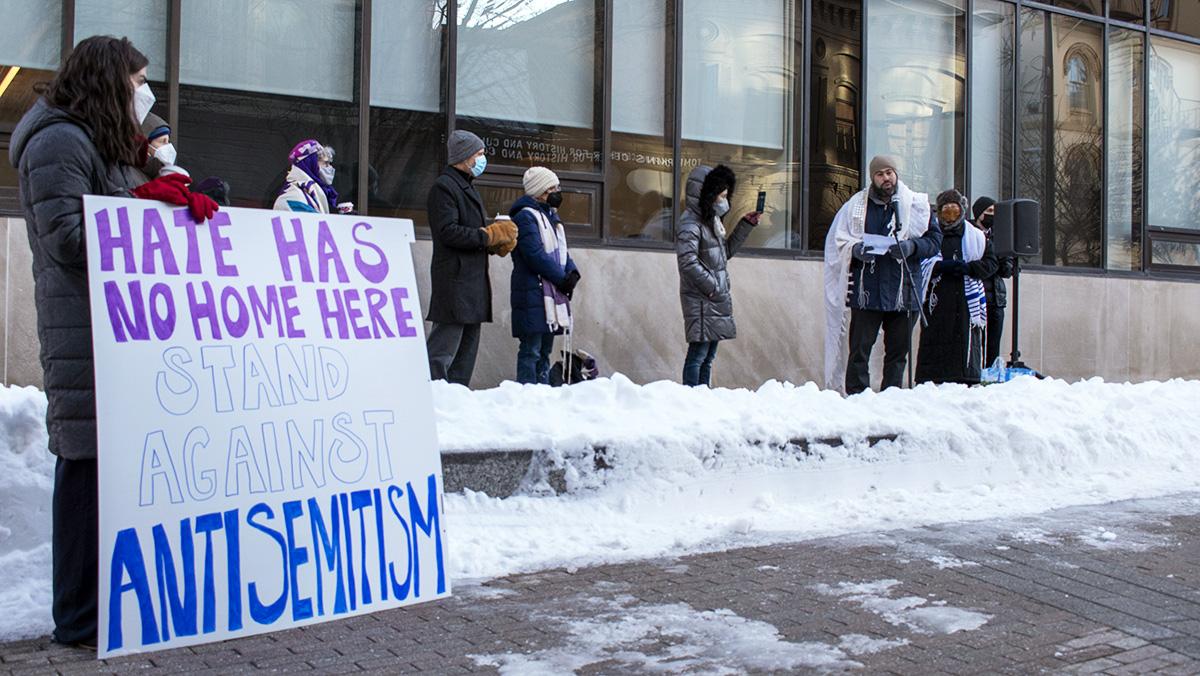 Members of the Ithaca community gathered in freezing temperatures Jan. 22 at the Bernie Milton Pavilion on The Commons in solidarity as a response to a hostage standoff at a synagogue in Colleyville, Texas.

During a Jan. 15 Shabbat worship at Colleyville’s Congregation Bethel Israel, 44-year-old Malik Fasil entered the synagogue and held members of the Congregation Bethel Israel hostage for more than 10 hours. At 5 p.m. one hostage was released and it was not until 9 p.m. that the other three hostages escaped. Fasil was killed after the hostage rescue team breached the building.

Assault, harassment and vandalism against Jewish people remain at near-historic levels in the U.S., according to the Anti-Defamation League (ADL). In 2020, the ADL recorded 2,024 antisemitic incidents, making it the third highest year since ADL began tracking in 1979.

The Ithaca gathering lasted 30 minutes and attracted around 40 members of the community. Leaders of local Ithaca congregations like Hillel at Ithaca College, Tikkun v’Or, Cornell Hillel, Al-Huda Islamic Center, First Baptist Church and Temple Beth-El came and shared their statements of support with the Jewish community.

Cantor Abbe Lyons, Jewish Chaplain of Hillel at Ithaca College, led the group in prayer and also opened and closed the gathering.

Mahmud Burton, president of the Al-Huda Islamic Center in Ithaca, said a violation of any house of worship impacts everyone, no matter what their religious beliefs may be.

“An injury that falls on your family is felt on my family,” Burton said. “The desecration of any house is an act that strikes all places of worship and something we must all stand unequivocally against in all circumstances.”

Rabbi Rachel Safman from Temple Beth-El said these hateful tropes have the potential to turn into justification for further hate crimes.

Safman said after the hostage situation in Colleyville, Texas, she and other members of the Jewish community were evoked to wonder why crimes continue to be committed against Jewish people.

“It’s my community that spent last Saturday glued to their computer screens, radios and televisions waiting to hear if once again our fellow Jews were going to be gunned down for the crime of showing up for Shabbat worship,” Safman said. “For testing our faith in God and our belief the world will be better than what it is now.”

In the past few years, the City of Ithaca and Ithaca College have experienced acts of antisemitism. In October 2020, businesses in Downtown Ithaca were vandalized with antisemetic and racist graffiti and posters, according to The Ithaca Voice. In April 2019, a swastika was found on a dorm door in Talcott Hall.

In order to combat antisemitism and create a better climate for the Jewish population, the college is taking part in Hillel’s International Campus Climate Initiative (CCI) for the 2021–22 academic year. The college’s Hillel had open drop-in hours Jan. 17 so that the college community had a space to process the hostage standoff that occurred in Texas.

Ithaca College sophomore Alexa Tamis attended the gathering and has been a member of Hillel at Ithaca College since her freshman year. Tamis said that hearing about antisemitic events that occur around the world has an impact on how safe she feels.

“Already living on a campus is scary, especially after last semester’s bomb threats,” Tamis said. “When you tie religion into it and the antisemitic people in the world, it’s scary. Especially for people who go to Hillel every Friday night, it’s scary knowing that something like that could happen and that there are people out there who would do such a thing to those who are just trying to practice their religion.”

Tamis said that she felt the event brought the Jewish and Ithaca community together and that she was surprised the event was attended by so many, including those who don’t practice Judaism.

“It was so nice to see so many people from other religions and beliefs coming together,” Tamis said.

Sophomore Carly Weiss joined Hillel at Ithaca College in Fall 2021. Weiss said that she feels protected at Hillel and feels safe knowing she has a group of people to lean on when antisemetic attacks occur around the world.

Weiss attended the gathering and said she was moved by how many different religions were there to support her Jewish community.

“I was so moved when a stranger reached out to hold my hand as the cantor sang the final song,” Weiss said. “I later found out that she was not even Jewish and that she was there for support. Her act of kindness made me feel safer to be in a gathering about Judaism.”

On behalf of Hillel at Ithaca College, I want to express our gratitude to the many individuals and organizations at…