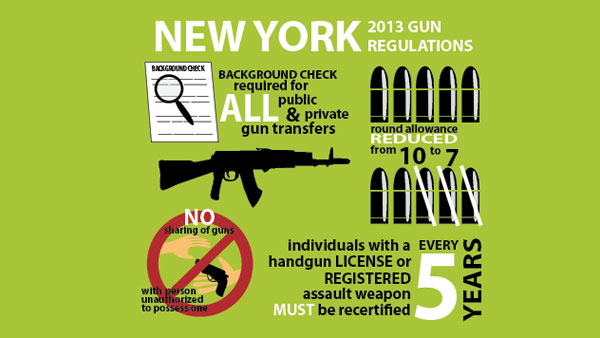 The Dec. 14 shooting in Newtown, Conn., shook the nation when 20 children and six adults were killed at Sandy Hook Elementary School.

On Tuesday, three people were wounded in a shooting at Lone Star College in Houston, Texas. According to the Associated Press, the authorities charged Carlton Berry as the shooter that injured himself and two others during an altercation.

Incidents like the Lone Star and Newtown shootings are what Obama said he is aiming to prevent with the 23 executive actions he signed Jan. 16. Obama’s actions include requiring background checks prior to all gun sales, strengthening school security, ensuring the mentally ill receive treatment and banning military-assault weapons sales.

In New York, Governor Andrew Cuomo signed the New York Secure Ammunition and Firearms Enforcement Act on Jan. 15 to further restrict gun sales in the state. At the local level, the Ithaca Police Department, in a joint effort with the Tompkins County Sheriff’s Office, has made efforts to remove illegal guns from the community.

While Ithaca Mayor Svante Myrick said he has not read Cuomo’s gun legislation, he said he is impressed with the provisions he has heard about.

“It is going to help us get more guns off of the street,” Myrick said.

“The governor has passed a serious package for gun violence reduction, and the mayor has obviously done a tremendous job in his capacity to try and eliminate access to gun violence in Ithaca as well,” Flaherty said. “As tragic as these events were, I hope that we are using this as an opportunity to take action to prevent more victims from dying unnecessarily.”

“It says right in the Constitution, that the right of the people to keep and bear arms cannot be infringed upon,” Grove said.

The Ithaca Police and the Tompkins County Sheriff’s Office have generated two initiatives in an effort to curb gun violence locally. The two law enforcement offices hosted a “Gun Buyback Program” on Jan. 5 to provide residents with an opportunity to surrender illegally owned or unsecured guns in an effort to prevent the guns from falling to people who may use them for illegal purposes. According to the Ithaca Police Department, they collected 75 handguns and 72 shotguns and rifles, two of which were assault rifles.

Myrick said he had contacted the IPD about having a gun buyback and that he was thrilled with the number of guns turned in at the event because an event like this had never been done before in Ithaca.

“We thought even one gun would be a hit,” Myrick said.

Once the guns were collected, they were sawed in half and recycled on-site to prevent them from falling into the wrong hands, Myrick said.

Plans for another gun buyback event are under way. Myrick said the police department will hold another event in the spring or summer because people have called requesting to privately donate their guns.

Myrick said after the Sandy Hook shooting he felt more needed to be done to prevent future gun violence.

“I thought to myself, ‘There must be something we can do so we’re not powerless in Ithaca.’”

Ithaca College’s Office of Public Safety holds guns in Weapons Storage at Public Safety for residential students who hunt because the college does not permit students to have guns or other weapons on campus.

To store guns or other hunting weapons at Public Safety, students must show photo identification and the proper permits if their gun requires them.

“Some weapons in New York state do not require a permit,” Dunn said.

Students have access to their guns whenever they want them because Public Safety is open 24 hours a day.

Dunn said all police officers on campus carry a Glock pistol, which is the standard gun of law enforcement in New York, and that they also have access to rifles and shotguns as well.

In December, President Tom Rochon signed a letter addressing Obama in support of his efforts to tighten gun control. Rochon was one of 255 college and university presidents who signed the letter.

Obama has taken 23 executive actions since the Newtown shooting; one of the actions calls for model emergency response plans for institutions of higher learning.

Cuomo’s act includes restrictions on the sale of guns and ammunition as well as increasing the penalties for gun-related misdemeanors and limiting the number of bullets in a magazine.

“These are common sense measures that I think are overdue,” Myrick said.

However, Myrick disagrees with the provision in Cuomo’s bill that criminalizes possessing a gun on school grounds because it does not include an exception for police officers and first responders.

Cuomo has received negative backlash from the National Rifle Association and law enforcement agencies in regards to the New York Secure Ammunition and Firearms Enforcement Act. A Jan. 14 article in the New York Times also addressed a potential breach in doctor-patient confidentiality because the bill requires therapists to report potential threats of gun violence made by their patients.

In a Jan. 14 press conference Cuomo attributed the haste in which the legislation was drawn up as an active effort to prevent another tragedy.

“It won’t solve all the problems, but it will do something,” Myrick said.