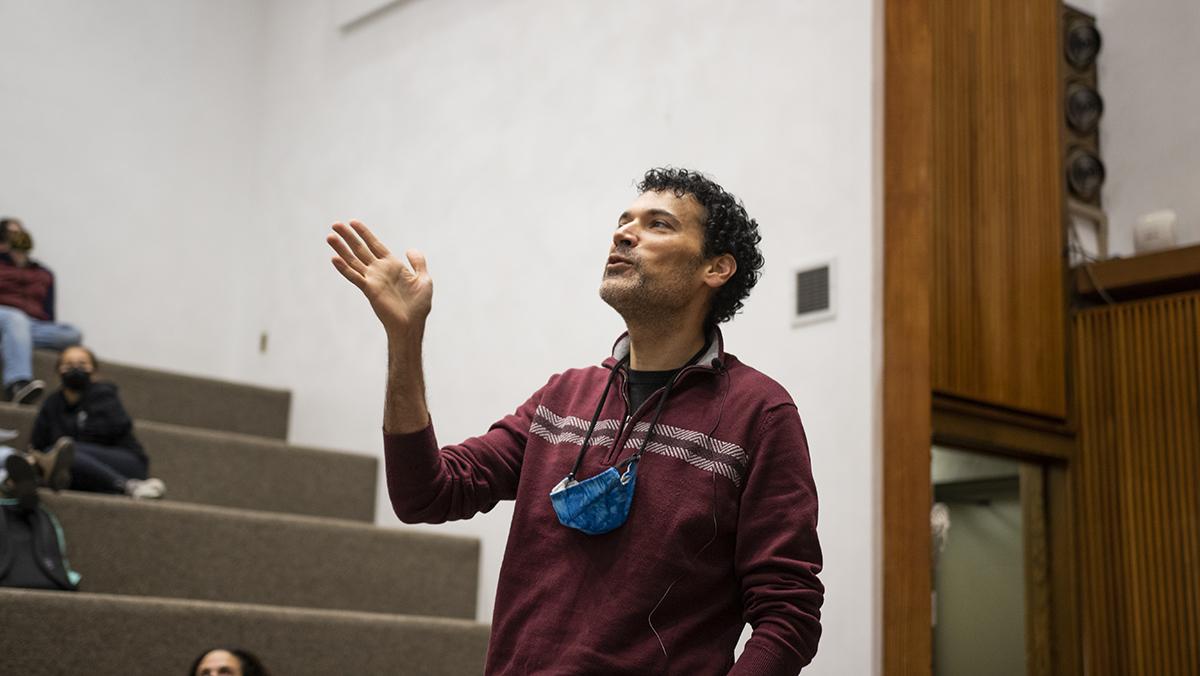 Experts whose lives have been shaped by the ongoing conflict between Israel and Palestine engaged in a public conversation about the conflict at “Side by Side: Parallel Histories, Personal Family Narratives + Ideas for Pathways to Peace for Israel + Palestine” on Nov. 2.

The conflict between Palestine and Israel is traced back to the late 1800s, but the modern issues can be traced to 1947 when the United Nations divided Palestine into two states, one Arab and one Jewish, according to the Council on Foreign Relations Global Conflict Tracker. This sparked a war that established the state of Israel in 1948, and displaced 750,000 Palestinians at the war’s end in 1949 as well as dividing the territory into the State of Israel, the West Bank and the Gaza Strip, the Conflict Tracker said. Following this event, tensions in the region remained high, leading to decades of conflict and several rounds of unsuccessful treaties and peace accords due to unresolved issues, according to the Conflict Tracker.

Today the conflict revolves around control over disputed territories, specifically the West Bank, East Jerusalem, and the Gaza Strip which are all currently under Israeli control following the Six Day War in 1967, according to the Side by Side Glossary of Terms.

In order to make the event digestible even to those less familiar with the conflict, attendees were given a glossary of terms relevant to the conversation.

Lauren Goldberg, executive director of Hillel, was the moderator for the event. She said this kind of event is important because conversations around the conflict can be extremely difficult, tense and volatile.

The event allows for people to personalize the issues and understand a timeline around the conflict, Goldberg said.

“[The conflict is] one of the most complicated and divisive issues of both our time and throughout generations,” Goldberg said.

Abulof and Farsakh began the conversation by sharing some of their family histories in Israel and Palestine respectively before discussing their opinions on the conflict with each other.

Farsakh started the presentation by describing his family’s history in Palestine and elsewhere, and how their life experiences relate to the conflict. He said his family was forced to leave Palestine in the 1960s, but was able to return in 1999 after which he served on a negotiation team for the Palestinian government.

Abulof followed, sharing his own life story and family history. He said the question of where he is from is a complex one, but ultimately he would say most accurately that he is from Jerusalem.

“From both speakers what I’ve heard tonight is that this is exactly the kind of thing that is a precursor to moving us up the hill because until we have these kind of dialogues together and are truly hearing each others’ stories and perspectives, there’s no hope of moving together in a shared society,” Goldberg said.

Both Farsakh and Abulof said the conversations between Israel and Palestine will not produce a solution unless they are willing to understand the experiences and needs of the opposing group. They said a change needs to happen.

Farsakh said this change can come from a new perspective and initiating conversation between the two sides. He said Palestinians and Israelis alike are too focused on honoring their ancestors and remembering the past. Instead the focus should be on what kind of world they are building for their children and the future.

Abulof said he and his wife recently lived in the French Hill neighborhood in Jerusalem, an area that is populated by Jews, Arabs and others together. He described his wife’s involvement with Maan Yahad — a group whose name in English translates roughly to ‘Togetherness’ — where people of many different backgrounds in French Hill gather to host events and demonstrations.

“It’s very hard to demonize someone that you chose to go to lunch with,” Abulof said. “I think the key to making things better is people talking respectfully.”

Similarly, Farsakh said he has perhaps learned the most about the conflict from his interactions with people from Israel. He said the Israelis and Palestinians need to find a way to cohabitate, and can only do so by engaging with and understanding others.

Farsakh concluded by saying once again that open conversations about each sides’ needs and action directly from the people are essential to finding a solution.

“Can we articulate a vision where everyone feels included, safe and that they are able to influence politics?” Farsakh said.

Following the event, Freshman Jamie Lanza said she had wanted to attend the event because growing up as a Catholic with many Jewish friends and neighbors, the event seemed like an interesting opportunity to learn about issues that were important to people close to her.

“I definitely feel like I’ve gained a little perspective from it,” Lanza said.

Freshman Samuel Schadt said after the event that he attended to learn from experts on a subject he was frequently hearing about on the news.

“It was interesting to hear both of the speakers’ backstories with their family history and everything, it just gives some more context into where they’re coming from,” Schadt said.

Religious and spiritual leader to leave college in November