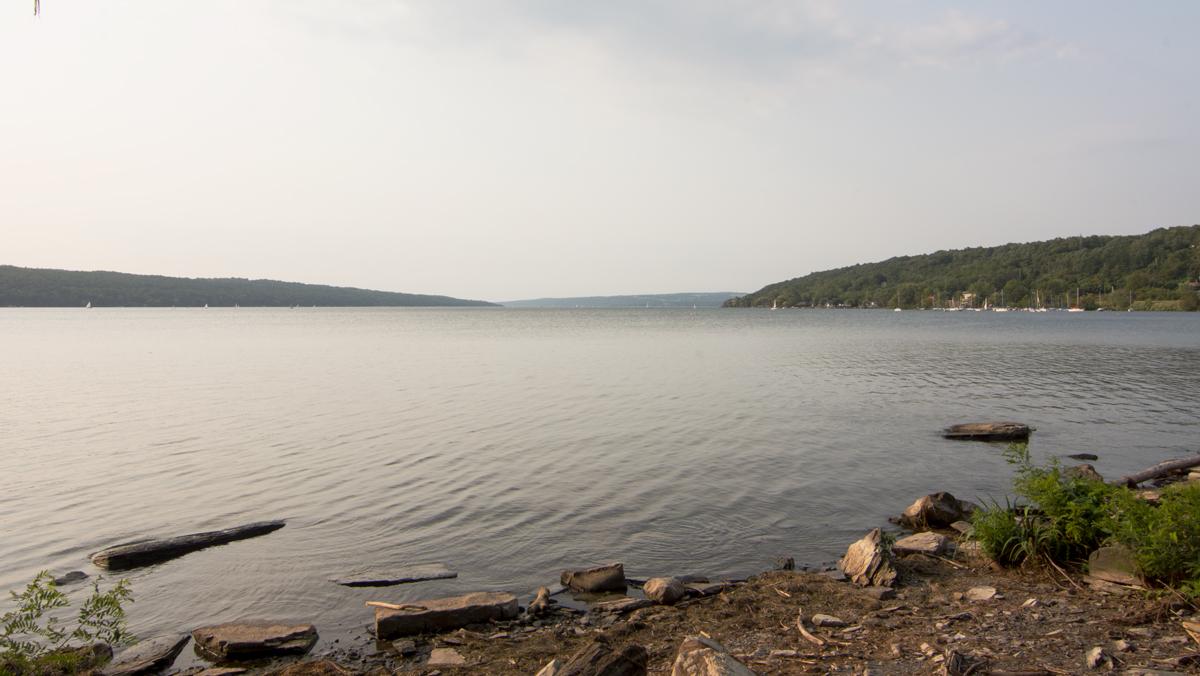 Teddy Zerivitz/The Ithacan
Lake Cayuga was one of Ithaca's ecosystems affected by the heavier than normal rainfall this summer. Harmful algae has taken root in the lake due to the overabundance of rain.
By Sierra Guardiola — Assistant News Editor
Published: September 4, 2017

Tompkins County has been heavily affected by the overabundance of rain during the summer, causing harmful algae to bloom in Cayuga Lake.

In 2016, the area experienced an extreme drought. With a wetter summer in 2017, there was increased runoff into the lake from the surrounding areas, Samantha Hillson, director of health promotion for the Tompkins County Department of Health, said. This caused nutrients such as phosphorus and nitrogen to run into the lake at higher levels than normal, she said.

Residents of Ithaca reported signs of toxic algal blooms at the end of July and beginning of August, Hillson said. The reports subsided during August as the rain slowed, she said. The blue-green algae raised serious health concerns for people in the area and their pets. If a person was to come into contact with a toxic bloom or swallow water where the bloom was present, they could have symptoms such as vomiting, nausea, diarrhea, a skin rash, eye or throat irritation or breathing difficulties, Hillson said.

Samantha Borisoff, climatologist at the Northeast Regional Climate Center at Cornell University, said the ground was so saturated from the consistent rain that when heavy rain continued throughout the summer, the water ran off the ground instead of soaking in. This increase in nutrients from runoff water spurred algae that is usually dormant in the lake to grow in mass. This creates a major health issue for the southern part of the lake, which is the part near Ithaca, she said.

Dogs and other pets were considered the most at–risk for these health concerns since they could continuously be in contact with the toxic water if it got on their fur, she said. These blooms caused multiple public access points in southern Tompkins County, such as Taughannock Falls State Park, to close until the blooms were no longer a concern to public health. Hillson said toxic algal blooms are not normally a concern in the southern part of the lake, where Tompkins County is located.

Borisoff said Ithaca experienced a change in weather due to the change in the storm pattern. In 2016, the main storm track was north of Tompkins County, causing the rain to miss the area just slightly, she said. The area experienced an extreme drought due to the lack of rain paired with on–average historically warmer temperatures, she said. Tompkins County was in the path of the main storm track this summer, she said, causing it to be wetter than normal.

Jake Brenner, associate professor in the Department of Environmental Studies and Sciences and faculty manager of the Ithaca College Natural Lands, said the timing of precipitation in Ithaca is important to the success of farmers and to the landscape of the region.

“It’s not about the total amount of rain that falls,” Brenner said. “It’s about the time it comes.”

Brenner said the Natural Lands were impacted severely by the increase in rain. The paths stayed muddy and soggy for significantly longer than years past, so stone structures and cement had to be added to maintain the structure of the trails.

In theory, an increase in rainfall aids farmers in their crop season. But the overabundance of rain created another difficult crop season for farmers. Agriculture in central New York was greatly impacted by the drought in 2016. Farmers faced irrigation issues, which led to large amounts of crop loss, Borisoff said. The overabundance of rain also caused crop loss for farmers though. Some farmers could not get plants into the ground because of the oversaturated soil and other plants that were already in the ground got drowned out, she said.

‘It was kind of the Tale of Two Summers,” Borisoff said. “Last year was so dry; this year was so wet. … Unfortunately, they lost crops because of both situations.”

Alex Jackman, owner of Jackman Vineyards in Ithaca, said his farm was focusing on resilience due to these drastic changes in weather. Last summer, his farm saw huge losses in crops and many projects on the young farm came to a standstill, Jackman said. When planning for this year, he took into account the weather when thinking of the best ways to improve the farm, he said.

“It was very fresh in our minds when prioritizing where to allocate our resources,” Jackman said.

The heavy rain caused fewer problems for his farm, Jackman said. His crops, which consist of fruits and fruiting vegetables, tend to be grown all season, so they were not faced with the challenge of not getting plants into the ground, he said.

Although not many crops were lost, the increase in rain did cause an increase in disease pressure in the peaches, he said. This caused large amounts of peach crops to be lost, he said. With the drastic weather changes in this region, farmers have to prepare for the majority of their business to be able to survive multiple challenges rather than just surviving a drought or heavy rainfall, he said.

“You’re constantly facing new challenges, and that is not likely to go away anytime soon,” Jackman said.