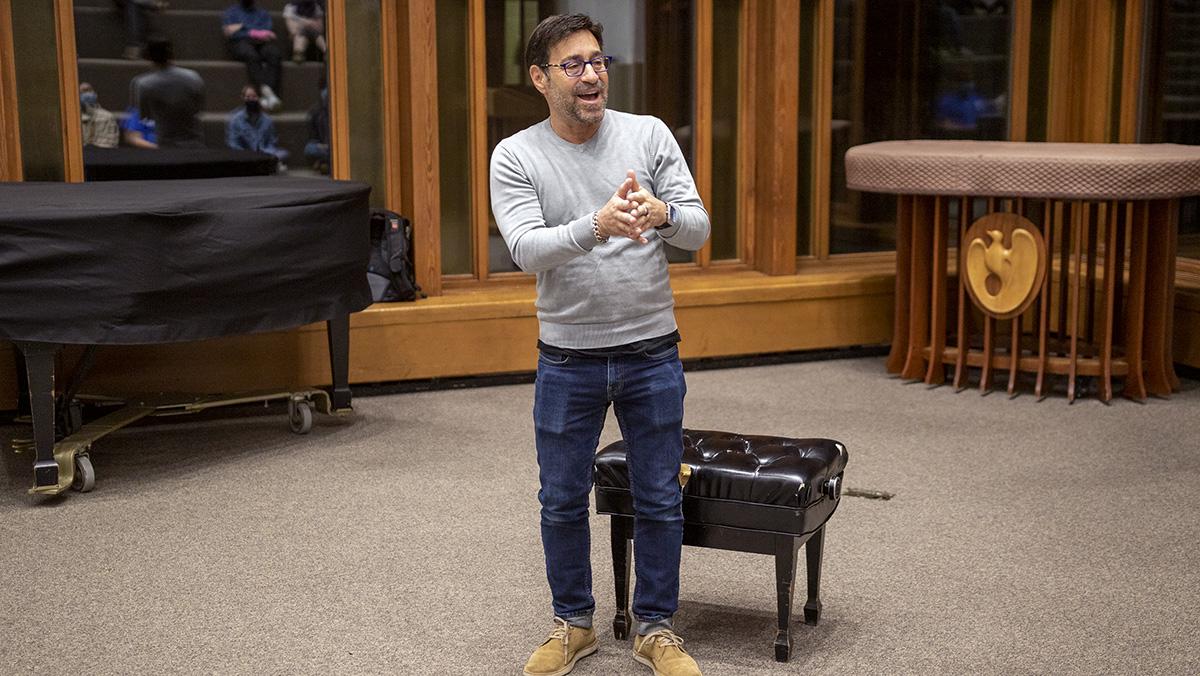 Nolan Saunders/The Ithacan
Scott Fried, an HIV and AIDS activist, said he plans to further speak about his personal experience with HIV, as well as discuss his personal guidelines for surviving life on Nov. 10 and 11. Fried also plans to speak at a talk-back for a preview of RENT, hosted by the Department of Theatre Arts on Nov. 10. Ithaca College Theatre is putting on a production of RENT during the 2021–22 season. The show is running from Nov. 13 to 18.
By Elizabeth Kharabadze — Staff Writer
Published: November 10, 2021

Scott Fried, an HIV and AIDS activist, delivered a powerful message on accepting one’s identity to the Ithaca College community Nov. 9 in the Muller Chapel.

The event, “I Am Enough: Closeted Monologues,” was held in collaboration with Hillel at Ithaca College and the Center for LGBT Education, Outreach and Services. It is the first in a series of educational conversations that take place Nov. 9 through 11 on topics ranging from sexual health, intimacy and self-acceptance. Fried said he plans to further speak about his personal experience with HIV, as well as discuss his personal guidelines for surviving life on Nov. 10 and 11.

Fried also plans to speak at a talk-back for a preview of RENT, hosted by the Department of Theatre Arts on Nov. 10. Ithaca College Theatre is putting on a production of RENT during the 2021–22 season. The show is running from Nov. 13 to 18.

Fried said he saw the story of Jacob and Esau as a symbol of coming out. The story of Jacob and Esau, found in the Torah, describes Jacob, the younger brother, deceiving his father by pretending to be Esau, the older brother, and receiving the firstborn blessing. Fried said the act of being blessed was indicative of being accepted for one’s self — both the good and the bad.

“Every time a father offers a blessing to his son … it’s preceded with the words ‘Who are you that I may bless you,’” Fried said. “The blessing itself is not for land and the cattle and the money and the waves and the name that the father hands over … The blessing itself is the ability to say ‘I am who I am’ and not lie.”

Fried said that many people lie to others about their identity. For Fried, he said he lied when he was younger about being gay and being diagnosed with HIV. He said in many ways he believed it was better to die of AIDS rather than come out as a gay man, since there was not much support for either socially.

“I just didn’t want to be gay,” Fried said. “Way before we sang and danced about coming out and being different … there was no coming out soundtrack for me in my ‘pre-Glee’ world,” Fried said. “There were no heroes, no songs, nobody to look to.”

The AIDS crisis in the United States rose to become the number one threat to public health in the 1980s. The virus had devastating effects on minority communities — namely racial minorities, gay and bisexual men — and resulted in 36.3 million deaths globally since the start of the epidemic.

HIV is a sexually transmitted disease that weakens the body’s immune system and can lead to AIDS, if not treated. There is currently no cure for AIDS, but HIV treatment can help lower the viral load — the amount of HIV in the blood. PEP and PrEP are also medical treatments used to prevent infection from HIV.

Fried said he heard a story from one of his friends about coming out, which he also likens to acceptance. In that story, Fried said a boy wanted to come out to his mother, but was too afraid to. He asked his sister to come out to his mom for him and that if his mother accepted him, she should leave the light on in his bedroom so that he knows he is accepted for who he is. The light, Fried said, was symbolic of acceptance and that everyone experiences acceptance differently — sometimes acceptance is bright like the light and other times acceptance is not as strong, like a dim light.

“So who are we in the story?” Fried asked. “I like to think that we are the boy with a secret and a desire to be who we truly are … We are also … the sister; the ally — the one who stands besides us and says ‘I got your back’ … We are also the mother … making sure that others know they are welcome in our presence.”

Fried said at the end that he encourages this generation to live its whole truth. He said this generation will become the forefathers and foremothers that lead future generations into a period of self-love and self-acceptance, something that begins with the now.

Lauren Goldberg, executive director of Hillel, said she took away many practical life-skills from the event, as well as a general sense of peace and being seen.

“Sometimes it hurts a little because [Fried] pushes on those sore spots, and the parts of us that need the work the most are going to be the most tender,” Goldberg said. “But afterwards you feel a sense of calm, and a re-alignment in your spirit that is a real blessing.”

Goldberg also said she found Fried’s discussion on ways to mitigate the effects of HIV through PEP and PrEP particularly interesting and life-saving.

“I think that Scott’s gift is that he holds a mirror up to you, and allows you to see the best of yourself, and to actualize self-love,” Goldberg said.

Senior Benjamin Goldberg attended the event and said it was enlightening to hear Fried speak about his experiences surrounding HIV and AIDS.

“It was definitely very inviting and supportive,” Goldberg said.

Goldberg also said he thought Fried’s presentation on his journey to self-acceptance provided a good outlook on life.

“It was pretty powerful learning from one man’s experience,” Goldberg said. “It can be transferred onto other people.”

Freshman Elana Chernoff, who also attended, said she enjoyed the event and became emotional listening to Fried’s message of acceptance.

“I think he was a really great speaker who can definitely help people in the LGBT community,” Chernoff said.

Chernoff also said she found Fried and the event to be very validating of one’s feelings and identity.

“His words definitely can validate who you are and remind you of your worth,” Chernoff said. “You know you’re enough.”

Editor’s Note: A previous version of this story referred to Fried as a homosexual male, rather than a gay man.