Hours for student employees could decrease as wages increase 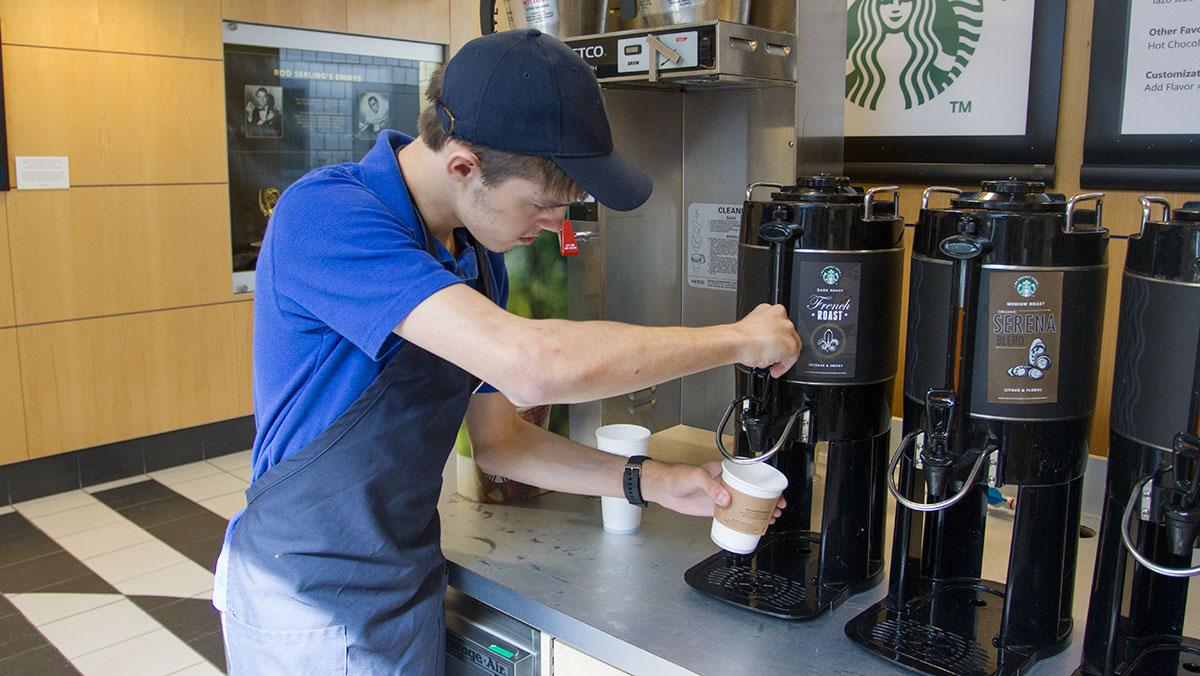 Alexis Liberatore/The ithacan
Ithaca College freshman Sam Quinones works a shift at Sodexo's cafe in the Roy H. Park School of Communications April 5. Due to New York state's increase in minimum wage, this could mean a higher hourly rate but a decrease in hours for many student employees.
By Daniel Hart — Staff Writer
Published: April 26, 2016

The New York state minimum wage increase at the beginning of this year boosted pay from $8.75 to $9, and Gov. Andrew Cuomo has plans to increase the statewide minimum wage to $15 by 2021. For many student employees, that could mean a higher hourly rate but a decrease in hours.

When the first minimum wage increase from $7.25 to $8 at the start of 2014 was announced, Gerald Hector, vice president for finance and administration, said it would significantly help student employees with expenses while not affecting the college’s finances. Since then the statewide minimum wage has increased steadily and is now at $9.

Hector said the college does not yet have a comprehensive plan for how the future minimum wage will be factored into the budget.

“Every time the minimum wage moves, the budget has to be adjusted,” he said. “So the question then becomes, ‘Can we continue to just keep growing that number?’ … ‘Do we need all these jobs?’ That’s a discussion we’re going to have to have.”

Some colleges and universities, including the University of Washington, Columbia University and New York University, have implemented plans to gradually increase the minimum wage to $15 over several years in response to demands made by students.

At NYU, student organization New York University’s Student Labor Action Movement spent the past year protesting for the university to raise its minimum wage to $15 and providing ideas on how the college could afford to do so. On March 24, university President Andrew Hamilton announced a plan to increase the university’s minimum wage to $12 next school year, then to $13.50 the following year and finally to $15 in the 2018–19 school year.

Hector said schools like NYU and Columbia University, with endowments in the billions, compared to the college’s endowment of $289 million, can more easily set aside money for accelerated plans to increase student wages.

“We don’t have that luxury here, so we’re going to have to be dealing with this as the laws are passed,” he said.

Senior Drew Erskine, who works at the Athletics and Events Center, said he does not feel his current wages are enough to significantly help him pay for college. He said his pay has gone from $9.25 to $9.75, well above the minimum wage, but not what Erskine feels is enough to make a dent in his tuition.

“I feel like it’s not really noticeable,” he said. “If I were getting $15 an hour for this … I’d be saving a lot more than I would normally be saving.”

As the minimum wage continues to increase, many students may see a decrease in hours, said Beth Blinn, student employment manager.

“As far as the departments deciding what they do, they have a lump sum of money in their budget,” she said. “What they do with that and how they allocate that out, there may be offices that they have to increase their student wages, so they have to limit the amount of hours a student can work.”

Ben Hogben, manager of access services in the library, said he has reduced the number of students working at the circulation desk during the quietest hours of the day from two students to one to accommodate for the minimum wage increases.

Senior Eddie Dowd, who works at the tech help desk in the library, said he received fewer hours this semester, but the pay increase helped soften the blow. He said he is a proponent of the increase.

“It’s a very modest increase. It’s nothing huge, but we’re happy that we get it,” he said. “It definitely does make a difference, and I got less hours this semester, but because of the increase, my paycheck didn’t get hurt too much.”

Peter Schlough, manager of mail services at the college, said the department employs about 35 students and has little financial room to cut back on hours under the current system for handling mail, which requires many employees to sort and transport mail to all seven mailrooms across campus, including the Phillips Hall Post Office and the Mail Center.

Schlough said he would like to see a central station for all mail on campus, increasing efficiency and decreasing the need for so many employees.

Christy Agnese, school operations and external relations officer for the School of Music, said there will not be cuts to student jobs within the school. Diane Gayeski, dean of the Roy H. Park School of Communications, said she did not anticipate any cutback of student employee hours due to minimum wage increases.

Jeff Scott, general manager for Sodexo at the college, declined to comment on how cuts to student employment hours might affect the dining halls and retail locations.

Freshman Timothy Kaiser, who works at the multimedia desk in the library, said he likes Cuomo’s plan to increase the minimum wage, particularly because he believes it will give student employees pay that is more competitive.

Erskine expressed concern that the proposed increases will be too gradual to compete with inflation. He said he has already seen his rent increase from last year, more or less evening out his increase in pay.

Dowd said he is curious to see how the future changes will affect the state and hopes to see real results.

This article has been updated to correct a misquote.