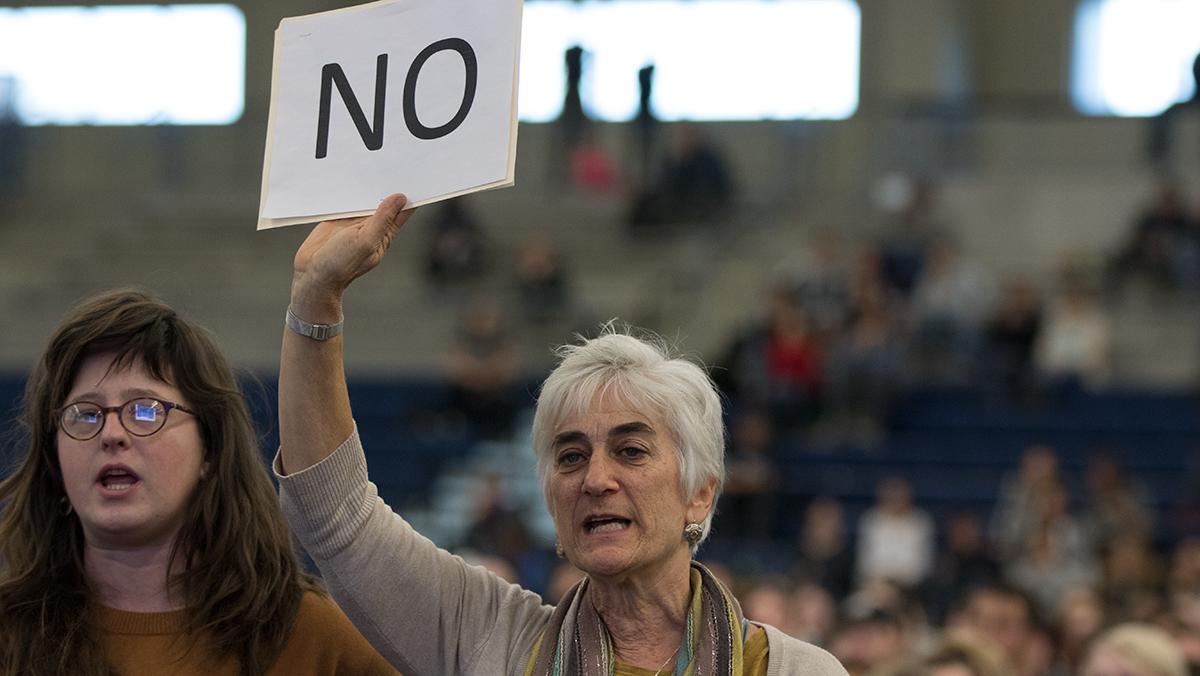 Yana Mazurkevich/The Ithacan
Mara Baldwin, director of the Handwerker Gallery, and Carla Golden, professor in the Department of Women’s and Gender Studies, participate at the Oct. 27 meeting in the Athletics and Events Center.
By Grace Elletson, Kyle Arnold — Staff Writers
Published: November 4, 2015

In the wake of faculty discussions about initiating a vote of no confidence in President Tom Rochon, two out of five schools have voted for recommending Faculty Council conduct a vote, while one has voted against holding such a vote.

Faculty from the Park School voted Nov. 4 in an online poll. Forty-five faculty members voted yes, five voted no and six abstained. Scott Hamula, associate professor and chair of strategic communication and the chair of the school’s steering committee, said he sent the voting link to 84 full- and part-time faculty in the Park School.

“It is to inform our Park School Faculty Council representatives where the Park School faculty stand in response to this issue,” he said.

Mike Mooney, a professor of strategic communication, just started at the college this semester. Following the input of a number of colleagues that explained the situation to him, Mooney voted to go forward with the faculty vote of no confidence online yesterday.

“In talking with my peers and other people in the department, they gave me several reasons why they thought that was a good way to vote, so I listened to them and was influenced by them,” Mooney said.

Hearing protests from outside his window in the Park School, Mooney said the rallies showed that the students “were serious about it,” which also contributed to his vote.

If the vote passes, he said he will most likely vote “no confidence” in President Tom Rochon.

H&S held a closed H&S Faculty Senate meeting Oct. 29 voting in favor of holding a vote of no confidence in Rochon through Faculty Council. They sent a motion to the council requesting a vote, and if it is passed, the vote will be held for all faculty.

Derek Adams, assistant professor in the English department, stressed that although the students and faculty aren’t directly working together, the faculty does show its support for what the students are doing protesting against Rochon and how he’s handling racial tensions on campus.

As the HSHP school prepares for its Thursday meeting, Paul Geisler, associate professor and program director of exercise and sport sciences, said a meeting is important to gauge the pulse of the school.

“I think there’s a lot of curiosity about the issues,” Geisler said. “But I don’t know enough right now to vote no confidence.”

He said he attended the rally on Oct. 21 and was impressed with the students’ passion but doesn’t know if he can use that information to make such a big decision.

“I don’t know how much of what they said was 100 percent true,” Geisler said. “I think he deserves a chance to fix things, but if he can’t then … I don’t know. I just don’t want to vote no confidence and ruin this guy’s career if I don’t know the whole story.”

Patrick McKeon, assistant professor of exercise and sport sciences, said he stands with the students but is unsure how he would vote.

“Without students the faculty is useless,” he said. “I’m very happy that students are speaking up.”

The School of Business decided at a meeting not to request a vote of no confidence from Faculty Council. Warren Schlesinger, associate professor of accounting, said of those who attended the meeting, 16 voted opposed, eight voted in favor and seven abstained.

“There are other ways of addressing racism and cultural bias, but I don’t think a vote of no confidence is in the best interest of the college,” Schlesinger said.

The School of Music does not plan to hold a separate meeting to decide if it will support holding a vote of no confidence, said Deborah Rifkin, associate professor of music theory, history and composition. Instead, it is waiting on the motion initiated by H&S to get to Faculty Council, which will then determine if they do a vote of no confidence.

Correction: Comments made by a faculty member were disputed and have since been removed.