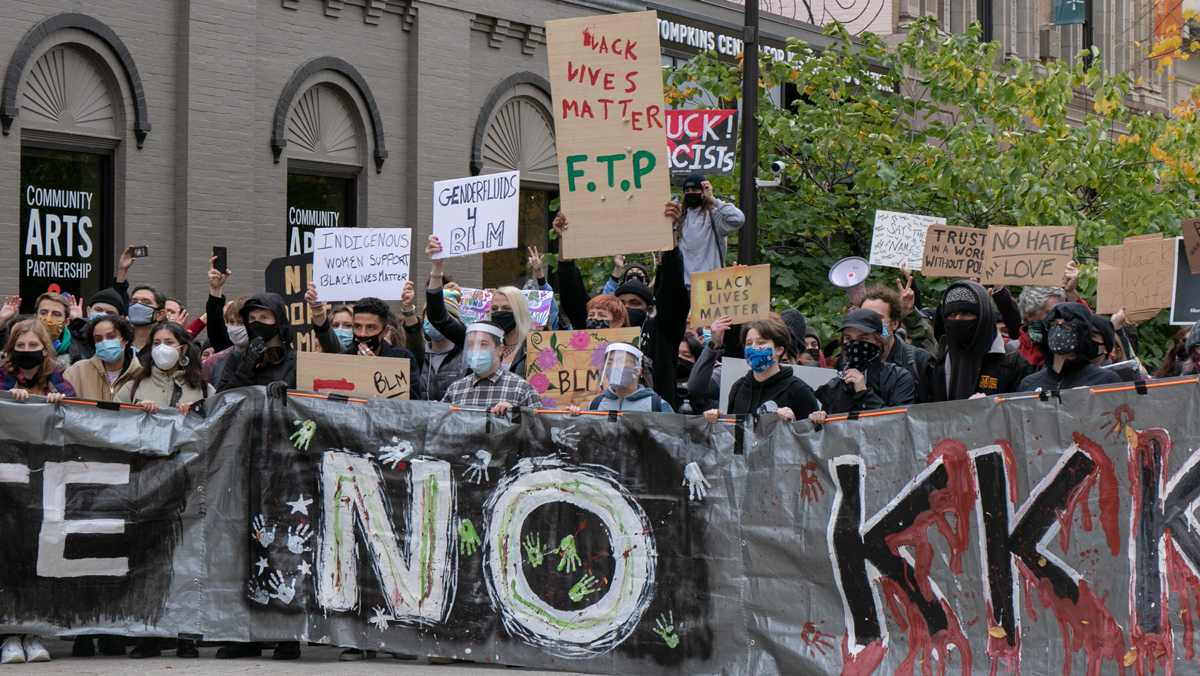 Ash Bailot/The Ithacan
“Whose pavilion? Our pavilion!” and “Black Lives Matter,” rang across the Bernie Milton Pavilion on The Commons in Ithaca on Oct. 24.
By Skylar Eagle — Senior Writer
Published: October 29, 2020

This chant, along with others, like “Whose pavilion? Our pavilion!” and “Black Lives Matter,” rang across the Bernie Milton Pavilion on The Commons in Ithaca. On Oct. 24, the Ithaca Democratic Socialists of America (IDSA) held a “Festival Against Hate” in response to a “Back the Blue” rally, resulting in a tense, but nonviolent, face-off in downtown Ithaca.

The IDSA’s “Festival Against Hate,” held in collaboration with the Ithaca Pantheras, a racial justice advocacy group, protested against “far-right instigators” and the Back the Blue rally. The Back the Blue rally was an event that was held in support of the Ithaca Police Department (IPD). The rally was supposed to be held at the Bernie Milton Pavilion, the same place where Black Lives Matter protests have been held every Sunday for the past four months.

The festival began at approximately noon with counterprotesters, most wearing all black, painting a large banner that said, “No Hate, No KKK, No Fascist USA.” Others mingled and danced to songs like “WAP” by Cardi B and Megan Thee Stallion and “Don’t Stop,” also by Megan Thee Stallion.

At approximately 1 p.m. — an hour before the Back the Blue rally was planned to begin — the completed banner stood as a barrier between the Bernie Milton Pavilion and the rest of The Commons. The protestors brandished wooden and plastic signs that said “Silence Is Violence,” and “It Is Our Duty To Fight for Our Freedom” as shields. They chanted, “You can’t stop the revolution.”

Russell Rickford, associate professor of history at Cornell University, spoke to the crowd of counterprotesters about how to achieve their goals of defunding the police. 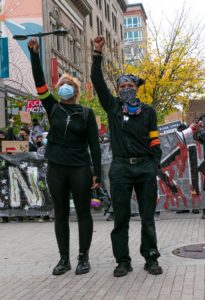 “Capitalism has accelerated its assault on working people,” Rickford said. “It has built up a massive police apparatus in order to protect the interests of the ruling class from working people and from poor people.”

The concept of defunding the police refers to cutting the money that the governments spend on law enforcement and reallocating that money to more services like job training, counseling and violence-prevention programs, according to the American Civil Liberties Union (ACLU). Every year, state and local governments spend upward of $100 billion on law enforcement, also according to the ACLU. At least 13 cities are defunding their police departments, according to Forbes.

In Ithaca, Mayor Svante Myrick has assembled a Reinvent Public Safety Task Force to reform the IPD, and the IPD has been giving presentations on police reform.

The proposed City of Ithaca 2021 budget has a budget of $12,418,616 for the IPD, down approximately 2.8% from the department’s $12,775,722 budget in the 2020 amended budget. Myrick said that eight police officer positions will be defunded in this budget. The City of Ithaca Common Council is set to approve the budget Oct. 29.

At around 1 p.m., supporters of the Back the Blue rally started gathering on the corner of East State Street and North Cayuga Street. Some wore “Make America Great Again” hats and waved American flags, flags supporting President Donald Trump and the “Blue Lives Matter” symbol, a black and white American flag with a single blue stripe. 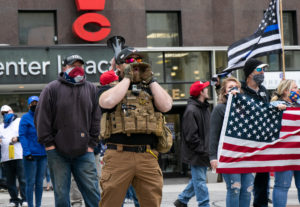 Approximately 50 people attended the Back the Blue rally, including at least one member of the Upstate New York Proud Boys Chapter — a far-right, male-only organization. Though they insist they are not a part of the “alt-right,” members of the Proud Boys attended the “Unite the Right” rally — a well–known white nationalist rally — in Charlottesville, Virginia, in 2017.

Rocco Lucente, organizer of the Back the Blue event, spoke to the crowd, calling the counterprotesters a “vicious mob of terrorists.”

Ithaca and Tompkins County are known for their local activism and liberal population. During the 2019 election, Myrick, a Democrat, was elected for a third term as mayor. All of the alderpersons are also Democrats.

“We decided to keep it off of the pavilion as a display of our good faith in that regard,” he said.

However, at 2:45 p.m. Lucente and members of the Back the Blue rally began marching toward the pavilion to face a crowd of at least 250 counterprotesters.

The groups exchanged chants for over an hour, the counterprotesters chanting, “Fascists, go home!” with some members of the Back the Blue rally responding “We are home.” There was an increased presence from law enforcement including the IPD, New York State Police and the Tompkins County Sheriff’s Office standing nearby. 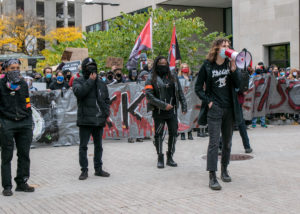 “As the leaders of local government and law enforcement, we all feel that tempers are quickly spiraling out of control,” the letter said. “We implore our community to please work to find other outlets for political expression and help us avoid a potentially tragic clash in the heart of our city.”

A rally in support of Trump Oct. 16 became violent. On Oct. 22, six arrests were made after a group of protesters gathered in front of the IPD station in response to the arrest of Ithaca community member Messia Saunders during a press conference held by Reed, outside the Tompkins County Republican Committee Headquarters in Ithaca.

Recently, businesses and homes in downtown Ithaca have been vandalized with racist and anti-Semitic graffiti. On the night of Oct. 25, Moosewood Restaurant and Sunny Days of Ithaca were covered with anti-Semitic graffiti and posters that mocked Black and Jewish people, according to the Ithaca Voice.

Myrick tweeted that his office and the homes and offices of Jewish Ithacans have been targeted as well. He said that the IPD has made finding the vandal its top priority.

Ithaca College senior Carly Hough was at the Oct. 22 protest and said that they felt scared when police began arresting protesters after declaring the gathering an unlawful assembly.

“Basically a troop of like 20 police officers came down the hill told us it was now a nonsanctioned gathering and didn’t even give us 30 seconds to disperse before they just started yanking people off each other, assaulting people,” Hough said.

Tension between the Ithaca community and the IPD is not new. In 2019, the police department faced criticism for its handling of an incident on The Commons involving Cadji Ferguson and Rose DeGroat, sparking multiple Black Lives Matter protests. DeGroat was initially charged with felony second-degree attempted assault, resisting arrest and obstructing governmental administration until charges against her were dropped. Ferguson was found not guilty of disorderly conduct.

“I’d like to see Svante actually condemn the police violence and condemn these situations and not just hang in the middle and be noncommittal,” Hough said.

Lucente said the purpose of the event was to support the IPD.

“We want to let them know that not everybody buys into the notion that the police are a systemically racist problem in our society,” Lucente said. “We are here to say that, without them, there is no law, and, without law and order, our society will degenerate into chaos.”

Osborne said the sheriff’s office worked with the IPD to keep people safe. He said he was satisfied with the outcome of the rallies.

“We’re not here to take sides,” Osborne said. “We’re here to just protect the safety of everybody involved.”

A representative of the Ithaca Pantheras, who preferred not to be named, said they did not have any concerns about possible violence.

“We’re here today because we are trying to essentially defend our community from threats from outside of our community,” the representative said. “The leader of this so-called Back the Blue rally, which is in essence a Trump rally, doesn’t even live in Tompkins County.”

Cheri Valentine, an Ithaca resident, said she showed up to the Back the Blue rally because she was raised by law enforcement officers and is tired of seeing them disrespected by members of the community.

“They’re my family, and I’m sick of it,” Valentine said. “There are bad apples in every profession, but I don’t want to see them get hurt and not be able to do their jobs.”

Valentine also acknowledged that police officers need better training to deal with situations in which mental health might come into play. As for the demonstrations, Valentine said she wanted things to remain civil.

“I want there to be peace,” Valentine said. “I’m not racist.”

At the Oct. 24 rallies, the Back the Blue supporters began to clear out after 5 p.m., while the counterprotesters celebrated by dancing to “Cupid Shuffle” and the “Cha Cha Slide.”

The representative from the Ithaca Pantheras said she was inspired by the turnout at the counterprotest.

“As a Black woman, an immigrant, somebody who inhabits just about every minority position that you can possibly have in this country, to see people come out and incredible numbers, it makes you feel 100% more safe,” the representative said.