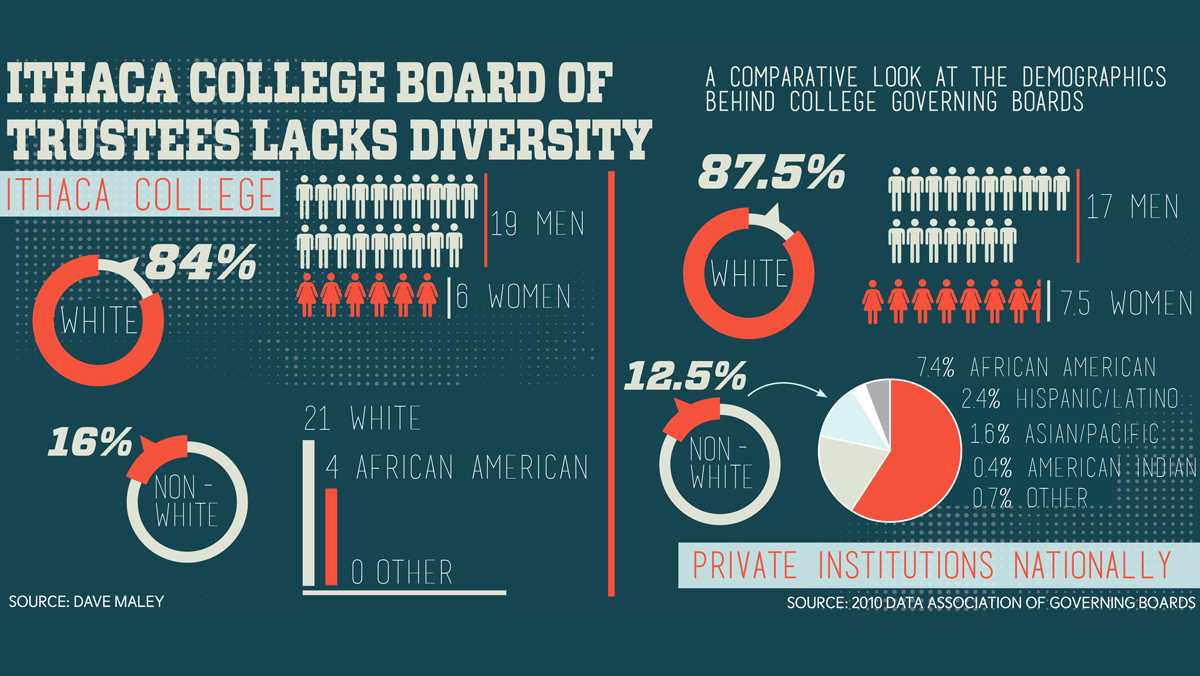 As Ithaca College welcomes President Shirley M. Collado, the first woman of color to hold the position, it will also be welcoming seven new Ithaca College Board of Trustee members. Six of the seven new board members are white men — an identity that is already predominantly represented on the board.

Out of the seven new board members — Michael Conover ’81, Jack Dembow ’77, Dave Fleisher ’91, Gary Gross ’81, William Nelligan ’83, Jeff Selingo ’95, James Taylor ’00 — only one is a man of color. Out of the 25 members on the board, 16 are white men, five are white women, three are men of color, and there is one woman of color. That means approximately 64 percent of the board is made up of white men and 84 percent of the board is white. The college’s lack of diversity on its board is reflective of other institutions across the country which face the same issue.

Trustee members are elected for an initial term of four years and can be re-elected for up to two additional three-year terms. Following the completion of their first three terms, members have to rotate off the board for at least one year until they can be re-elected for another term. The new members began their appointments in May. And while the board is lacking in gender and racial diversity, some are members of the LGBTQ community.

Trustees are expected to strengthen the college financially through investment planning and expected to donate personally to the college. They are also charged with managing the overall long-term stability and growth for the college, according to the college’s website.

James Nolan ’77, chair of the Governance Committee on the Board of Trustees, is charged with finding, vetting and interviewing potential new members. He said this process takes time and that it often takes years to develop relationships with candidates before inviting them to join the board.

“We go through a process to find individuals who have both the qualifications, the desire, the interest to participate with us on the board,” Nolan said. “It could take upwards of one to three years to cultivate a relationship with an individual to ask them to become a trustee.”

This is why, Nolan said, it is taking the board longer to diversify its membership.

In a paper titled “Diversifying the Board — A Step Toward Better Governance,” Eric Leung, lecturer at The Chinese University of Hong Kong Business School, outlines why homogenous boards can be problematic. It highlights “groupthink,” the practice of minimizing conflicts and reaching a consensus decision without evaluating alternative ideas, as a major issue among boards lacking diversity.

“Combining contributions of a group of people with different skills, backgrounds and experiences is assumed to be able to approach problems from a greater range of perspectives, to raise challenging questions and to debate more vigorously within top management groups,” the report states.

Some faculty do not believe that it could have been difficult to find at least one woman, or woman of color, to join the new membership. Vivian Conger, associate professor in the Department of History, said she thought it was “horrible” that the board could not manage to diversify more.

“I think it sends a bad signal and … frankly, I just can’t imagine they could not find qualified women to serve on the board of trustees,” Conger said.

Barbara Adams, associate professor in the Department of Writing, said she was also distraught by the board’s lack of gender and racial diversity.

“It’s unfortunate there’s not a more diverse representation of ethnicity and gender that reflects both our campus community and our society,” Adams said.

Nolan said the selection process for potential board members depends on what the college’s needs are at a given point in its history. He said during this past selection process, the board was looking for people with backgrounds in investing and those who have extensive knowledge about higher education. For example, Conover, Fleisher and Nelligan all have backgrounds in finance and Selingo used to be the top editor for The Chronicle of Higher Education and has written three books focusing on major topics in higher education.

Alvin Schexnider is a senior fellow for the Association of Governing Boards of Universities and Colleges, an organization focused on governance in higher education. He said while it is a lengthy process to find the right trustee who is dedicated enough to fill the position, diversifying a college’s board needs to be an intentional goal for trustee leadership.

Ellen Chaffee, also a senior fellow for the Association of Governing Boards, said there are multiple ways for boards to be more intentional in finding diverse board members. She recommended that boards go outside of their ordinary networking zones to find more diverse candidates.

“Network beyond your traditional sources,” Chaffee said. “They can go to places they haven’t been before, whether it be service clubs or hospitals or non-profits and organizations that help people in the area … to network.”

In Leung’s report on how to bring more diversity to a governing board, he recommends employing quotas to increase specific representation for women and marginalized groups.

Junior Carlie McClinsey, president of the Student Governance Council, said she thinks the disparity in diversity is consequential to the systemic inequalities that exist in the country. She said that because women and women of color are often paid less than men are for the same work, they might not be able to take on an unpaid position as a board member that requires frequent trips to the college and a large time commitment.

“It is a lot harder for women, especially if they have kids, to devote that much time to IC,” McClinsey said. “It’s a lot harder when your finances aren’t as strong as a lot of the white men in America.”

Despite these issues, McClinsey said she hopes the board will work to correct the lack of gender and racial diversity. 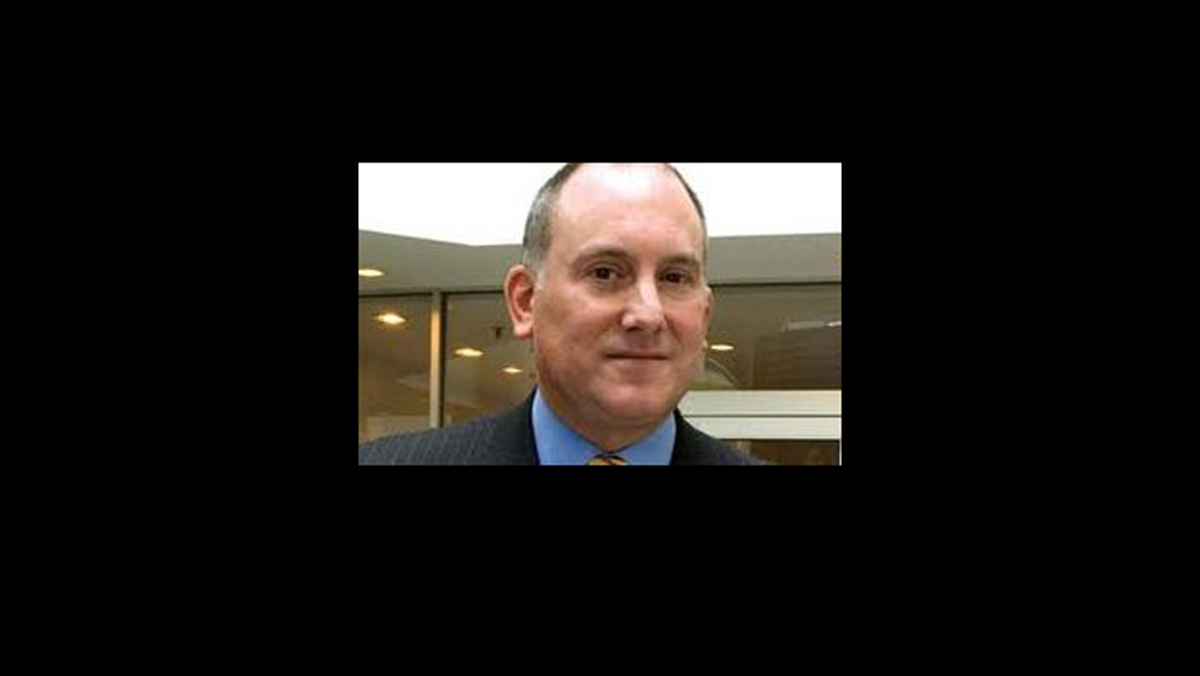 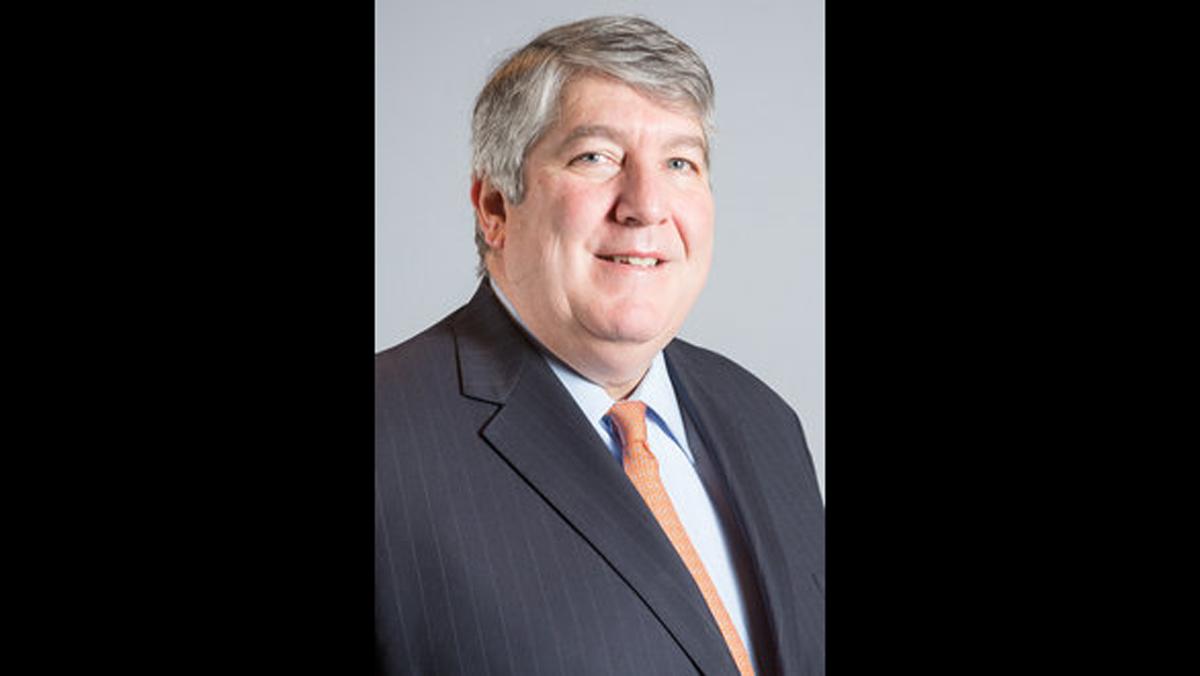 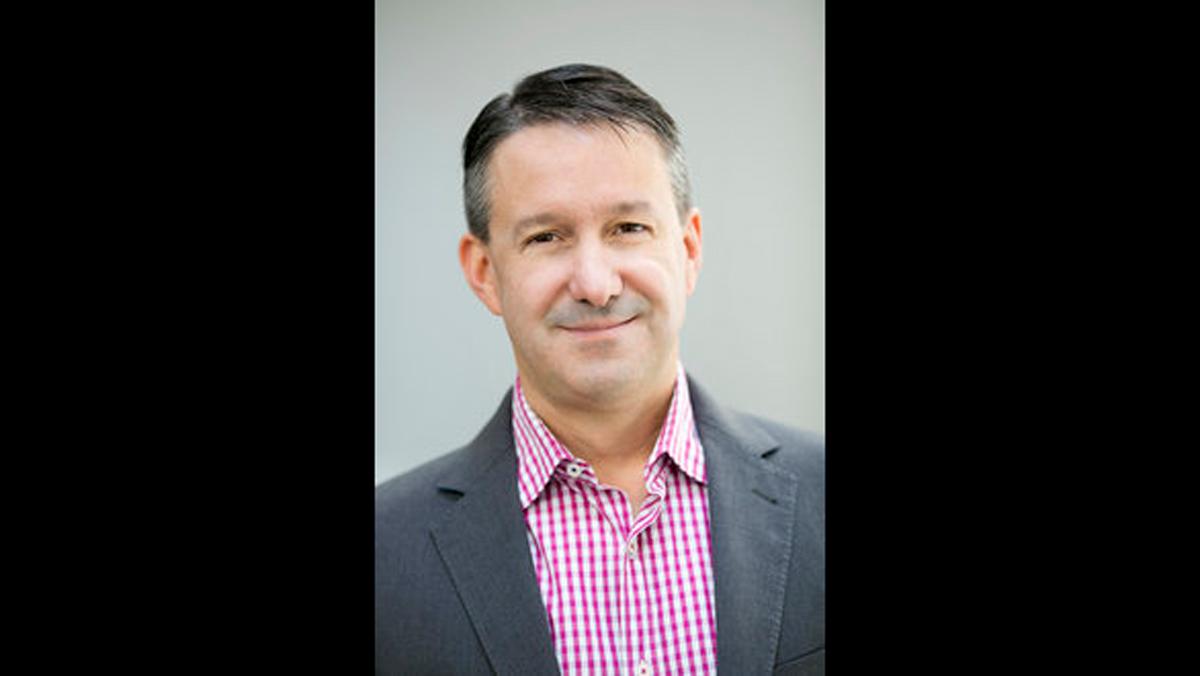 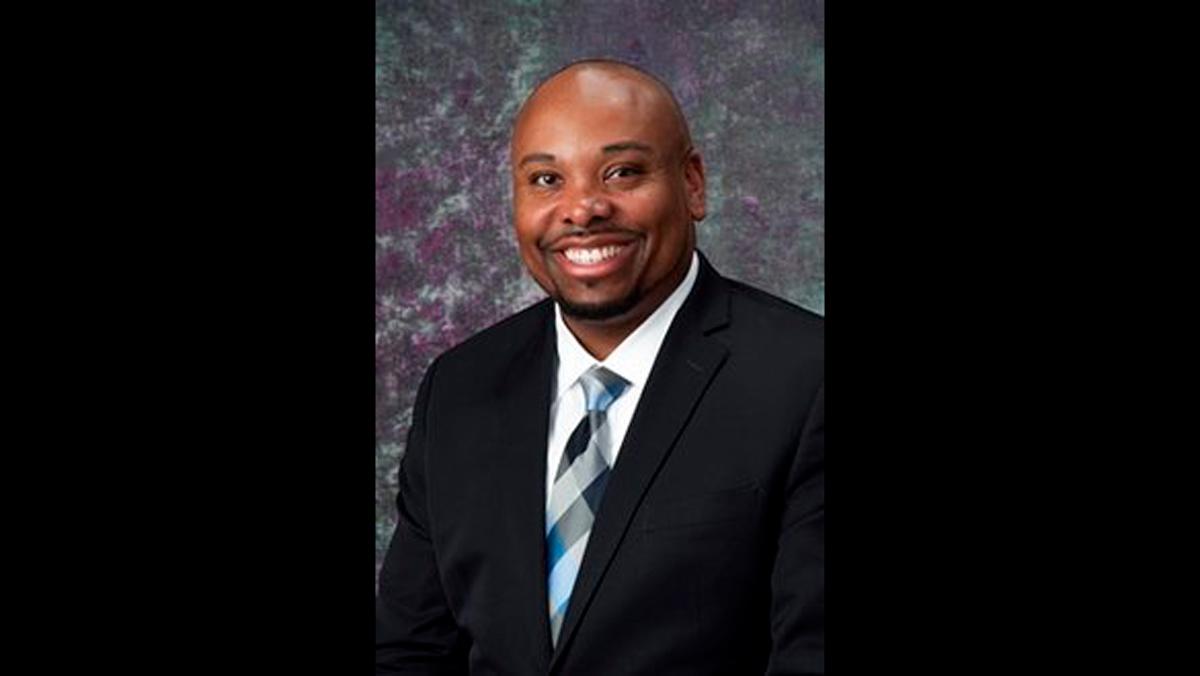 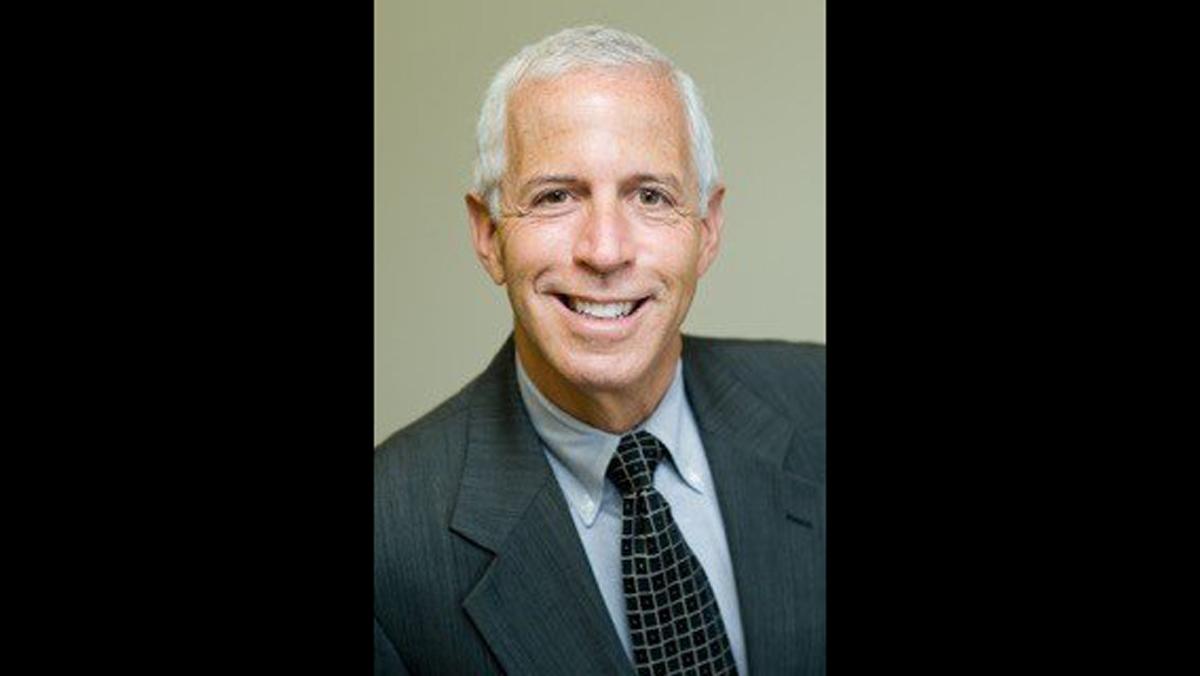 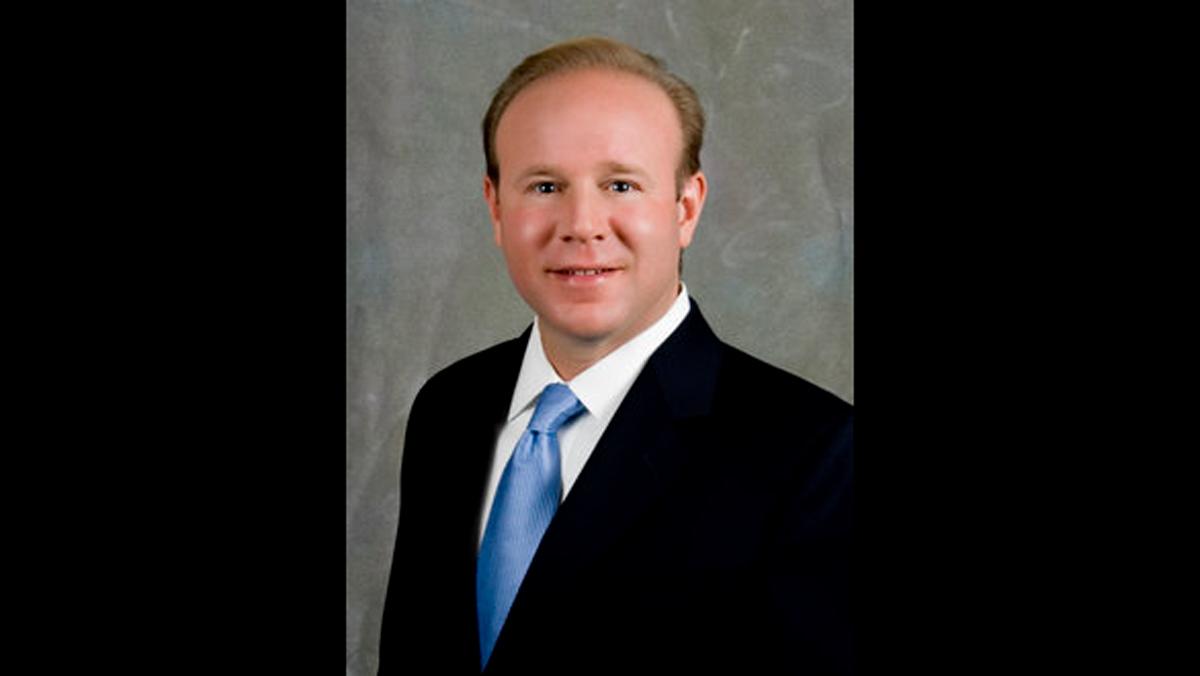 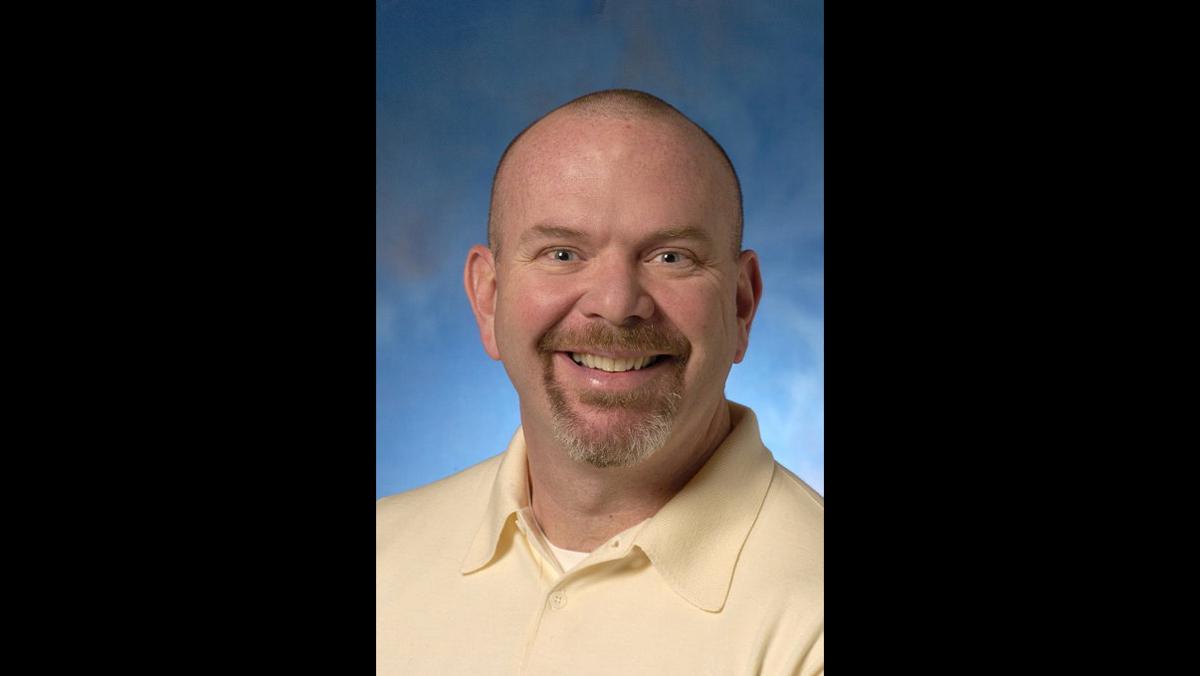 <
►
>
Dave Fleisher ’91 had previously chaired the Buildings and Grounds Committee when the college was planning and building the Dorothy D. and Roy H. Park Center for Business and Sustainable Enterprise, the Peggy Ryan Williams Center and the Athletics and Events Center. He is currently CEO of the wealth management firm Firstrust Financial Resources and vice chairman of Karr Barth Associates, Inc., a financial services firm. Also, he was previously a trustee from 2004 to 2014.

The Ithaca College Board of Trustees decided on which professors would receive tenure, promotion and emeritus status at its February meeting in New York City.

Board of Trustees approves tenure statuses

Board of Trustees makes statement about Rochon and campus climate

Board of Trustees throws celebration to honor IC 20/20 plan