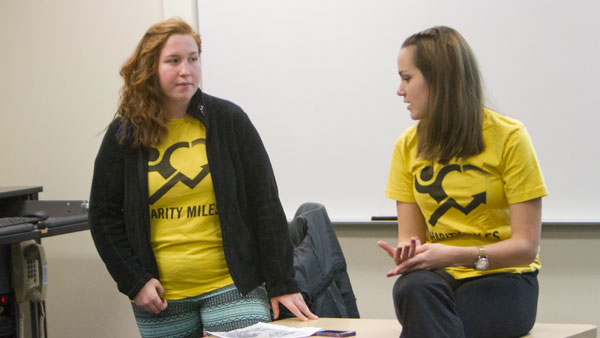 While scrolling through her smartphone, avid runner and junior occupational therapy major Kelly Pettigrew came across an app called Charity Miles, which allows users to donate money while exercising.

Pettigrew said she shared the newfound app with her friend junior Rachel Gray, a clinical health studies major whose hobby is running.

“I just really want to motivate people to get out there and not only help yourself, but help others,” Pettigrew said.

The two got together and discussed the possibilities for incorporating the app into campus life by talking to Charity Miles representatives and the Office of Student Engagement and Multicultural Affairs, Pettigrew said. Now, Gray and Pettigrew are working to spread the word, and the generosity, through IC Charity Miles, their new club at Ithaca College.

“I love donating money and I love running, so it was a perfect thing for me to do,” Gray said.

Gray said IC Charity Miles is not an “exercise club group” but an organization focused on spreading the word about the application. Organized in the fall of 2013, Pettigrew said they wanted to wait until the spring organization fair before becoming officially registered with OSEMA.

An Android and iPhone application, Charity Miles allows users to track each mile of walking, running and biking activity through the phone’s GPS system. However, the app does not yet have capabilities for tracking indoor exercises that do not require moving a physical distance, such as pedaling on a stationary bike.

Users raise 10 cents for every mile biked and 25 cents for each mile ran or walked, according to the Charity Miles website. Corporate sponsors of the app have funded the first $1 million raised by participants to be donated to charities such as Autism Speaks and the Michael J. Fox Foundation.

Bryan Roberts, associate dean to the Roy H. Park School of Communications and affiliate to the Michael J. Fox Foundation, said the app promotes both exercise and charitable giving.

“I just know through the Fox Foundation that exercise is key,” he said. “Exercise is the only thing that’s shown to slow Parkinson’s Disease, so [the app] makes perfect sense.”

Gene Gurkoff, founder of Charity Miles, said the app is largely self-sponsored because it wants to grow the audience and attract sponsors.

“We’re still self-sponsoring the app a bit, but we now have great sponsors like Timex, Humana and Lifeway Foods who are generously supporting us,” he said.

Gray said as a club, IC Charity Miles works to utilize the app through word of mouth and fundraisers that allow people to get together and have weekly runs, which will begin later this spring. She said the group works toward a 5,000-meter run each semester.

Gurkoff said he expects to expand the number of charities within the coming months.

“We currently have 26 high-impact charity partners,” Gurkoff said. “We’re adding slowly as we grow. And we have several amazing charities that we’ll be adding in the coming months.”

National organizations offered to users include Stand Up to Cancer, the American Society for the Prevention of Cruelty to Animals, Feeding America and Habitat for Humanity, according to the Charity Miles website.

“We are really looking to collaborate with a lot of other clubs on campus,” Gray said. “We kind of want to reach out to them because it’s a good way to kind of get out of that formal club meeting and kind of do something with your club members.”

Meredith Sager, co-president and founder of IC Autism Awareness, said Charity Miles is a great way to raise funds and awareness for causes that need money for research and family support.

“It’s also a great way to get people thinking about autism and realizing that it’s a cause that needs support,” she said.

“I use it when I am walking around campus every day to easily help further causes that are important to me,” she said. “It is really easy to use and totally worth the few seconds it takes to switch on every day.”

Junior Natalie Lang, who is a member of IC Charity Miles, said she looks forward to working with other groups who are interested in the charities that are listed on the app. She said getting more students involved would be really great.

“It’s so easy to use, so it’s a really great way to help someone out just when you are doing something like running,” Lang said.

Lang said the club meets at 7 p.m. on Tuesdays in Friends Hall, and its meetings are open to all students and the races are not exclusive to group members.

“Our meetings are open to anyone interested,” Gray said. “One can use the Charity Miles app simply by downloading it on their phone.”

Gurkoff said he is excited to see how Gray and Pettigrew take Charity Miles to the next level in Ithaca.

“I love what Rachel and Kelly are doing,” he said. “This is really what Charity Miles is all about — empowering people to step up and make a difference.”