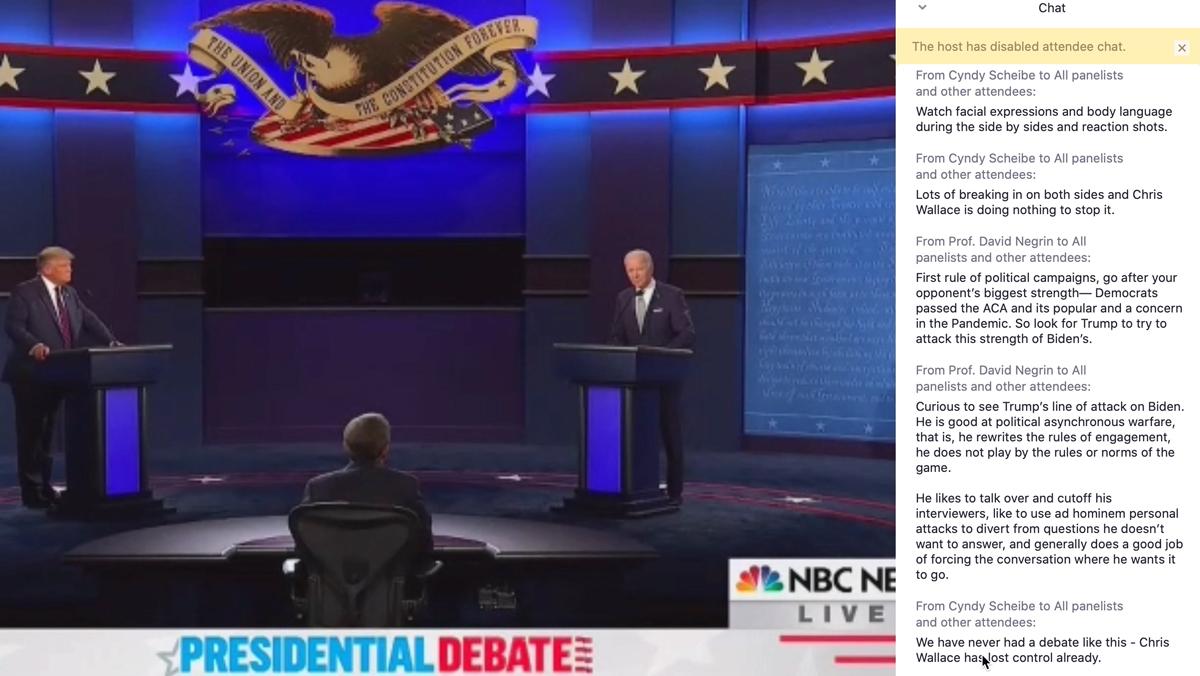 Courtesy of NBC and Ithaca College
A panel of media literacy and communication experts from the college, including Cyndy Scheibe, professor in the Department of Psychology and founder and executive director of Project Look Sharp; Chris Sperry, director of curriculum and staff development for Project Look Sharp; and David Negrin, assistant professor in the Department of Media Arts, Sciences and Studies, provided commentary of the candidates’ performances.
By Alyshia Korba — Assistant News Editor
Published: October 2, 2020

Even though members of the Ithaca College community are spread across the country during the 2020 election cycle, students and faculty are staying engaged with Zoom watch parties for the presidential debates.

The debate between President Donald Trump and Democratic presidential nominee and former vice president Joe Biden was held in Cleveland and moderated by Fox News anchor Chris Wallace. Wallace notably was unable to maintain control over the two candidates, with Trump and Biden often interrupting each other throughout the debate.

The watch party included comments from the panelists before and after the debate, as well as commentary during the debate with Zoom’s chat feature. Approximately 50 people watched the livestream, said Ari Kissiloff, assistant professor in the Department of Strategic Communication, who organized the event.

The panelists discussed debate techniques and provided political context and analysis on how the candidates’ behaviors would affect voters’ decisions.

“I suspect that Trump’s performance has buoyed his base who likely applauded his aggression and interrupting/bullying,” Sperry wrote. “But I can’t see where he likely convinced undecided voters. I suspect that Biden has met expectations of not getting thrown off his feet. He showed the ability to quote statistics, stay on theme. And one did not get hooked by Trump’s attacks.”

Several of the panelists noted that the debate was chaotic because of the two candidates ignoring the time allotment for each question. After the debate, the Commission on Presidential Debates said it is planning to make changes to the upcoming debates, like cutting Trump’s and Biden’s microphones if they break the rules, according to CBS News. Trump said Oct. 1 that he is opposed to changing the rules.

“It often just seemed like second-grade boys arguing,” Scheibe said. “It seemed very different than any other debate I’ve seen just in terms of the amount of name-calling and the amount of out–of–control interrupting.”

Both candidates resorted to ad hominem attacks during the debate. During one of the repeated instances of interruptions, Biden said to Trump, “Will you shut up, man?” Biden also referred to Trump as a “clown” and a “fool,” while Trump insulted Biden’s intelligence and criticized his son, Hunter Biden, for having a cocaine addiction. As CNN host Jake Tapper said, “That was a hot mess inside a dumpster fire inside a train wreck.”

Schiebe summed up her feelings at the end of the debate with a final chat message, “God help us all.”

Sophomore Lucy Calderon, president of IC Democrats, said approximately 40 people attended the watch party, exceeding her expectations for the virtual event. Calderon said she and the other organizers decided to work with EPIC and Premium Blend to get more students engaged in the election.

“Politics isn’t for politicians,” Calderon said. “It’s for everyday people, so we’re thinking ‘How can we engage as many people as we can in the Ithaca community, and how many different groups of people and to make them feel like they really have a part and a voice in this?’ I think it’s a really cool way to give other leaders on campus a chance to shine in politics and engage people in their community.”

Calderon said that for future debates, IC Votes will be asking other nonpolitical organizations to host watch parties, including sports clubs and BomberTHON.

Senior Michael Deviney, president of IC Republicans, said he thinks these watch parties are a good way for students to learn about the candidates.

“It’s probably one of the most important debates in history,” Deviney said. “These debates determine the election leading up to the next four years of our lives, so it’s important to pay attention to such current events.”

Calderon said that she went into the debate with an open mind and thought Biden did well, despite the disorder.

“I thought it was kind of a mess, like a major mess, and I wasn’t expecting it, and it just kind of looked like watching reality TV,” Calderon said. “At the same time, I think it gave everybody a really good sense of who the candidates are and how they handled themselves, and I honestly thought that Biden did a pretty good job.”

Deviney said he was disappointed in both candidates’ performances.

“I thought both sides could have done better,” he said. “We hoped [Trump] would stay on topic more and focus on the economy and jobs where he does have a successful record in.”

IC students have less diverse political opinions than prior years