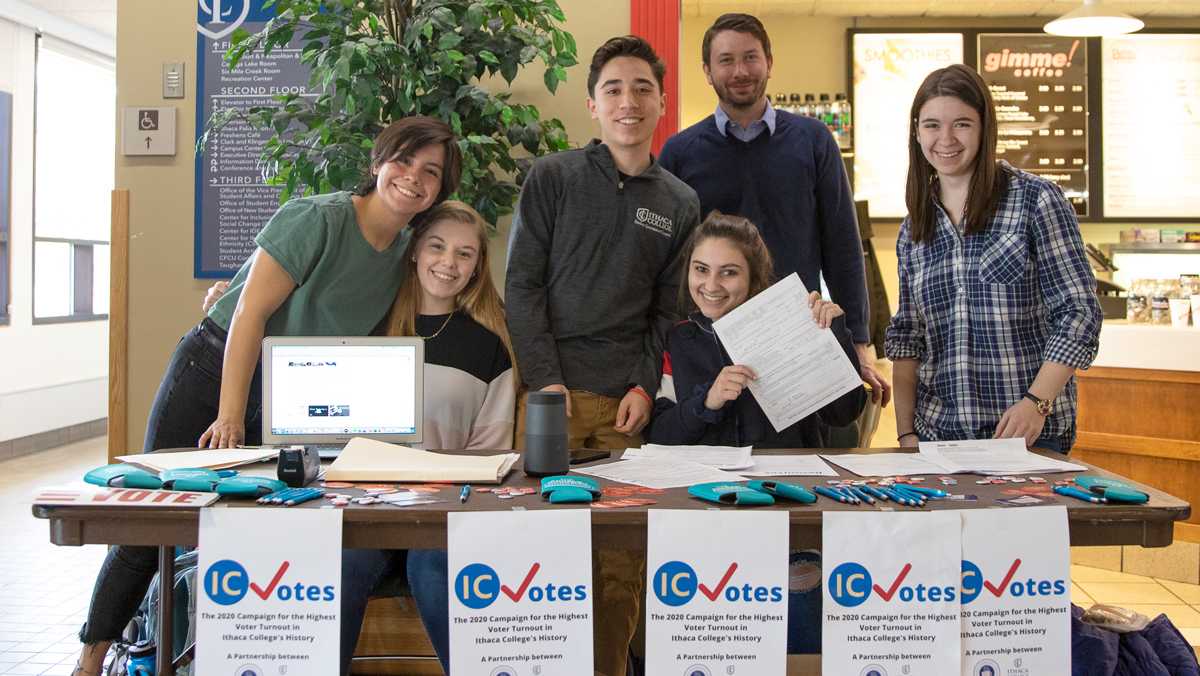 Lucas Cavanaugh/The Ithacan
IC Votes is a new initiative at Ithaca College that works to get members of the college community to register to vote and to help fill out absentee ballots. The initiative began March 2 and will continue until the general election in November.
By Sam Haut — Senior Writer
Published: March 4, 2020

Outside of the Campus Center Cafe, junior Elijah Nishiura stood by a table covered with pens, buttons and stickers with phrases about voting on them. Nishiura, who is a founder of IC Votes, asked everyone who passes by, “Are you registered to vote?”

IC Votes is a new initiative at Ithaca College that works to get members of the college community to register to vote and to help fill out absentee ballots. The initiative began March 2 and will continue until the general election in November. Nishiura and other IC Votes ambassadors will table in buildings, including the James J. Whalen Center for Music and the Park Center for Business and Sustainable Enterprise, to encourage students to vote.

Nishiura said the point of the initiative is to get as many people to vote as possible while not telling students which candidate to vote for.

“We also want to focus on the education aspect of making sure students know about the issues,” Nishiura said. “Not telling them where to stand, but just trying to give them some information about, you know, this is going to be a pretty monumental election in 2020 so there’s going to be some new information.”

Bushby said they hope to expand later this semester to work with the groups to broaden the scope of what the initiative will accomplish by educating people on different candidates.

Freshman Danka Hlinka said the reason she was filling out an absentee ballot was because a professor said it is important to vote.

Hlinka said she has had bad experiences in a male–dominated work environment, so she is passionate about issues surrounding women’s rights.

“I was actually in a workplace where it was heavily male populated, and I never thought that it would be as hard as it was,” Hlinka said. “I just assumed all these women are going through the same thing. But actually having the experience of literally being the only female in my workplace was very hard. So I just want to make sure that either there’s more awareness for women to be able to go into specific fields and not be the only one. Advocate for more women in specific fields, or just that they get paid the same.”

Senior Lauren Suna said she thinks an initiative like IC Votes is important because it makes it easier for people to exercise their right to vote and navigate a confusing system.

“It gets people to actually go out and do our constitutional right to vote,” Suna said. “People often have an opinion on things but then don’t know their power to do anything. The system is really confusing so having something like this that encourages people to go out and vote is really empowering.”

Suna said health care and climate change are important issues to her because they have had an impact on her, and she thinks they are serious issues that need to be addressed.

“When it comes to health care, I had a scare once where my student health insurance wasn’t renewed, and I went to go pick up my prescription, and it was way more expensive than I originally thought,” Suna said. “When it comes to the environment, climate change is a thing, and I would love a government or a president who actually recognizes that climate change is real, and it’s happening. It’s a very imminent threat that we face.”

Sophomore Olivia Notaro said she thinks it is important for an initiative like IC Votes to exist because it gets people from a variety of places to vote.

“I think it’s really important for people to be able to put in their piece, especially on a college campus where we’re not necessarily all from the same county,” Notaro said. “And so our votes are coming from a lot of different places.