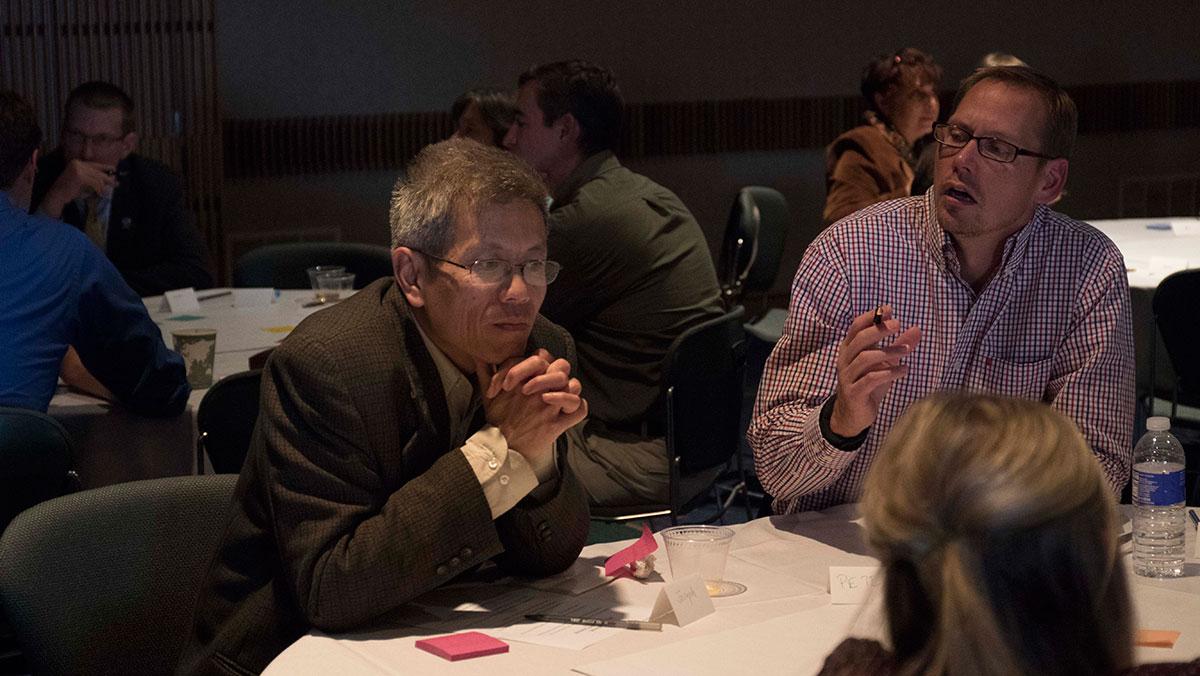 Almost a month after the Blue Sky initiative held its kickoff, faculty in the School of Humanities and Sciences are still confused about what the initiative is. Faculty said they feel comments at the Blue Sky Reimaging Kick-Off event devalued classroom learning and misportrayed how students at the college are currently taught.

H&S was the first school in which faculty voted to support conducting a vote of no confidence following faculty members’ expressing their concerns about the initiative as well as the racial climate on campus.

The Blue Sky initiative was announced in March to reimagine the college’s academic focus, while also maintaining economic sustainability. In a Q&A given last year about the initiative, President Tom Rochon said the initiative aims to make the college a more immersive residential campus.

In the Q&A, Rochon stressed the initiative is not evaluating what the school is doing wrong, but rather creating a vision for the future.

“It would start from the ideal. What would be the best immersive learning community that we could possibly imagine?” Rochon said in March.

The initiative was put on hold by the college at the “Addressing Community Action on Racism and Cultural Bias” event in order for the college to focus resources on improving the campus climate for diversity and inclusion. Rochon said it hasn’t been determined when the college will resume the initiative.

Bob Sullivan, an associate professor in the Department of Communication Studies, said the idea of preparing Ithaca College for the future is not a bad idea, but he is confused because immersive learning is found throughout the college.

He defines immersive learning as experiential learning, and he referenced many different instances of immersive learning already happening on campus. He pointed to research that sophomore-year psychology students are doing, the multiple internships the college provides students and the abundance of study abroad opportunities.

“I think many faculty felt extreme frustration at the college’s seeming lack of recognition of what we’re already doing,” Sullivan said.

Matt Klemm, associate professor in the Department of History, said he thought the term “immersive learning” was vague.

Sergio Cabrera, assistant professor in the Department of Sociology, agreed.

Rachel Paparone, assistant professor in the Department of Modern Languages and Literature, said she thinks it’s always helpful to assess where a college is headed, but she also thinks the theme of immersive learning for the initiative could be taking away from liberal arts classes.

“There’s a lot of value of what we do in the classroom, and I don’t really know how you can go away from what you do in a liberal arts classroom and still be a liberal arts school,” Paparone said.

Paparone said she was also confused by the intention of the Blue Sky initiative because, as she’s heard from other faculty, people are talking about moving toward job-training efforts.

“It’s good because you have to think about what you’ll be doing after you leave school, to be practical, but at the same time, the liberal arts classroom adds a lot of value to whatever you’re going to be doing once you finish at Ithaca,” Paparone said.

She explained that in order to be successful in real-world jobs like proposing business deals, students also need the liberal arts background education. She is going to teach a business French class next semester that allows students to understand French culture to help in doing international business.

“It’s very important to know the principles of business, but if you’re doing international business you have to understand the cultural aspect, otherwise you might not get the business deal,” Paparone said.

Sullivan agreed, saying he thinks the combination of a liberal arts education and the opportunity to apply it in an immersive learning experience equals full understanding.

“Immersive learning is predicated by your mastery of a subject matter … you learn how to do something and then you can immerse [yourself] in it,” Sullivan said.

He referred to a student who spent a semester in the Andes Mountains, in a Quechua-speaking village. But the student was a double major in cultural communication and Spanish, so she couldn’t understand the language and communicate with the natives.

When she came back and told Sullivan about the visit she was only able to describe the surface-level experience, such as what she ate and what people wore in the village. She wasn’t able to immerse herself in the culture because she didn’t have the adequate background knowledge.

“Because she couldn’t speak the language, it was all surface. She was a tourist,” Sullivan said.

Klemm expressed concern about the lack of student and faculty involvement in the creation of the initiative.

“My biggest concern was that it seemed to lack any intellectual content from students and faculty. If it was going to be a vision about the school, faculty and students should have been brought in for feedback,” Klemm said.

Sullivan said this lack of understanding about how much immersive learning goes on at the college could be due to the fact that the college isn’t fully aware of what students are doing. He also said the “clunkiness” of the bureaucracy, and risk management, undercuts students’ ability to conduct certain projects, which deters students from gaining experiential learning that the college is pushing.

He said he’s currently involved in a process of surveying how much undergraduate research has been conducted because no one has ever counted it before.

“We don’t celebrate what we do, we don’t even count what we do,” Sullivan said.

Dave Maley, senior associate director of media relations, said Rochon and Rifkin were not available for comment because the initiative is currently on hold, the school doesn’t know what form it will take when it is brought back into focus.

“The Blue Sky Reimagining initiative has been put on hold until further notice, in order to focus efforts and resources on actions that will lead to a significant advancement in the campus climate for diversity and inclusion,” Maley said.

Sullivan said he wants the administration to improve the Blue Sky initiative by figuring out how they can help faculty to continue to strive in immersive learning.

“As my old man would say, some help would help,” he said.