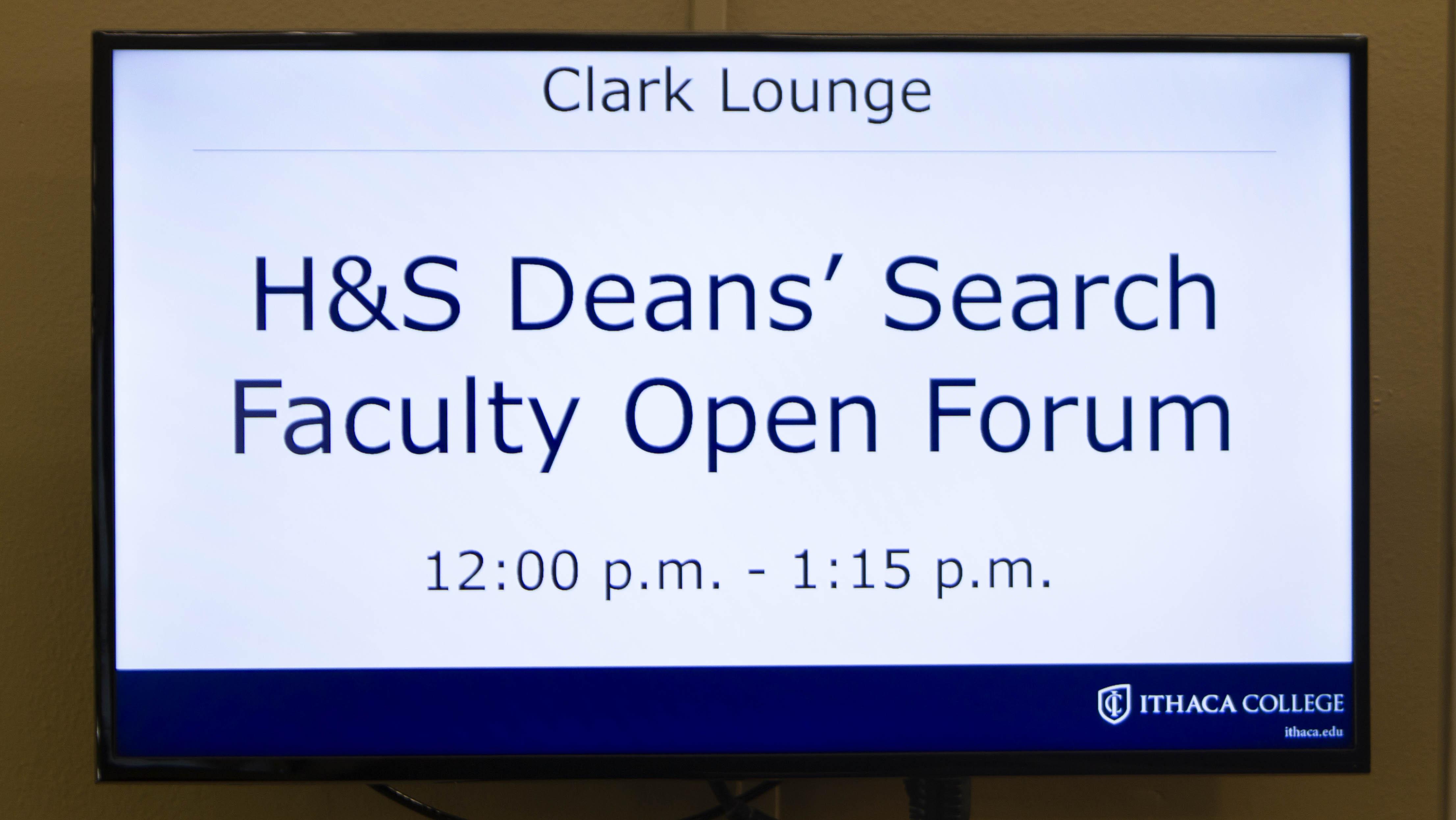 Maxine Hansford/The Ithacan
Ithaca College held four open sessions on Feb. 18, 19, 20 and 21 where students, staff and faculty could meet the finalists for the dean of the School of Humanities and Sciences position.
By Erika Liberati, Mary Rand, Sam Haut — Staff Writers
Published: February 27, 2019

Four open sessions have recently been held for students, faculty and staff to meet the four finalists for a new dean to lead the School of Humanities and Sciences.

The position has been vacant since Vincent Wang stepped down in July 2018. Michael Richardson is currently serving as the interim dean of H&S while the school searches for a permanent replacement. Dave Maley, director of public relations, said The Ithacan could not take photos of or interview finalists for the position, despite it being advertised as an open and public search process, because the presentation sessions are not “media events” geared toward giving media special access to candidates.

The first open session was held Feb. 18 in the Clark Lounge.

Five community members attended the session for the first candidate, Cameron Wesson, who is currently the interim dean for the College of Arts & Sciences at Lehigh University, located in Bethlehem, Pennsylvania. Wesson said he was considering the position at Ithaca College out of an appreciation for colleges that support the needs of undergraduates, having grown discontented with colleges that value graduate research, grants and publications first.

“I do think that Ithaca self–defines — the faculty, the institution — as primarily an undergraduate institution where you can get a transformative experience,” he said.

Students asked Wesson about his plans to engage with students enrolled in H&S and how he would build a sense of community for students of the academically diverse range of departments within the school. Wesson said he would hold events sponsored by the dean’s office to create a sense of engagement at H&S, and overall said he would encourage students in the school to involve themselves in interdepartmental activities, like participating in theater.

“You need to do something that challenges you to flex out of your traditional role,” he said.

The second candidate, Claire Gleitman, women’s and gender studies coordinator and professor in the Department of English at the college, presented Feb. 19 in Clark lounge.

Gleitman said she has worked at the college for the past 27 years and served as chair of the English department for nine years. There was a mix of six staff members and students in attendance.

Gleitman said she wants to create new programs in H&S for both students and faculty to make the school a better place to work.

“I am also invested in trying to be part of creating new and exciting initiatives that might energize both faculty and students — that might highlight some of our strengths and fill in some of our gaps,” Gleitman said. “I’m also interested in doing what I can to think through with faculty, students and staff and address some of the issues of morale that I think we have on this campus.”

Junior Farwa Shakeel asked Gleitman how being an insider at the college impacted her application for the position and how Gleitman might bring cohesion to H&S.

Gleitman said she wants to give H&S students a greater identity through initiatives that she would like to pursue if appointed dean.

“We’ve had so many conversations on how to create more of a sense of H&S identity,” Gleitman said. “I have a number of ideas on how to solve that. It would be nice to have an H&S building. We all know that there are Park Scholars. We don’t have an H&S scholarship program. I think it would be really nice to have a group of students who can say they are an H&S scholar. It would also have the advantage potentially of creating cohorts of students within H&S.”

The third candidate, Melanie Stein, dean of academic affairs and professor in the Department of Mathematics at Trinity College, located in Hartford, Connecticut, presented Feb. 20 in Clark Lounge to an audience of three people.

Stein has served in the dean’s office at Trinity College for approximately six years. Stein is also an Ithaca native. She said she found herself drawn to the position at the college because she feels that her liberal arts experience will benefit the college at such a crucial time in its history.

“It aligns well with my own experience, sort of the liberal arts core of IC, but then you’ve got these other professional schools that just make it more exciting,” Stein said. “There’s this new administration that’s come in and by all counts seems to be moving administration in a positive direction with lots of stress on communication and involving the community in a transparent and collective way. It’s a great moment to step in, and in a way, for me, it’s coming home.”

Stein gave a brief introduction and used most of her time in the session to listen to what students wanted to change within H&S and answered questions.

During the question and answer session, students expressed concerns about a variety of topics, like the separation of students within H&S because it encompasses more than 50 majors. Unlike the other schools at the college, there is no common space for students to gather because classes are spread out across several buildings. Junior Hunter Flamm said this was one of his main concerns coming into the meeting.

“H&S majors have a tendency to be stuck on an island within their own majors,” Flamm said. “They sometimes never have any contact with each other and they’re kind of stuck in their departments, which is understandable because that’s where 90 percent of your classes might be.”

The final candidate for consideration was Kate Drowne, English professor and the associate dean for academic affairs in the College of Arts, Sciences, and Business at Missouri Science and Technology, where she has worked since 2000. Drowne presented Feb. 21 in Klingenstein Lounge. There were three members of the college community in attendance.

Drowne told those in attendance about her time spent at Missouri Science and Technology and how she would develop H&S to adopt its own identity.

“What I’ve learned today is a lot of students in H&S identify primarily or exclusively with their department and don’t think very much about their identity with the school in the ways that’s different if you’re in the [Roy H. Park School of Communications] or the School of Music,” Drowne said.

Senior Emma Rothschild asked Drowne how she would make classrooms in H&S more diverse and inclusive for students and faculty. Drowne said that as dean she would try to make the classroom environment open to diversity, while also promoting bystander intervention programs.

“In a leadership position, you can establish expectations of civility and welcomeness and make it clear that sexist comments and homophobic comments — or whatever is out of bounds in a civil, welcoming environment — is not welcome,” Drowne said. “One of the most powerful tools in the university community is bystander intervention.”

MaryAnn Taylor, executive assistant to the provost and vice president of educational affairs, said the provost and search committee will announce the next dean of H&S in mid-March.

School of Humanities and Sciences dean steps down July 1