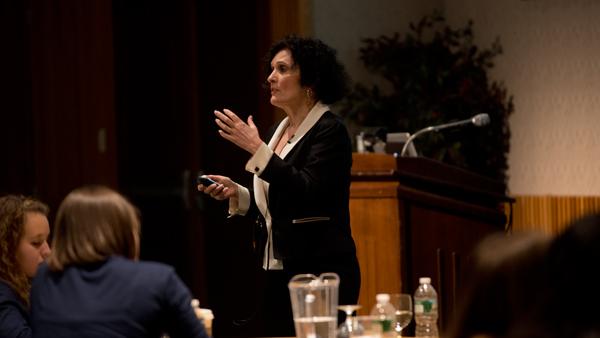 The president of the American Speech-Language-Hearing Association, Patricia Prelock, visited Ithaca College on Saturday and addressed more than 100 students about autism spectrum disorders in children.

The 2013 NSSLHA Conference was hosted and co-sponsored by the college’s chapter of the National Student Speech Language Hearing Association.

Other organizations sponsoring the conference were the SUNY-Cortland chapter of NSSLHA and the New York State Speech-Language-Hearing Association. The workshop, titled “Facilitating Communication and Social Interaction: Implications for Theory of Mind Assessment and Intervention in Autism,” was held Saturday in Emerson Suites.

During the workshop, Prelock discussed the use of parent, report and broad-based theories of mind measures to assess Theory of Mind in children with autism spectrum disorders. Theory of Mind is described as a person’s ability to connect emotional states to themselves and others in order to understand that other people may have different beliefs, desires or intentions from them.

Senior Melanie Burian, president of the Ithaca College chapter of NSSLHA, said autism is a prevalent issue in society and relevant to many departments other than just speech pathology.

“We wanted to make sure we could reach out across different disciplines, so we really tried to target it toward education, psychology, any of the health and rehabilitation science departments,” Burian said. “Autism is something that is so prevalent. People are starting to become more aware of autism spectrum disorder, so we really wanted to do something that people would go and get some information.”

The college hosts the NSSLHA conference every two years, and in the off years, SUNY-Cortland hosts it, Tina Caswell, clinical instructor of Speech-Language Pathology and Audiology and NSSLHA faculty adviser, said. Caswell said the conference was attended by a mix of professionals and students, and said the event was a success.

Caswell said speech language pathologists, commonly known as speech therapists, work with individuals on language difficulties like voice disorders, stuttering or alternative communication strategies, such as communicating through a computer.

The college’s chapter of NSSLHA is a professional club, made up of about 55 students, that helps prepare students who are going into the field of speech pathology. Caswell said the club supports students who hope to be speech pathologists and allows students to implement some of their knowledge about speech language pathology with community members while working in the college’s Speech and Hearing Clinic, located in Smiddy Hall.

“It [NSSLHA] truly just is a stepping stone from a national student club to a professional club when they graduate and begin their years of employment as a speech pathologist … it helps them move forward in their careers,” Caswell said.

Prelock spoke about ASD and her research about intervention and assessment with children on the autism spectrum, and Caswell said the information benefited her professionally.

“It was very helpful for me as a professional, because we work in a speech and language clinic on campus, and it was really helpful for some of the clients that we’re working with at our clinic presently,” Caswell said.

Sophomore Cassandra Stolting, speech-language pathology student and NSSLHA member, said she is interested in the topic of autism and said attending the conference was a beneficial experience. Stolting said she works at a summer camp for children on the autism spectrum and the information she learned during the conference will be helpful in her future career.

“Even though it is related to my major, I think anyone could really have benefited from the information that we learned, and I definitely took what I learned and kind of compared it with my experiences with working at the camp for children on the entire autism spectrum,” Stolting said. “It was just a great experience and I’m really glad that I went.”