IC mock trial team to advance in next level of competition 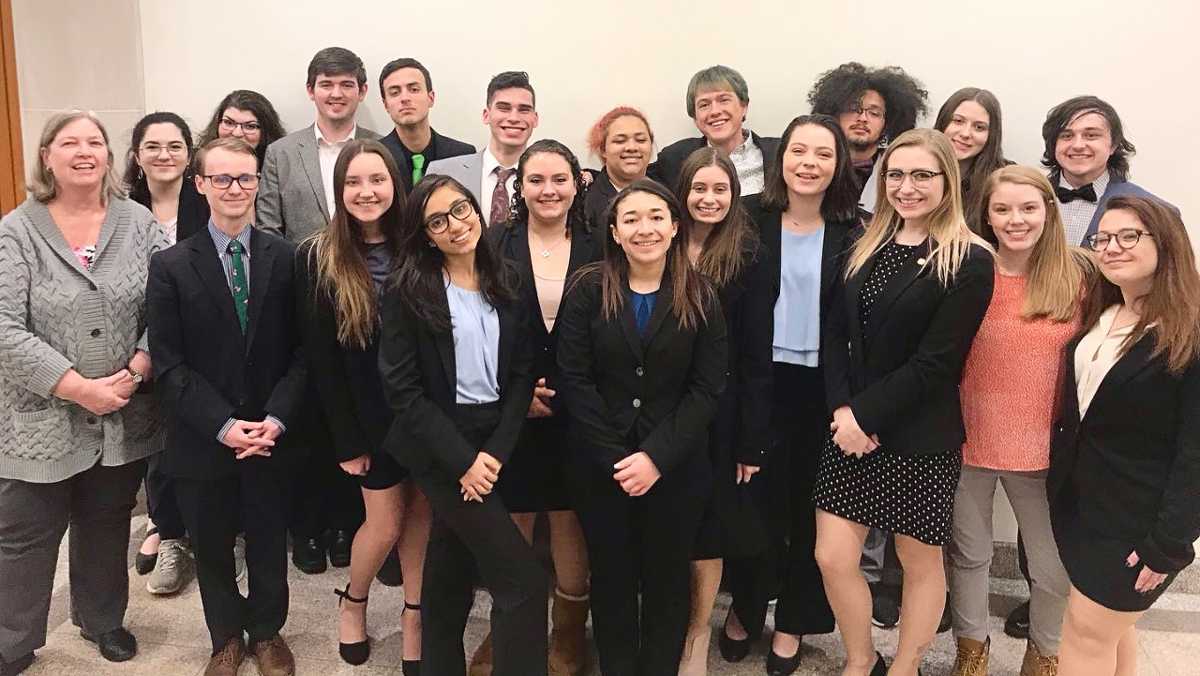 Courtesy of Ava Giaquinto
Ithaca College’s Mock Trial Team attended the Chestnut Hill Regional Tournament on Feb. 22 and 23 at Boston College in Chestnut Hill, Massachusetts. Its A-Team will be advancing to the Opening Round Championship Series Tournament (ORCs) on March 14 and 15 at Princeton University in Princeton, New Jersey.
By Caitlin Holtzman — Staff Writer
Published: March 3, 2020

During the nearly six-hour bus ride back from Boston, the Ithaca College’s Mock Trial members felt anxious about whether they would advance after the regional tournament they competed in Feb. 22 and 23.

It was not until two days later on Feb. 25 that the team heard that its A–Team will be advancing to the Opening Round Championship Series Tournament (ORCs) on March 14 and 15 at Princeton University in Princeton, New Jersey. This announcement came after the team placed 7th at the Chestnut Hill Regional Tournament on Feb. 22 and 23 at Boston College in Chestnut Hill, Massachusetts, said senior Alicia Armstrong, president of the college’s mock trial team.

“We had a lot of pressure to try and move on again this year,” Armstrong said. “It’s definitely a relief to say that we do get to go on.”

Typically, each college divides their team into two groups, A–Team and B–Team, and members are decided based on experience levels. Often the A–Team is dominated by juniors and seniors, whereas the B–Team consists of freshmen and sophomores. Both teams at Ithaca College are led by seniors of the club with Armstrong directing the A–Team and senior Luke Miller directing the B–Team.

Mock Trial works under the Department of Politics at the college and has been advised by Andrea Mooney, clinical professor in the Department of Law at Cornell University, for the past two years, said senior Kelsey Shaffer, the team’s communication director.

The Ithaca College team has advanced to ORCS for the past two years. Both years it did not advance to nationals.

On the second day, the A–Team competed against Brown University and the University of Massachusetts Lowell. Ithaca College lost to Brown, but tied with Lowell, Shaffer said.

The case they were assigned was State of Midlands v. Jordan Ryder, which is a criminal case where Ryder is accused of murdering their 12-year-old child who is disabled by pushing them off a cliff while on a strenuous hike. Each prosecution team had to prove that Ryder, the defendant, was guilty beyond a reasonable doubt, which is the highest standard in the United States legal system, Shaffer said.

The prosecution side has the option to charge the defendant with either aggravated murder or involuntary manslaughter child endangerment, Shaffer said. The teams come into the tournament not knowing what their opponents will charge until right before the trial, so the prosecution has to prepare two separate defenses, Shaffer said. The laws used in Mock Trial are based on federal rules of evidence.

The goal of the tournament is to give the best performance, rather than winning the case, Shaffer said.

The A-Team’s witness, freshman Daniel Santana-Gonzalez, won an outstanding witness award at the tournament for his witness role for the defense team, Shaffer said.

The two judges in the trials score each individual team member on their performances. Members are scored on a scale from one to 10 for each role they play. At the end of the trial, the total of all the teammates’ scores makes up the team’s ballot. Whichever team has the highest total ballot scores wins that round, Shaffer said.

Shaffer is an aspiring lawyer and will be attending law school in the fall, although she has yet to commit to a school. She said being in Mock Trial has prepared her for her future career.

“It’s really helped with public speaking and working with a team,” Shaffer said.

Although there was pressure to move forward, Armstrong said she tried to keep the team’s morale high by focusing on enjoying the experience rather than worrying about winning.

“If we didn’t go on, we would’ve liked to say that we went out there, did everything that we could to the best of our ability and that we’re proud of what we did,” Armstrong said.

To move forward from regionals to ORCS, the team has to win at least five ballots against the other teams, Shaffer said.

The B-Team is not moving forward to ORCS, however, some members may be pulled up to A-Team, Miller said. Miller said his overall goal at the tournament was to see improvement in his team.

“The improvement our B-Team alone has had this year was absolutely phenomenal,” Miller said.

Armstrong said she thinks the A–Team that will compete in ORCS is strong.

“At ORCS, we’re aware that we’re about to go against very difficult teams,” Armstrong said. “We would like to think that this year we have a very good chance. I am very proud of the team that I get to compete with.”