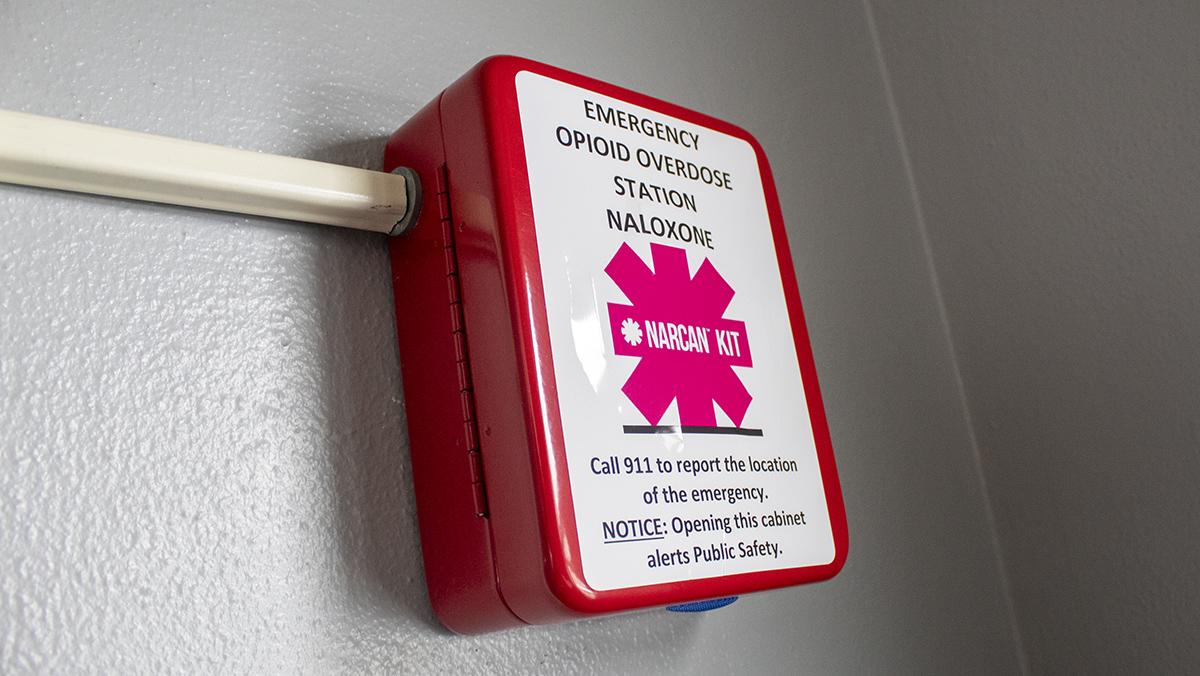 Malik Clement/The Ithacan
. Naloxone is provided to the college by STAP and is found in boxes, which are connected to the campus police, throughout campus buildings and residence halls. Once one of the boxes is opened, the campus police are automatically called.
By Olivia Stanzl — Assistant News Editor
Published: April 20, 2022

As drug overdoses increase within the United States, different methods of helping those who suffer from dependence on drugs have been implemented around the nation. Ithaca College has implemented educational opportunities to keep the campus community informed and safe.

While drug overdose deaths were already on the rise, the Centers for Disease Control and Prevention (CDC) found that the COVID-19 pandemic accelerated overdose deaths. According to the CDC, from March 2020 to April 2020 there were 2,146 overdoses, and from April 2020 to May 2020 there were 3,388 overdoses across the United States, making it the largest monthly increases in overdose deaths since estimates began to be calculated January 2015. During the 2021 year, New York state, excluding New York City, had a total of 1,121 opioid overdoses and Tompkins County had nine from January to June 2021.

Michelle Goode, program director in the Center for Counseling, Health and Wellness, said it is essential for the college to be a community that supports one another. Goode said one way to do that is to attend opioid overdose trainings that are held for the campus community through partnership with the Southern Tier AIDS program (STAP).

“Part of that is looking out for folks and making sure that they’re safe, or as safe as they can be,” Goode said. “And certainly, we know that there might be substance use happening on a college campus. So, we want to make sure that folks are prepared and ready to recognize what might be the signs of an overdose, or alcohol poisoning.”

Kim Conrad, harm reduction site coordinator for the Western Region at STAP, has been holding opioid overdose prevention trainings at the college since 2018. Through these programs they teach the campus community how to prevent deaths caused by overdose, like how to properly use naloxone, a medicine that quickly reverses an opioid overdose. Naloxone is provided to the college by STAP and is found in boxes, which are connected to the campus police, throughout campus buildings and residence halls. Once one of the boxes is opened, the campus police are automatically called.

Due to the Good Samaritan Law, an individual who gives naloxone to someone who overdosed and was also using or possessing drugs cannot be arrested.

At the college, students who violate the substance policy on campus, including those who need hospital treatment, must go through Balancing Alcohol & Substance Use to Improve College Success (BASICS), a program which helps students balance their substance use.

Conrad’s work focuses on harm reduction — a public health strategy that is an alternative method to abstinence. Conrad said the point of harm reduction is to put the value on people, rather than the substances that they are using.

“Harm reduction acknowledges that drug use is a part of the human experience, and that people who use drugs are people who deserve respect and dignity,” Conrad said.

In 2001, Portugal implemented harm reduction policies and decriminalized illegal drugs after having the highest rate of HIV infections in the European Union and one in 10 citizens had heroin addictions. Since enacting these changes, the number of HIV infections caused by injection drug use has gone down by more than 90%, according to the American Psychological Association.

Conrad also said many of the harms that are associated with illegal drug use do not occur solely because of the drug.

“Harm reduction is about recognizing that many of the harms that are associated with illegal drug use come from the illegality and the stigma and the criminal punishments associated with it, rather than the substance themselves,” Conrad said.

“Because [people who use drugs] inject, there is a higher risk of spreading blood-borne diseases like HIV and hepatitis C,” Conrad said. “The illegality of heroin is discouraging people … from getting the clean supplies that they need.”

“When people use a pipe to smoke a substance, they could burn their lips, and they could pass that pipe on to other people, and in doing so could also be passing blood-borne pathogens from an open sore on the lips,” Conrad said.

In 2018, Svante Myrick, former Mayor of the City of Ithaca, asked for New York Gov. Andrew Cuomo to approve Ithaca to be a pilot site for overdose prevention facilities. An overdose prevention facility is a site where people can use drugs while being supervised by medical professionals. Cuomo approved four pilot sites in New York City, but only two have opened as of January 2022 — one in East Harlem and the other in Washington Heights. Both Cuomo and Myrick have since resigned from their positions. Overdose prevention centers are illegal under the Anti-Drug Abuse Act of 1986.

The college has an Alcohol and Other Drug Prevention Team that works to reduce substance use and related harm at the college. The team’s membership, with Goode as the team’s chair, works to create policies, practices and programs for the campus community.

Goode said this year one of the group’s focuses was on students who are recovering from substance-use dependencies.

“How can we, as a community, be supportive to those folk?” Goode said. “Since they’re living in an environment that is kind of promoting a party culture, it can be difficult and even triggering for someone who is trying to abstain from using.”

Stewart Auyash, associate professor in the Department of Health Promotion and Physical Education, teaches the course War on Drugs which explores questions like why people use drugs. The War on Drugs is a government initiative that started in the 70s and is still occurring today, and works to stop illegal drug use and trade by increasing drug related prison sentences. The initiative impacted different racial groups unequally and disproportionately targeted men of color, specifically Black men.

Auyash said it is important for people to be open and honest about their drug use.

“I think most people are drug users,” Auyash said. “By stigmatizing those students, or faculty, or staff or anybody in the community who uses drugs that are considered illegal, is bad.”

Sophomore Joshua Mollo, a clinical health studies major who is currently taking the War on Drugs class, said that during his time at the college, he has noticed that drug use is common, but recognizes that students are often afraid to ask for help because of the negative stigma around drug use.

“I just feel like in general students, or just anyone who is a drug user … are scared to reach out for help,” Mollo said. “And it is help that they probably do want and need, but they don’t feel like they can reach out to anyone.”

The City of Ithaca Police Department released a statement in March that warned of the distribution of opioids that were disguised as cocaine, which could result in overdoses.

“The Ithaca Police Department is aware that drugs being sold as cocaine in our area do not, in fact, contain any cocaine, but instead, contain opiates,” the statement said. “This can cause individuals to overdose, potentially fatally, and thus the IPD would like to urge caution to anyone addicted to or using narcotics recreationally.”

Many overdoses are caused by fentanyl, a synthetic opioid that gets added to drugs sold illegally because it makes costs cheaper and makes drugs more powerful and addictive.

“Overdose can happen because someone thought they were using one substance and it turned out there was something else,” Conrad said. “The person deserves a lot of sympathy and a lot of empathy.”

Auyash said the illegality of some drugs also fuels the negative stigma toward people who use drugs.

“To throw the word addict around I think is unfortunate and I’d rather call them substance users, and when you say it that way, we’re all substance users,” Auyash said. “I prefer a world in which most of those drugs are legal, safe, affordable and accessible.”

Drugs are classified within five different schedules, schedule one being the highest potential for abuse and physical dependence. Currently, the United States Drug Enforcement Administration (DEA) classifies meth within the same schedule as marijuana. Marijuana can be used medically to help with chronic pain, but meth is highly addictive and causes organ failure.

“If drugs were decriminalized and even legalized and people can get a prescription for them, people wouldn’t have to steal anymore, they wouldn’t be in jails anymore,” Auyash said.

Conrad said the criminalization of drugs has had unequal outcomes across different racial groups.

Nearly 80% of people in federal prison and almost 60% of people in state prison for drug offenses are Black or Latino, according to the Drug Policy Alliance.