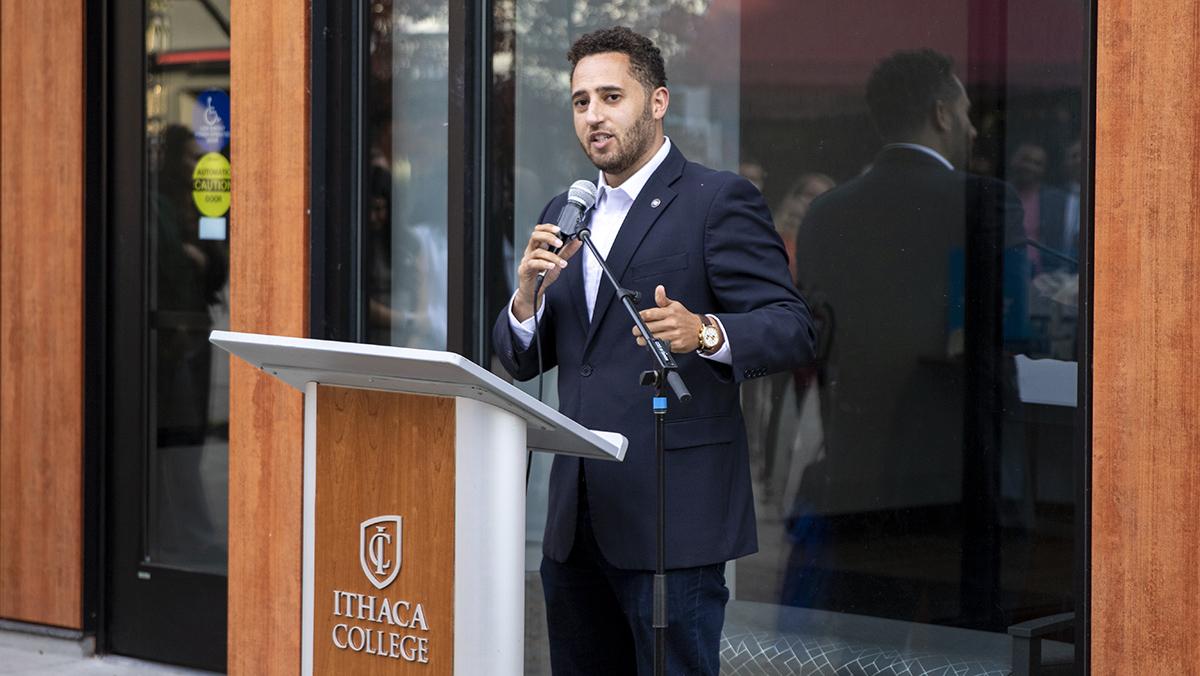 Svante Myrick, Ithaca’s youngest and longest serving mayor will resign Feb. 6 after 10 years of service. Throughout his tenure, Myrick had worked closely with Ithaca College leaders and faculty.

Myrick, a Cornell alum, announced his resignation Jan. 5, saying that he had accepted a leading position at People for the American Way, a major progressive advocacy group in Washington, DC. Myrick cited the ongoing attacks on democratic norms by Republican lawmakers ahead of the 2022 midterms as his reason for accepting the position. Myrick will be replaced by Common Council Representative Laura A. Lewis.

“I love Ithaca,” Myrick said in his announcement. “I’ve loved serving this city, and I believe my service has made a difference. It’s been the honor of my lifetime to serve as the 44th mayor of Ithaca — and the longest serving mayor in our history.”

In a statement to The Ithacan, La Jerne Cornish, Ithaca College interim president, praised Myrick’s time as mayor, including his involvement in establishing the college’s new Physician Assistant Studies Program, which is located on The Commons. The Physician Assistant Studies Program was launched in October 2021 and offers a 27-month Master of Science program for 30–50 graduate students.

“Just as the City of Ithaca has been graced with Svante’s leadership, Ithaca College has been graced with his friendship, support and advocacy,” Cornish said. “Most recently, Svante was a key partner in establishing the college’s presence on The Ithaca Commons with the opening of our physician assistant program facility — a major moment for this institution.”

During the first year of the COVID-19 pandemic, Myrick collaborated with the administrations of both Cornell University and Ithaca College to navigate the pandemic’s economic and academic fallout in Ithaca. Since Ithaca is a college town that brings in about 30,000 students, the closures of both schools hit Ithaca’s businesses particularly hard. Myrick also oversaw the passage of Ithaca’s Green New Deal, which will transform the city’s energy system to be 100% decarbonized by 2030.

“Ithaca is a college town and by dint of his service to this community, Svante has enriched the lives and experiences of our students, faculty and staff,” Cornish said. “On behalf of Ithaca College, I offer Svante our deepest gratitude, and I cannot wait to see how he shines in his new role leading People for the American Way.”

Senior Jonah Robertson said that while he grew up just outside Ithaca, he had visited the city frequently since he was around seven years old because both of his parents grew up in the area. After Ithaca elected Myrick as mayor of Ithaca in 2012, Robertson said he began to notice the effects of his governance.

“I remember when Svante came through and redid the traffic system in places like the Octopus,” Robertson said.

The Octopus is a nickname used by Ithacans for a complex intersection of multiple byways in western Ithaca that experiences frequent traffic congestion. Under Myrick’s leadership, the city passed numerous plans for transportation revitalization, some of which address The Octopus.

Senior Leticia Guibunda is the vice president of Campus Affairs at the college’s Student Governance Council (SGC). Guibunda said as one of the leaders of SGC, she supports many of Myrick’s efforts to improve the city, like the renovation of The Commons as well as his prioritization of public safety. After former Gov. Andrew Cuomo signed an executive order requiring police reform, Myrick’s administration passed legislation to replace the Ithaca Police Department with an office of the Department of Community Solutions and Public Safety.

“One thing that was really important to me was the issue of public safety,” Guibunda said. “It’s one of the reasons why I got involved in student government to begin with. One of the things that I was always really impressed with and admired about the mayor is his commitment to public safety in Ithaca.”

Guibunda is an international student from Brazil. Guibunda said when she first visited Ithaca with her mom, they thought Myrick was a vibrant leader and were impressed by his renovations on The Commons.

“While it’s a loss for the City of Ithaca to lose somebody who has been such a great leader for a long time now, I do think it’s a great thing that he’s pursuing,” Guibunda said.

“I remember him coming through to our school and giving interviews throughout the hallways and introducing himself,” Robertson said. “He was from the same … kind of background as me, as in coming from nothing to going to something. I felt like ‘Oh, this person came from the same high school and came from the same roots as me.’ That was really good.”