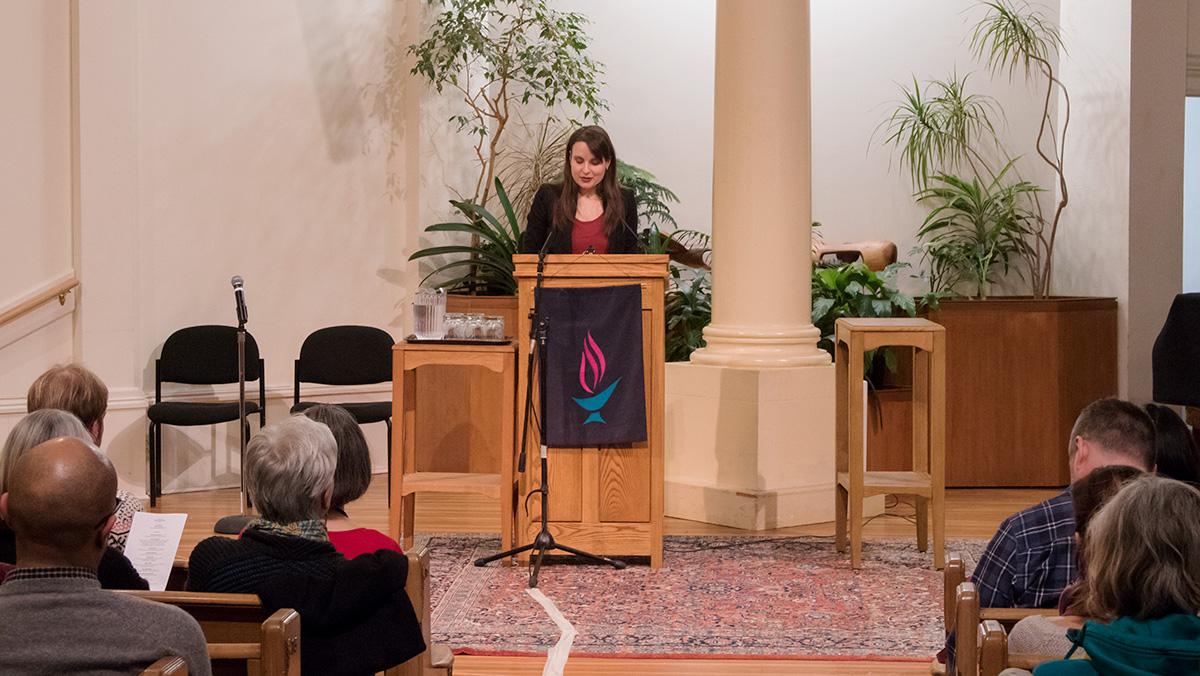 Sophia Tulp/The Ithacan
More than 150 people packed the chapel of the First Unitarian Church, and latecomers had to pull up chairs and stand along the back walls. The reading doubled as a fundraiser for Ithaca Welcomes Refugees, a local organization preparing to assist refugees being placed in Ithaca this spring.
By Sophia Tulp — Print Layout Editor
Published: January 18, 2017

Saviana Stanescu, a Romanian playwright, poet and assistant professor in the Ithaca College Department of Theatre Arts, opened with the words of Maya Angelou’s “Inaugural Poem” at a literature and poetry reading Jan. 15.

Here on the pulse of this new day

You may have the grace to look up and out

And into your sister’s eyes, into

Your brother’s face, your country

Stanescu was one of nine local writers who participated in Justice for All: A Writers Resist Reading at the First Unitarian Church in Ithaca. Organized primarily by professors in the Department of Writing at the college, the event was one of 80 across the country and Europe and Asia held by chapters of the “Writers Resist” collective.

Writers Resist formed shortly after the 2016 presidential election to oppose “that which attacks or seeks to undermine those most basic principles of freedom and justice for all,” according to the Facebook event.

The movement began after New York poet Erin Belieu posted Nov. 14 on Facebook, “We will not give in to despair. We will come together and actively help make the world we want to live in. We are bowed, but we are not broken.”

Belieu called for writers to organize local events on Martin Luther King Jr. Day to read historical and contemporary writings on the ideals of democracy and free expression.

Jack Wang, associate professor in the Department of Writing, helped spearhead the creation of the Ithaca chapter of Writers Resist shortly after the election of Donald Trump on Nov. 8. Wang said he pulled from the wealth of writers in the Ithaca community to gather readers for the event.

“The toughest part of organizing this was choosing the writers because there are so many writers,” Wang said. “We wanted to represent the different literary communities of Ithaca … Ithaca College, Cornell [University] … Ithaca City of Asylum and also people with activist roots.”

More than 150 people packed the chapel of the First Unitarian Church, and latecomers had to pull up chairs and stand along the back walls. The reading doubled as a fundraiser for Ithaca Welcomes Refugees, a local organization preparing to assist refugees being placed in Ithaca this spring.

Organizers collected donations, and Buffalo Street Books sold copies of the readers’ work, with 10 percent of the profits going toward Ithaca Welcomes Refugees.

Jaime Warburton, assistant professor in the Department of Writing, moderated the event. She said the successful turnout was due to the broad array of writers represented, from activists to poets to scholars.

“Anybody who’s ever attended a poetry reading … you’ll see that there are three people in the audience and then the person reading their own work, and it can get kind of disheartening once in a while, but today, I think there was so much involvement … because it truly was something that goes across the spectrum,” Warburton said.

Included in the lineup of writers were Dubian Ade ’14, a poet and activist who has performed at both the college and Cornell in the past; Michelle Courtney Berry, a poet, playwright and author who graduated from Cornell and has opened for Angelou, Howard Zinn and the Dalai Lama; Sorayya Khan, an author and Fulbright research award recipient; Christine Kitano, poet and assistant professor of writing at the college; Tish Pearlman, award-winning poet and activist from California; Bob Proehl, an author and 2012 New York Foundation for the Arts fellow; Dan Rosenberg, author, translator and professor at Wells College; Raza Rumi, writer in residence hosted by the Ithaca City of Asylum and scholar in residence at the college; Stanescu; and Helena Maria Viramontes, author and director of the creative writing program at Cornell.

The readers presented works both foreign and domestic from authors, poets and musicians, ranging from Angelou to Bob Marley. Berry led the crowd in a rendition of Marley’s “Redemption Song,” with the audience’s pitching in on the chorus, filling the chapel with the melody.

Kitano read “To This Day” by Lawson Fusao Inada, a Japanese-American poet who wrote about the internment camps of World War II.

“Unfortunately that topic has become more relevant recently, so I really wanted to read something by him,” Kitano said. “It’s one of those poems … where he talks about coming together, and that’s what we were trying to focus on at this event. It wasn’t about dividing people.”

Junior Elizabeth Alexander attended the event with a group of students from the college. She said the highlight of the event for her was Proehl’s poem “How to Cook a Wolf.”

“I thought that it would be a good opportunity to hear from our local authors while also reconnecting with social activism,” Alexander said. “I was reminded that art seems like the best way to encourage inspiration and transformation.”