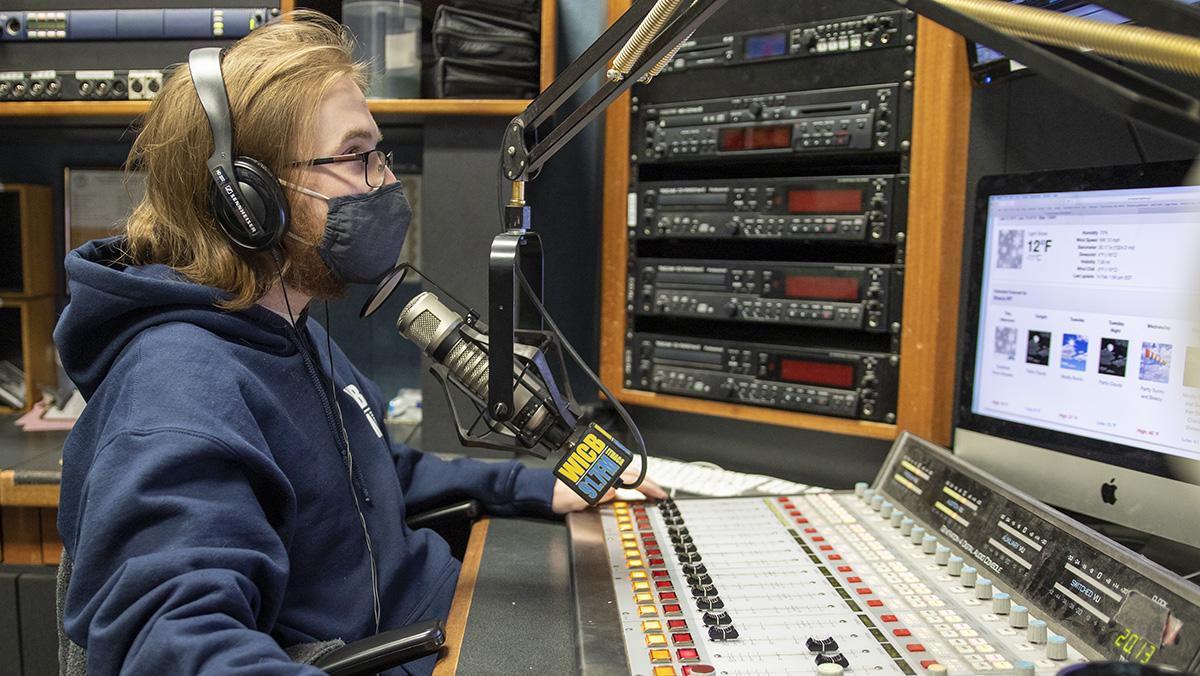 Brooke Vogel/The Ithacan
Junior Connor Hibbard is the station manager for WICB and a TVR major. Hibbard has been taking part in the radio stations since he was a freshman. Hibbard said he is not in favor of the name change because it pushes radio to the background.
By Olivia Stanzl — Assistant News Editor
Published: February 16, 2022

For decades, Ithaca College students have been graduating with a degree in Television-Radio (TVR), but starting in Fall 2022 current and incoming TVR students will now be studying under the name ‘Television & Digital Media Production’ (TVDM).

The TVR degree offers courses in different areas of media like video, audio and writing. The college’s TVR degree will be called TVDM to better reflect the curriculum and the job market, according to an email from Steven Gordon, associate professor and TVR program director. TVR students were made aware of this change Jan. 18.

“I wanted you all to know that our degree was approved for a name change that we have been working on for some time,” Gordon said. “Our name better reflects our up-to-date curriculum and how we prepare students for the ‘exploding’ job market in digital story-telling.”

Jack Powers, interim dean for the Roy H. Park School of Communications, said changing the name of TVR has been a topic of discussion among faculty for years. He also said the program was not approved for the name change until TVR faculty and staff talked to members of the campus community like alumni, current students and prospective students. The program also consulted different departments on campus like admissions, marketing and enrollment, philanthropy and engagement, alumni affairs, the dean’s office, the provost and the president. The department even had to be approved at the state level from the New York state Education.

Powers said the biggest reason for the name change is that it will be a more appropriate descriptor of what the degree offers.

“TVR is one of the degrees that always graduates more students than come in, because nobody knows what it is coming in, and then they figure it out and cross over,” Powers said. “I think the new name, Television and Digital Media Production, will help to more accurately describe what the degree is.”

Gordon said the name change has the potential to help students land jobs after graduation. From 2020–2030 media and communication occupations are projected to grow 14% according to the U.S. Bureau of Labor Statistics.

“That digital title in their degree may help them even more in the job market,” Gordon said. “In any marketplace from Portland, to New York, to Los Angeles to Seattle, wherever it is, probably 70% or more of the jobs are called digital content or digital producers. That’s the term today for making media, so we felt that we really needed to come up to that level and have that in our title.”

Shosh Bedrosian ’19 studied TVR during her time at the college. Bedrosian said she was unaware of the degree title change, but she thinks it could benefit future graduates within the major.

“The industry jobs really change,” Bedrosian said. “It has changed just in the last few years that I’ve been in it. There’s a lot of digital components so I think that [the name change] actually broadens the spectrum for the major. It really broadens how the industry is going.”

Not only will the degree title be changed, but courses as well. Gordon said that while the curricula taught will remain the same, classes like “Field Production” will be retitled to better reflect the current age of media.

“‘Intro to Field production,’ that’s a very old title from the ’70s, so that’s being called ‘Intro to Video Production,’” Gordon said.

Powers said that while the term “radio” is becoming outdated, streaming radio is very popular.

A report published in February by Statistica said that over the past few years, the average daily time spent listening to the radio decreased from 111 to 99 minutes. The study found that the travel restrictions and shift to working at home because of the COVID-19 pandemic impacted this number.

“Things like Spotify and podcasts, that’s radio, but we don’t call it radio today, that’s digital,” Powers said. “So that’s the difference. WICB and VIC, that’s still a central part of what we do that’s never going to change. We’re just expanding on that so that it includes things like podcasting, streaming, things that are digital in nature and not just terrestrial broadcast.”

The college has two radio stations, WICB and VIC. WICB has music, news, sports and podcasts. VIC is the college’s internet-only radio station and is operated by student DJs, newscasters and sportscasters.

Junior Dylan Brown is on the executive staff of WICB as the local music director and is a TVR major.  Brown said he will continue to refer to his degree as TVR.

“I think it [the name change] has been a long time coming, to be completely honest,” Brown said. “As far as I know in the TVR curriculum there aren’t any radio classes specifically.”

Jeremy Menard, the television and radio operations manager, is also the staff adviser and general manager for student-run media organizations ICTV, WICB and VIC. Menard said that despite the name change the Park School is still a good fit for prospective students interested in radio.

“You can still have a path to take courses that prepare you for a career in radio such as audio production courses, on–air performance classes, writing for media and of course you have all the great radio stations,” Menard said. “In the last couple of years WICB has even been named the No. 1 [4-year college] radio station in the country. So I think there’s a lot of ways you can get involved and still have a really, really fulfilling experience here.”

Junior Connor Hibbard is the station manager for WICB and a TVR major. Hibbard has been taking part in the radio stations since he was a freshman. Hibbard said he is not in favor of the name change because it pushes radio to the background.

“WICB and VIC are both incredible, award-winning institutions and they will absolutely stay that way,” Hibbard said. “I don’t anticipate us losing any resources or support or anything and we’re going to continue to be the best college radio stations in the country. But, it does start to bury that for new people coming in, it doesn’t put it at the forefront. I want to see as many people get recruited and fall in love with radio as possible.”

Powers said the new name encompasses all forms of broadcast, rather than just traditional radio broadcasting.

“Radio is here to stay,” Powers said. “Radio is a big part of our history and it’s a big part of our future. I think it’s important, especially in a world of media that is ever changing for the Park School to change with it. And I think this is exactly what programs should be doing, is examining their curriculum, examining their name, and making sure that what they do is appropriately described.”

IC alum works in the White House with Biden administration